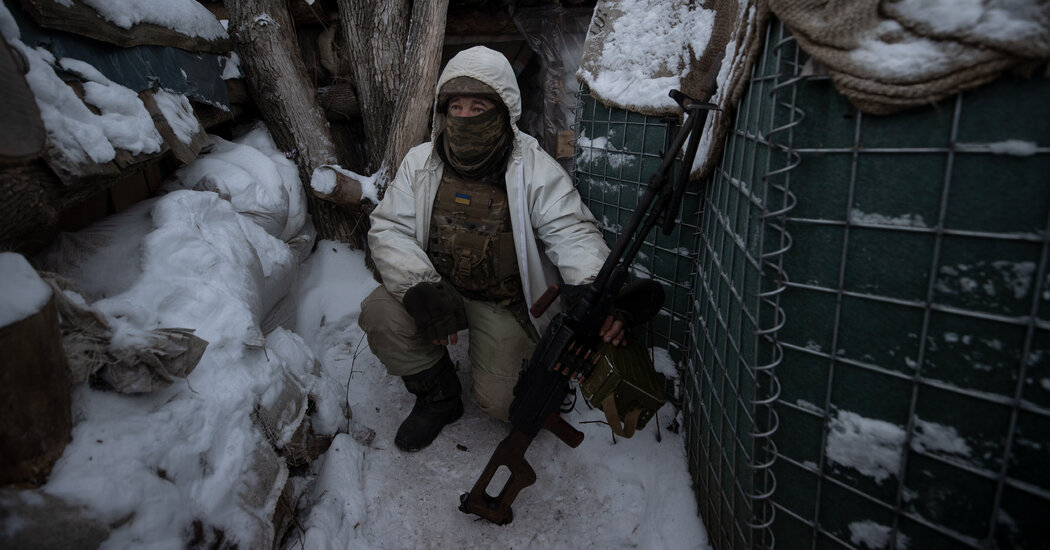 Above ground, plastic sheeting claps in a freezing wind. With separatist trenches close by, in a tree line across a snowy field, the only truly safe place is underground.

Nothing about the unit suggests a connection to NATO other than the name, Lima, which is the NATO phonetic alphabet designation for the letter L. Under an overhaul as part of Ukraine’s aspiration to join the alliance, military units were renamed according to NATO standards.

The conflict is fought mostly with rifles, machine guns, rocket propelled grenades, mortars and artillery systems dating to the 1970s or earlier. The United States has sold Javelin anti-tank missiles to Ukraine since 2018, but they are intended mainly to repel a broad Russian attack, not for use on the front. Turkey provides another of the country’s newer weapons, the Bayraktar TB2 armed drone, but the Ukrainian military has acknowledged using it only once in combat, last October.

Still, military analysts say the force is in far better shape than in 2014, when Russia annexed the Crimean Peninsula and fomented the war in the east. The United States has provided $2.7 billion in military assistance in the years since. In recent weeks, it authorized Lithuania, Latvia and Estonia to send American-made Stinger antiaircraft missiles to Ukraine, and Britain has provided guided anti-tank missiles.

And the Ukrainian army is battle hardened. About 400,000 Ukrainian soldiers, including about 13,000 women, have gone through rotations along the eastern front, providing a pool of veteran fighters who might be called up in the event of war. On Tuesday President Volodymyr Zelensky signed an order declaring his intention to add 100,000 troops to Ukraine’s military over three years, and increase soldiers’ pay.

But multiple rotations have also taken a heavy toll, soldiers in this position, who range in age from 25 to 59, said. Pvt. Volodymyr Murdza, 53, is halfway through his second three-year contract. His son is also serving in the war and his wife worries terribly, he said. “She calls and says, ‘I worry because you don’t call me,’” Private Murdza said. “And I say, ‘Dearest, sunshine, I call whenever I can.’”