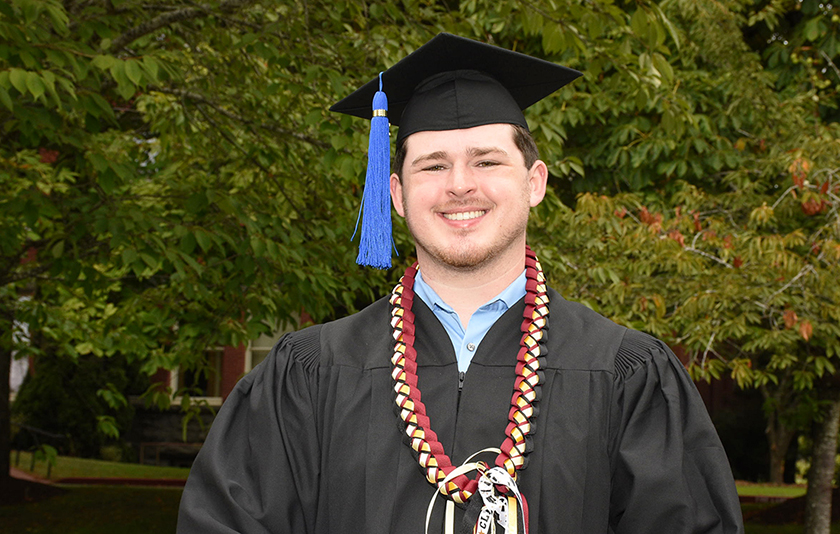 Although Zach Haroian BS/MS ’21 had no plans to enroll in Willamette University’s new dual degree program in data science, he’s now its first graduate — and he landed a job before commencement, too.

Haroian will be an associate machine learning engineer for financial data company PitchBook in Seattle, where he’ll build models to analyze text data like news articles to gauge its value to clients.

Haroian — who is Willamette’s first data science major in addition to being a computer science major and the sole dual degree graduate — said the job is exactly what he’d hoped for years down the road.

“I didn’t think I’d get this far this fast,” he said. “I thought I’d have to get some associate data analyst roles and work up to this point, so I’m amazed and very happy to be in this position.”

Data science wasn’t his first choice. Programming was his primary interest, so he chose a computer science major and assumed he’d make a career of it. But a required statistics class with Albaugh Assistant Professor of Statistics Heather Kitada Smalley changed his mind — he realized he not only loved a subject he used to loathe in high school, he began to see what it could mean for his future.

“It was kind of the missing piece in computer science,” he said. “I’ve always enjoyed programming, but I couldn’t find projects that excited me. Being able to work with data and build models was so much fun.”

Haroian isn’t the only one off to a successful start.

His classmates are finding jobs with financial technology teams and large-scale logistic companies, or they’re using the degree to augment their current career. Data science can be adapted to fit nearly any role, from developing dashboards for key performance indicators on websites to steering wineries toward where their products sell the best.

Although working with data and data visualization is a significant part of the BS/MS program, Executive Director of Computing and Data Science Programs Jameson Watts said it aims to create “humans, not robots” and soft skills — such as ethics, communications and presentation — will be the primary focus.

Every employer he’s talked to said these skills are a major need in the industry, he said.

“Differentiating yourself in this world is important,” he said. “You can do this by focusing on the human aspect of what you want to do and what you’re trying to accomplish. What difference are you making? How is the result of your work going to actually change the way people make decisions?”

Haroian’s ability to communicate to non-technical audiences appealed to employers, as well as his knowledge of natural language processing, which he worked with during his award-winning poster project. His computer science experience also helped — data scientists tend to have backgrounds in math or hard science, but not necessarily coding, he said.

The BS/MS program — as well as the MS in Data Science Program, which share several of the same classes — also gives students an idea of what employers seek. Visiting experts offer their insight on the industry, future job connections and an opportunity for students to practice discussing their work through mock interviews.

“The opportunity definitely adds a lot of value to the program,” said Haroian. “You could always take machine learning classes on Coursera, but you don’t get to actually talk to people in the industry to see how that data comes to life when you’re not working on predefined problems.”

Class projects this past year also had real world relevance. One student created a model that measured the size and performance of banks in Oregon and southern Washington, while another used machine learning to help elementary teachers gauge the difficulty of various texts and more accurately assign readings.

Their discoveries mark just the beginning of the growing degree program. Following the official merger of the Pacific Northwest College of Art with Willamette in June, the program will expand its collaboration with PNCA on more programs related to design and systems thinking. A new class on programming and design is already being offered this fall, and further down the road, more graduate programs will be housed at PNCA’s building in downtown Portland, said Watts.

“We’re very much looking forward to moving and growing into our new space, and figuring out all the ways we can turn this idea of design plus data into valuable insights and products for Oregon and the world,” he said.