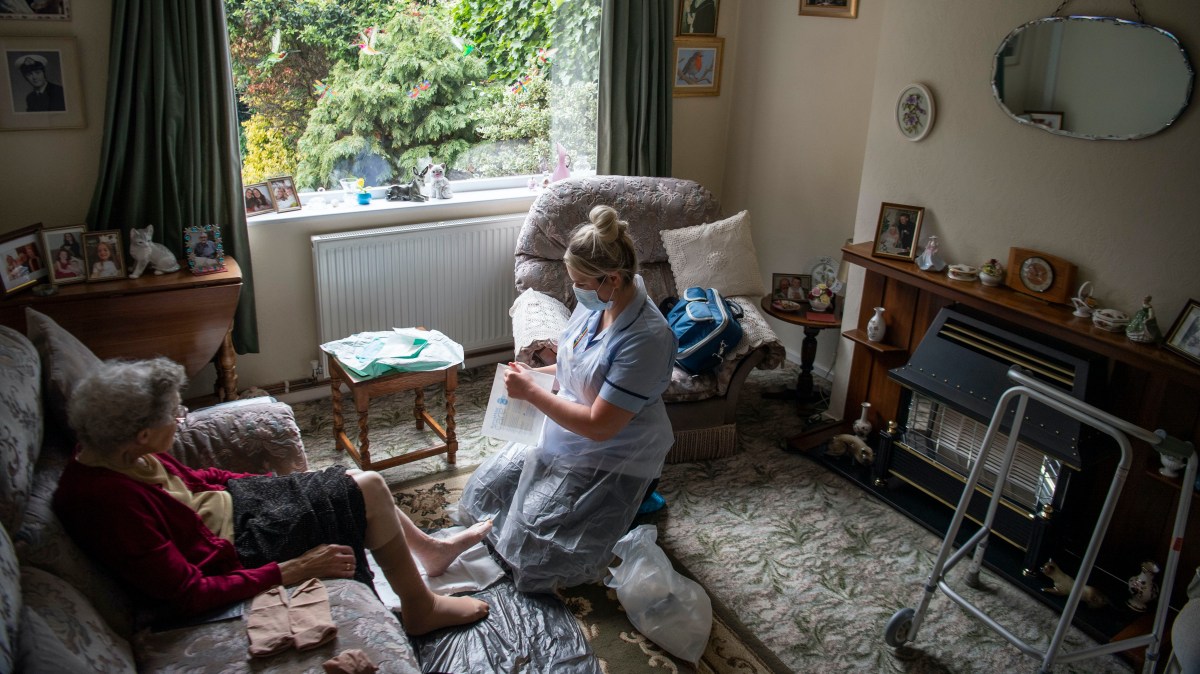 But while demand for in-home health workers is growing, the industry is struggling with a staffing shortage, due in part to low wages. The Bureau of Labor Statistics reports the median annual pay for home health and personal care aides was $27,080 in 2020.

A recent study by PHI National predicts there will be 1 million openings for residential care aides from 2019 to 2029, “more new jobs than any other occupation in the U.S.”

President Joe Biden’s Build Back Better plan would set aside $150 billion for home health care, but would that be enough if the stalled plan was passed by Congress?

“Marketplace” host Kimberly Adams spoke with Ai-jen Poo, the co-founder and executive director of the National Domestic Workers Alliance, about the severity of the issue. The following is an edited transcript of their conversation.

Kimberly Adams: The wages are so low in the home health care sector, but at the same time, we’re constantly hearing from families that are struggling to afford care for their older relatives or people who, in their family, might be struggling with some sort of temporary or long-term disability. How do you reconcile the rising cost of health care that is a problem for so many families while also addressing the low wages in the sector?

Ai-jen Poo: The reality is, we’ve never invested in the ability of families to afford the care that they need. Collectively, we’ve just assumed that individuals and individual families — and mostly the women in our families — will take care of the people who need care. The baby boom generation is aging into retirement at a rate of 10,000 people per day. Coming out of the pandemic, we have this unbelievable opportunity to invest in care, raise the wages of the workers and expand access to these services in the home and community in a way that lays a foundation for the future that we really need in this country.

Adams: Can you give me a sense of the scale of the staffing shortage and what it’s going to look like moving forward?

Poo: Well, in New York in 2019, a report found that about a quarter of all home care patients were unable to find workers. And 20% of home care positions went unfilled because of shortages. And between 2021 and 2040, the state is projected to have nearly a million home care job openings — that is just one state. So we’re going to need millions of home care workers in the coming years, not 20 years from now, literally the next five to 10 years, just to meet the need. And we currently have over 800,000 people on waiting lists waiting for these services in the home and community who are eligible for them. But because the programs are so underfunded, and we have this workforce shortage, we’re not able to get people off the waiting list and get them the care they need.

Adams: I’m struggling here — my economic brain isn’t quite processing. Usually, when there are not enough workers in a particular field, it pushes wages up because those workers are in higher demand and they can demand higher wages. And therefore, more people might go into that industry because those wages go up. Why isn’t that happening here?

Poo: Most home care workers actually work through a program called Medicaid and, and it’s a program, Medicaid Home and Community-Based Services, that supports access to these services in the home and community and the workforce. And if that program isn’t adequately funded, people can’t get access to the services and workers can’t get better wages. We also have an economy where 60% of the workforce earns less than $50,000 per year, and it’s barely a living wage. And so how are those people, those families going to afford the care that they need for their families if they’re barely making ends meet, right? How are they going to afford to pay a living wage? They’re going to rely on public programs, like Medicaid Home and Community Services.

Adams: President Joe Biden’s Build Back Better plan — the agenda for it, at least — would set aside $150 billion to expand access to home care. Is that enough?

Poo: You know, it’s a really good start. It would be a transformative investment in this program. In fact, it would be the single most significant investment in the creation of good jobs that would directly benefit women and women of color in the history of our country. Think about that for a moment. So I would say that this would be a huge step forward and really significant in the lives of the millions of workers who do this work with dedication, dignity, passion and compassion every day, and the millions of families who are counting on those workers.

There’s a lot happening in the world.  Through it all, Marketplace is here for you.

You rely on Marketplace to break down the world’s events and tell you how it affects you in a fact-based, approachable way. We rely on your financial support to keep making that possible.

Your donation today powers the independent journalism that you rely on. For just $5/month, you can help sustain Marketplace so we can keep reporting on the things that matter to you.