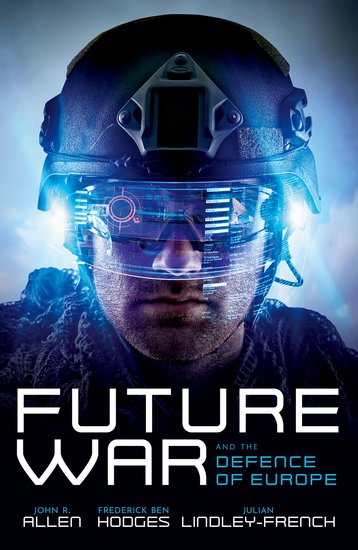 AMERICAN MILITARY DOCTRINE took a sharp turn after 1990, when the Soviet Union collapsed and with it, the hard military threat lurking behind its puppet states. It had been previously treated as a given that tank-and-trench battles, of the sort that had ravaged the middle part of the continent twice in the 20th century, would define the nonnuclear aspect of a superpower conflict, and that NATO needed to be prepared for a mechanized ground war for a march on Moscow. But by the turn of the 21st century, those legions of tanks and combat engineers looked like an anachronism — leftover props from a movie.

Not so fast, say the authors of Future War and the Defence of Europe. The geopolitics have changed considerably, but the means of potential warfare in Europe might resemble a strategy that Kaiser Wilhelm II would still recognize.

Retired United States generals John R. Allen and Frederick Ben Hodges join with Julian Lindley-French of the National Defense University to play out two plausible war game scenarios that center on old-fashioned heavy battlefield maneuvers with a technological twist instead of “surgical” air strikes or the special forces–led counterinsurgencies of the last 20 years.

In the first simulation, Chinese and Russian high-tech capabilities outmatch the overstretched Americans. United States Army columns are destroyed on the ground in Europe, while the Navy loses in the South China Sea and refugees from North Africa flee to Europe amid a human-engineered COVID-29 pandemic. This is the epitome of what the authors term “hyperwar.”

The authors offer a more optimistic hyperwar story in the second simulation. American and European integrated defenses effectively parry a Russian attack, China does not back the unsuccessful Russians, and the lessons learned from COVID-19 mitigate against the worst effects of the bioengineered COVID-29.

Allen, Hodges, and Lindley-French are aiming their recommendations not at the Pentagon but at the European political classes who “no longer believe war is possible.” But contemporary war won’t look like The Longest Day. Instead, it will take the form of “5D warfare”: “disinformation, deception, destabilization, disruption, and destruction.” Another factor might be disease of the engineered sort or a debt crisis in which China will hold the notes and demand punishing repayments from its rivals.

The authors worry that Europeans see defense “as what can be afforded after the costs of social welfare have been expended,” rather than as an imperative. This despite a strategic reality: “[S]hould the Russians launch a determined military attack on Europe’s eastern flank so long as their objectives were limited to their own vicinity, it is hard to believe they would not succeed.”

From the so-called Islamic State and Syria to Libya and Iran, “there is little or no political desire in Europe to consider the bigger strategic picture,” especially in securing access to Middle Eastern oil. The failure to engage in rebuilding Libya — so central to a current and future flood of refugees — signals a worrisome retreat from the responsibilities of holding a regional sphere of influence. These are much more European problems than American ones, yet Europe does not do its share to manage them.

The authors warn against the debt-trap diplomacy of China’s Belt and Road Initiative, now making inroads in Europe through investment in European infrastructure. “The danger is that in a crisis certain EU and NATO members would be ‘persuaded’ by Beijing to withhold their support for the Americans and thus, in effect, paralyse the Alliance.”

American readers worn down by Donald Trump’s rhetoric against our NATO allies and his demands that they “pay up” might ask why the United States should continue to subsidize European security when Europe will seemingly not pay its fair share. The authors acknowledge “the American commitment to Europe is taken too much for granted by too many Europeans, even if they regularly complain about US policy and strategy on issues that they themselves lack the power to influence.” Russia will continue its efforts to drive a wedge into the Atlantic and sever the alliance, capitalizing on the United States’s nascent isolationism and Europe’s strategic apathy.

The recalcitrance comes even as rotting breastworks on the eastern front make it plain that Europe is “woefully ill-prepared and ill-equipped to face a major Russian attack.” Nations will collapse as fast as the Maginot Line of 1940 if Europe does not significantly invest in the technology required of hyperwar.

The policy recommendations are not neatly distilled. One must pick out the hidden gems. The authors suggest forming a transnational bank that “could parry, blunt, or block the attractiveness of Chinese strategic investments designed to ‘cherry-pick’ Europe’s best tech companies.” Because the Cold War peace is over, Europeans must find a coherent grand strategy and spend far more on their security and defense needs.

Allen, Hodges, and Lindley-French hope the COVID-19 pandemic is a wake-up call to Europe that it is unprepared for the threats of the future, state-based or otherwise. Only through focused investment in defense spending do the Europeans stand a chance of keeping the continent together from the many external threats they face. If they do not help themselves, the likelihood of the United States staying engaged wanes, and we risk a return to the fractured isolationism of the 1930s.

Brian Babcock-Lumish is the director of the General David H. Petraeus Center for Emerging Leaders at the Institute for the Study of War. A scholar of civil-military relations and alliance politics, he is an adjunct associate professor of strategic studies at Georgetown University, a nonresident fellow of the Modern War Institute at West Point, and a security fellow of the Truman National Security Project.