With help from Bjarke Smith-Meyer

PROGRAMMING NOTE: Morning Tech will not publish on Monday, Oct. 11. We’ll be back on our normal schedule on Tuesday, Oct. 12.

Editor’s Note: Morning Tech is a free version of POLITICO Pro Technology’s morning newsletter, which is delivered to our subscribers each morning at 6 a.m. The POLITICO Pro platform combines the news you need with tools you can use to take action on the day’s biggest stories. Act on the news with POLITICO Pro.

— TTYL: A number of Democratic tech and telecom policy staffers are trading their Hill offices for industry gigs. That’s got people worried about Congress’ ability to take on the powerful industries.

— Airwaves battle: Amid Congress’ broadband push, industry players continue to fight over whether the FCC should open up 12 GHz airwaves for 5G use.

IT’S FRIDAY, OCT. 8. WELCOME TO MORNING TECH. I’m your host, Benjamin Din. Are you a student interested in journalism? Consider applying to the POLITICO Journalism Institute. Applications are open through Nov. 30.

Got a news tip? Email me at [email protected] and find me on Twitter @benjamindin. Got an event for our calendar? Send details to [email protected]. Anything else? Team info below. And don’t forget: Add @MorningTech and @PoliticoPro on Twitter.

More data flows between the U.S. and EU than anywhere else in the world. These flows underpin the global financial system, advance life-saving medical research, enable cybersecurity cooperation, and make cross-border commerce possible. And that’s why we need a new U.S.-EU Privacy Shield agreement that brings legal certainty to data transfer mechanisms. Too much is at stake for businesses, customers, and workers on both sides of the Atlantic. It’s time to finalize a transatlantic agreement.

BRAIN DRAIN ON THE HILL — Democratic aides have been fleeing the Hill for lobbying gigs with major tech and telecom companies — just as lawmakers are preparing to tighten regulations on those same companies, Emily and John report for Pros this morning.

More than a dozen senior Democratic tech and telecom policy staffers have left the Hill this year, many of them heading to the likes of Facebook, Apple, Verizon and Charter Communications. Others have left for Biden administration posts. They’re taking with them specialized knowledge on issues like artificial intelligence, data privacy and broadband.

“There has always been a dearth of people that understand technology and its interaction with society in Congress — at the member level, at the staff level,” said former Rep. Will Hurd (R-Texas), who led efforts to regulate AI and worked on other tech-related issues during his time in Congress. “So the departure of anyone who has that kind of experience and expertise makes this problem even more acute.”

— Behind the departures: There’s a mix of factors at play in why so many are headed out the door. One is the significant pay disparity between Hill staffers, whose salaries typically range from $35,000 to $150,000 a year depending on their roles, and industry lobbyists, who can earn significantly more, especially in the tech and telecom sectors.

One former staffer pointed to the atmosphere on the Hill in recent months, fueled by pandemic restrictions, a deadly insurrection at their workplace and the bitter partisan fights playing out in Congress. Plus, Democrats are currently in control of the White House, the House and the Senate, making longtime staffers with Democratic ties particularly attractive hires.

— That’s just the way it goes: But some say that the turnover is normal for Congress, and that there are always capable individuals who can fill vacant positions on the Hill. “People come and go, and the place doesn’t fall apart,” said Rep. Mike Doyle (D-Pa.), who chairs the House Energy and Commerce telecom subcommittee. “It’s amazing, isn’t it?”

WELCOME TO CORPORATE TAX DAY — Policymakers from around the world will convene today to put the finishing technical touches on an international overhaul of corporate taxation brokered by the Organization for Economic Cooperation and Development that would significantly affect the world’s largest companies.

Should an agreement be reached, as expected, finance ministers from G-20 countries will likely rubber stamp the deal when they gather in Washington next week. National leaders would then endorse it at the end of the month, kickstarting an implementation period that aims to have the whole package in force by 2023.

— What’s in the plan? The overall accord is composed of two pillars. The first is a levy on the world’s 100 largest companies, which would have to pay taxes in all jurisdictions where they have operations. A complicated formula would dictate how companies parcel the money around the world, depending on operations and sales. The second pillar would introduce a minimum corporate tax rate of 15 percent for companies that have an annual revenue of at least €750 million (about $866 million).

— What’s going on in Europe? All eyes have been on the European Commission, since three of its members — Estonia, Ireland and Hungary — refused to sign on to the minimum tax in July, amid concerns that it might put companies off from setting up shop within their borders. That set off alarm bells in Brussels, as the EU’s tax initiatives require unanimous support. Estonia and Ireland announced Thursday that they’d join the tax bandwagon, after being reassured that they could apply lower rates to companies under the revenue threshold.

— What about Congress? Top Republicans in the congressional committees tasked with writing tax policy have complained about being left out of negotiations by the Biden administration. “That will cause problems for them when they bring these agreements back to Congress for approval, as they must,” House Ways and Means ranking member Kevin Brady (R-Texas) told reporters. Senate Banking ranking member Pat Toomey (R-Pa.) said at a hearing last month that Senate approval for the deal was “unlikely.”

SAYING GOODBYE — Today marks FTC Commissioner Rohit Chopra’s last day at the agency. He’ll be sworn in to his Senate-confirmed position as director of the Consumer Financial Protection Bureau on Tuesday after the federal holiday, leaving the FTC in a 2-2 partisan deadlock. That will certainly make life harder for Chair Lina Khan, who will be left without a Democratic majority until the Senate confirms privacy hawk Alvaro Bedoya to the position. 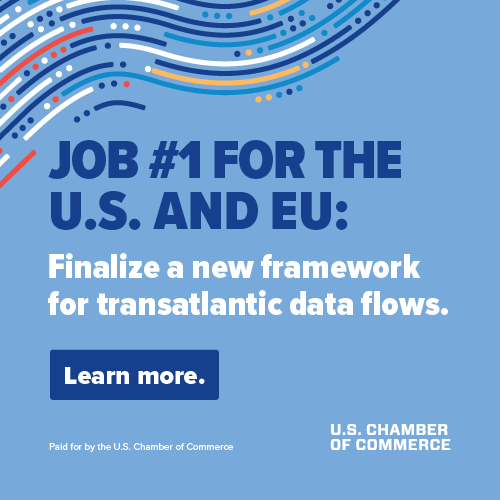 FIGHT TO OPEN UP 12 GHZ HEATS UP — The push to allow the 12 GHz band of spectrum to be used for 5G is taking on new significance, as broader infrastructure spending talks continue and SpaceX’s Starlink satellite broadband service prepares for a nationwide rollout.

— What the advocates are saying: The 5G for 12 GHz Coalition, which represents more than 30 telecom companies, trade groups and public interest groups that want to open up the 12 GHz satellite airwaves for two-way 5G connections, told the FCC on Thursday that it should move forward with a rulemaking to expand access to the band. It says this would “match that commitment to next-generation broadband infrastructure” in Congress, as lawmakers weigh devoting $65 billion for broadband initiatives to boost connectivity nationwide.

“The FCC can take action now — without waiting on the legislative process — to open up 500 megahertz of contiguous spectrum ideal for accelerating the 5G mobile and wireless networks, improving opportunistic access to spectrum, and strengthening the capacity of Wi-Fi and other unlicensed services,” the coalition wrote in its filing.

— On the other side: One of the main opponents of the push is SpaceX, which already uses this band of spectrum for Starlink. CEO Elon Musk also dropped some news about Starlink on Thursday, tweeting that there should be a “nationwide rollout by end of month.”

The company has argued that its investments to deploy Starlink satellites would be “undermined” by the FCC going forward with an “open-ended rulemaking” on expanding the use of those airwaves. Musk even lobbied former FCC Chair Ajit Pai on the issue, and the opposing sides have feuded publicly over the issue, trading shots via FCC filings.

— What’s next? The FCC has not made any announcements on how it plans to proceed, and it’s not clear whether the agency will take action until it gets a permanent chair. (Acting Chair Jessica Rosenworcel will leave the commission by January, unless she is renominated and confirmed to another term.)

Jennifer Huddleston is joining NetChoice as policy counsel. She was most recently director of technology and innovation policy at the American Action Forum. … Juniper Downs is now global head of community policy and partnerships at Airbnb. She most recently was global director of public affairs for government affairs and public policy at Google and is also a YouTube alum. … Dagan Kasavana and Len Forkas are joining the board of directors of the Wireless Infrastructure Association. … Clé Diggins is now a digital services expert at the U.S. Digital Service. He most recently was director of product and technology at Get Us PPE.

The FCC is making more than $163 million available for broadband deployments through the Rural Digital Opportunity Fund and “is also continuing its work to refocus the program to ensure that funding goes to unserved areas that need broadband.”

Banned for life: Louis Barclay created a tool for Facebook users to unfollow their friends, groups and pages, rendering the News Feed obsolete. Then the company kicked him out, he writes in Slate.

What’s up: When the Facebook outage occurred, it also took down WhatsApp, a communications lifeline in the “Global South.” Gizmodo looks at how things became that way.

Mission accomplished: “U.S. Set Out to Hobble China’s Huawei, and So It Has,” WSJ reports.

That was fast: Claire Foy from Netflix’s “The Crown” is set to play Sheryl Sandberg in “Doomsday Machine,” a TV adaptation of “An Ugly Truth,” THR reports.

Right to repair: “Bowing to investors, Microsoft will make its devices easier to fix,” Grist reports.

Taking action: Snapchat is cracking down on drug dealers on the platform, NBC News reports. The move follows the outlet’s profile of eight parents whose children died after taking counterfeit pills bought on Snapchat.

Tell us why: House lawmakers are calling on Google and Apple to explain their decisions to remove an app published by Russian opposition leaders during the recent election in Russia, following accusations that it was due to Kremlin pressure.

Data Transfers are Foundational to the U.S.-EU Economic Partnership: More data flows between the U.S. and EU than anywhere else—a relationship valued at over $7 trillion.

Data Flows Give Small Businesses Opportunity: Over 70% of the companies registered under the U.S.-EU Privacy Shield were SMEs.

Data Flows Open New Markets: Providing businesses access to over 300 million consumers in the U.S. and nearly 450 million in the EU.

The U.S. and EU must work together to finalize a framework that brings legal certainty to data transfers. Too much is at stake for businesses, customers, and workers on both sides of the Atlantic.

HAVE A RELAXING WEEKEND!