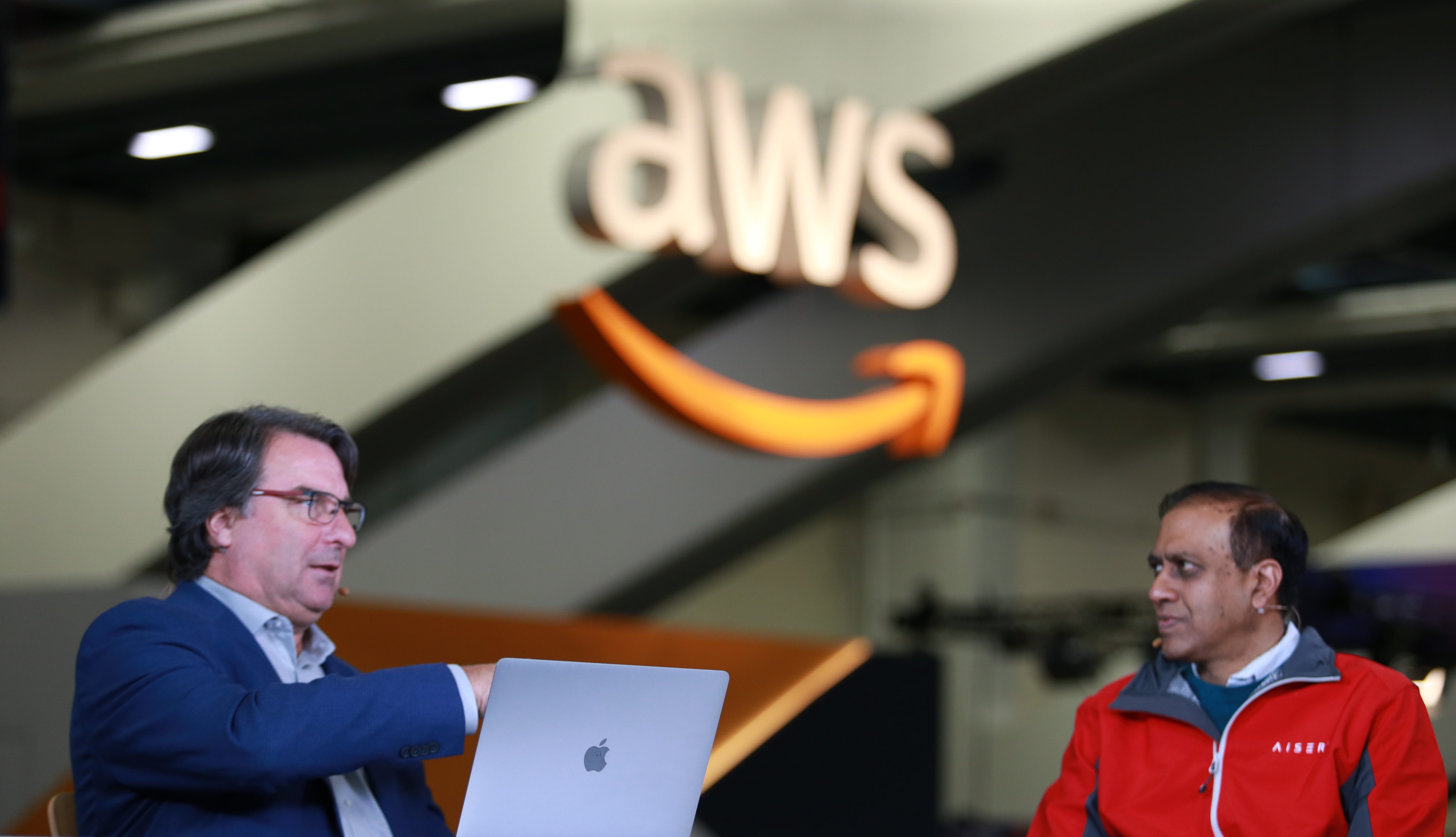 A good place to look is in the partner ecosystem of Amazon Web Services Inc., according to Serge Shevchenko, global startup partner development manager at AWS. The cloud giant maintains relationships with over 100,000 partner companies in more than 150 countries across the globe through its AWS Partner Network.

“We help these partners focus on what we truly need to build by working backward from customer feedback. Often startups try to boil the ocean with many different use cases, and we help them laser focus on what they are really good at and how to bring that to the customer as quickly as possible,” Shevchenko said.

AWS Summits are held regularly across the globe, providing the partner community an opportunity to meet in person to share experiences and discover the latest news from AWS. The San Francisco Summit is one of the largest, and theCUBE’s analysts were on the ground in April talking tech trends with leaders and experts from AWS and its ecosystem partners.

In case you missed our live coverage, here are theCUBE’s top three takeaways from the AWS Summit San Francisco event:

1) Get ready for an AI-native world.

Cloud computing has taken technology to a level where humans are no longer able to manage the complexity and speed required. But artificial intelligence can. From real-time data analysis that gives businesses the answers they need to survive in a digital economy to low-code and no-code tools that close the software developer skills gap, AI has become an essential element of business solutions.

The next step will be the creation of a “system of intelligence” that will make intelligent software as ubiquitous as cloud-native software has become, according to Muddu Sudhakar (pictured), chief executive officer of AI service management platform provider Aisera Inc.

“AI-native is a new buzzword,” he told theCUBE during the Summit, predicting a future where AI is built into everything. “AI for customer service … applying AIOps for good old IT operation management, cloud management …  applying AI with workflow automation. You’ll see AI going off,” he said.

By extension, this applies to automation, which relies on AI to accomplish tasks that are too complex (or too boring) for humans.

“You’ll see all the SaaS companies, cloud companies having automation as a core. So it’s like how you have a database and compute and sales and networking. You’ll also have automation as a layer embedded inside every stack,” Sudhaker added.

Rafay Systems Inc. has already implemented an automation layer in its shared service platform that abstracts the complications of managing Kubernetes. In an interview with theCUBE during the Summit, co-founder and Chief Executive Officer Haseeb Budhani explained the wider implications of the concept.

“The key here is repeatably usable automation. It’s automation that it can use again and again and it’s flexible enough that it solves for many companies’ problems,” he said. “Whether we have a financial services customer, or an insurance company, or a healthcare company, or a high tech company, you know what, their problems are exactly the same.”

AWS is an AI advocate, not only with its portfolio of intelligent services, but also by encouraging developers to use AI with training tools, such as its DeepRacer autonomous vehicle.

AI is essential for low-code/no-code tools such as AWS Honeycode, which eliminates the skills gap by enabling citizen developers to create custom applications. Startup Zeet Inc. is taking the abstraction a step further, automating the DevOps task of deploying and managing code and applications on AWS, GCP, Azure and other clouds.

“The coolest thing is we’re seeing the next layer of those abstraction tools,” Johnny Dallas, founder and chief executive officer, told theCUBE during the event. “What we’re doing with Zeet is … we’re building an app platform that deploys onto your cloud.”

2) Chaotic cloud can cause costs to soar – could supercloud be the answer?

The pay-as-you-go model of cloud reduces companies’ upfront capex costs, but it can cause operational expenses to rise as engineers overprovision cloud resources to avoid downtime. The problem is caused, in part, by the inability to effectively manage containers, with tracking what is where and when almost impossible in a dynamic and obscure Kubernetes environment. This is hard with one public cloud provider, but it becomes even harder as companies hedge their bets by using multiple cloud providers, ending up with unplanned, and unconnected, multicloud.

Summing up the state of multicloud today, Corey Quinn, chief cloud economist at The Duckbill Group told theCUBE, “Multicloud exists in a variety of forms; some brilliant, some brain dead. It depends a lot on context.”

The solution to “kill that complexity of multicloud” is to build another level of abstraction on top of infrastructure provided by the cloud provider, according to Sarbjeet Johal, principal adviser at Stackpane, as he wrapped up the Summit in a conversation with Furrier. This matches what theCUBE is calling supercloud.

The same concept was discussed this week at Dell Technologies World, when Chuck Whitten, co-chief operating officer of Dell, proposed the solution to chaotic multicloud strategies could be the creation of “an interconnected tissue” that enables the clouds to work together as a single platform.

Supercloud doesn’t have to be multicloud, according to Furrier, who defines the concept as an abstracted layer built on top of a public cloud provider that leverages its capex and creates differentiated value. It’s having “your own cloud without all the capex,” he stated.

3) AWS continues to add to its serverless portfolio.

AWS raised the bar on its serverless services with the release of serverless Redshift, EMR, Kinesis and MSK versions during re:Invent 2021. AWS Summit San Francisco saw the portfolio continue to grow with the long-awaited general release of Amazon Aurora Serverless v2 and SageMaker Serverless Inference.

“We wanted customers of all sizes to experience the benefits of serverless,” said Swami Sivasubramanian, AWS vice president for database, analytics, and machine learning, during his keynote at the event.

This trend to build serverless-first applications is part of the greater movement toward freeing the developers to create cloud-native applications that create value for the company rather than maintaining infrastructure. Like other as-a-service models, it allows freedom to scale as needed and reduces CapEx costs.

“[Serverless] dramatically reduces the skill required to run these workloads of any scale. And it dramatically reduces the undifferentiated heavy lifting because you get to focus more of the time that you would have spent on the operations on the actual work that you want to get done,” Dr. Matt Wood, vice president of analytics, business intelligence and machine learning at AWS, told theCUBE in an interview during AWS Summit San Francisco.

AWS isn’t the only company offering serverless versions of its services. Ian Massingham, vice president of developer relations and community at MongoDB Inc., spoke to theCUBE about Mongo’s serverless database that is currently available in preview.

“You provision on end-point, and that will scale elastically in accordance with your usage and you get billed by consumption units,” he said, explaining how MongoDB Atlas serverless is modeled after AWS’ serverless paradigm.

Commenting on the evolution of evolving cloud technology, Johal underscored how the accessibility of technology has grown exponentially in the past two decades.

“It is all enabled through cloud,” he said. “Once you have access to the cloud, all you need is connection to the internet; after that, you have the virtual machines, and you have the serverless [services]. There’s zero cost to you.”

(* Disclosure: TheCUBE is a paid media partner for the AWS Summit San Francisco event. Neither Amazon Web Services Inc., the sponsor for theCUBE’s event coverage, nor other sponsors have editorial control over content on theCUBE or SiliconANGLE.)