On July 31, 1971, Apollo 15 astronauts James B. Irwin and Commander David Scott first used the Lunar Roving Vehicle to explore the moon’s surface. The LRV was designed to operate in low gravity, making it easier for the astronauts to maneuver.

Apollo 15 was the fourth US space mission to land on the moon. The mission didn’t last long—it began on July 26 and ended on Aug. 7. The actual lunar surface exploration took just a few days, from July 30 to Aug. 2. And Scott and Irwin spent less than a day on the moon’s surface—just 18 hours and 37 minutes. 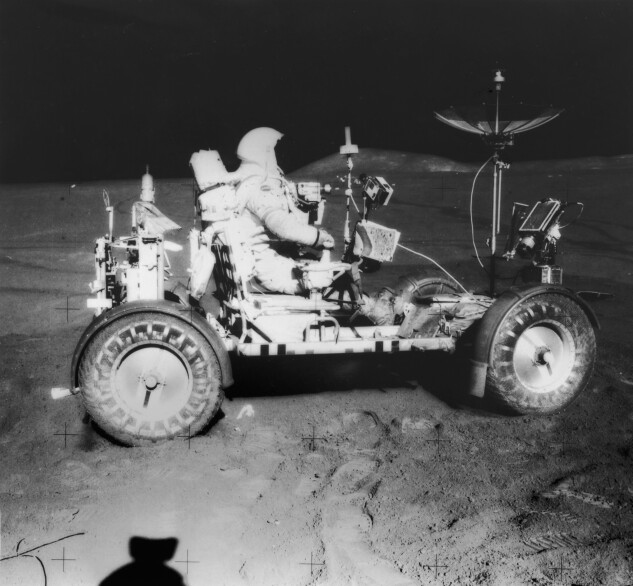 US astronaut, Commander of Apollo 15, David Scott seated in the Lunar Rover after completion of extravehicular activity (EVA) is returning to the lunar module ‘Falcon’ with samples of rocks and soil.

The Apollo missions were before my time. But I still appreciate their goals—including achieving preeminence in space for the US—and what it meant to the country. Our collective fascination with space was in full swing by the time I was a kid; I remember having a glow-in-the-dark poster of the solar system in my room. I thought for a bit that I might become an astronaut.

Clearly, I didn’t make it into a spacesuit. It turns out that tax law was more my thing. But I’ve remained fascinated by space exploration and was super excited last year when Chris Sembroski became the second graduate from my high school to reach space—Christina Hammock Koch was the first.

It’s always fun to be the first to do something new or look at something in a different way. I think that’s true in any profession. It’s something we shoot for in the tax world; how often have you studied a problem, determined to figure out a better answer for your client? And part of getting to the next level—or atmosphere—is relying on the information and tools available to you, like our great commentary and insightful analysis on federal, state, and international tax issues.

Buzz Aldrin has said that all of us have a moon, a dream, that we can strive for. Even if you don’t attain it, he says, you can at least reach for it. Our goal is to help you reach yours. 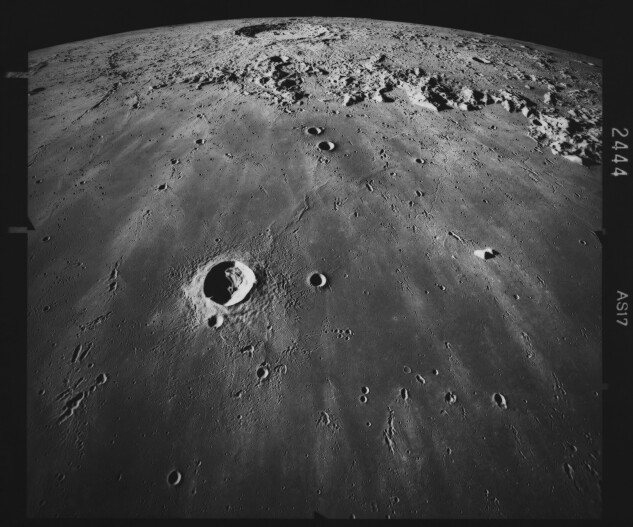 Image of the lunar surface, looking south across Mare Imbrium, with the crater Copernicus (58 miles in diameter) visible in the distance, taken during the Apollo 17 mission, Dec. 7-19, 1972.

Earlier this year, Boston University Law School alum Kevin Brown introduced a proposal grounded in international law that would impose a tax on the physical occupation of the lunar surface—a moon tax. According to his hypothetical, a $20,000 per moon unit tax would generate how much money per year, assuming 2.5% of the moon’s surface was occupied?
Answer at the bottom.

Our experts touched on a wide range of topics, from Pillar Two to state tax developments. For a look at what’s making news, here’s our roundup.

In the wake of New York’s Obus ruling, auditors must now look beyond whether a dwelling has a bathroom, a kitchen, and a place to sleep to see whether the nature and use of the property make it sufficiently residential, says Greenberg Traurig’s Glenn Newman.

Will Morris of PwC submits that the delay in implementing the global minimum tax (Pillar Two), caused by Hungary’s ongoing opposition to the EU law enacting that measure, should be used as an opportunity to put Pillar Two back on schedule.

Philip Olsen of Davis Malm summarizes recent tax developments in Massachusetts, including an update on whether the state can tax a gain realized by a nonresident corporate taxpayer on the sale of its 50% interest in an LLC, as well as proposed regulations on retail taxes of retail marijuana sales and spousal relief from joint income tax liability.

Thierry Viu of CMS Francis Lefebvre Avocats considers the recent agreement ending the criminal proceedings against McDonald’s and the implications of the enhanced cooperation between France’s tax and prosecutorial bodies on taxpayers’ rights.

Ignacio Gepp of Puente Sur provides a view of the tax reforms set out in the bill recently submitted to Congress by the new president, which, if approved, would change the tax landscape in Chile dramatically.

Rather unexpectedly, the 117th Congress is shaping up to be one of the most productive in recent memory. A new compromise reached by Senator Joe Manchin and Senate Majority Leader Chuck Schumer could prove to be its most significant achievement yet, say Bloomberg Opinion Editors.

In a Bloomberg Editorial Jonathan Bernstein writes that while there’s no guarantee the compromise will pass, the trimmed-back version of President Joe Biden’s health, tax, climate, and energy initiative is closer to becoming law than ever, with a chance for more agreements before the end of the year.

According to Kathryn Kaminsky of PricewaterhouseCoopers, determining how and where people work can have long-lasting impacts on a company and its culture, and it’s critical that business leaders take it seriously.

The Multistate Tax Commission has undertaken an ambitious project on the state taxation of partnerships. The result to date is a proposed model act. Bradley Arant Boult Cummings LLP’s Bruce P. Ely and Dinsmore & Shohl LLP’s Kelvin M. Lawrence look at the draft model and discuss three major issues that should be addressed moving forward. 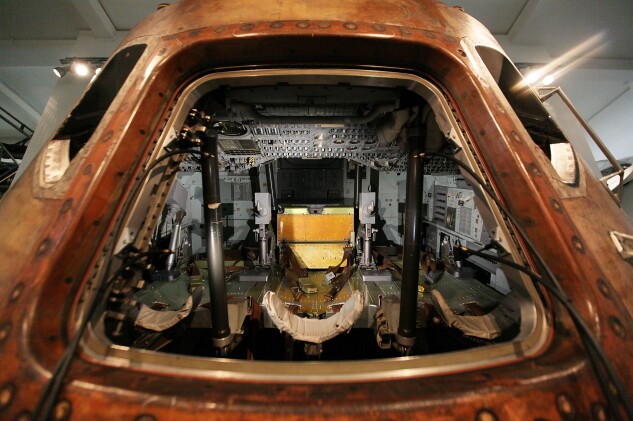 A view inside the Apollo 10 command module on May 23, 2009 in London, England. The space capsule was flown around the moon in 1969 ahead of the Moon landing by Apollo 11.

Proper estate and succession planning is key to Middle East families’ long-term financial security. However, care must be taken to navigate this relatively new world, Esquire Group’s Jimmy Sexton says in this edition of “A Closer Look.”

Tax agencies have a variety of ways of encouraging tax compliance, including publishing taxpayer delinquency lists and filing liens. The rules—and your options—can vary between states and IRS. This week, I tackled what you need to know, including how to avoid notoriety.

Last week, Katelyn McClure was sentenced to prison her for role in a GoFundMe scam. The scam startled donors, and the saga is a good reminder that you should take care before handing over your hard-earned cash, even if it’s for a great cause. In this week’s bonus column, I caught readers up on the associated court case and offered a few tips to consider before making a donation.

The US ranks first globally for financial secrecy, according to the latest report by the Tax Justice Network, and US authorities are trying to do something about it. A few states are taking the problem seriously, including New York, which debated but failed to enact the LLC Transparency Act earlier this year. In this episode of Talking Tax, Bloomberg Tax senior correspondent Michael Bologna speaks with Ryan Gurule, policy director of the Financial Accountability and Corporate Transparency Coalition, and Elizabeth “Beth” Garvey, a shareholder in the government policy practice of Greenberg Traurig LLP, about the proposal.

Our Spotlight series highlights the careers and lives of tax professionals across the globe. This week’s focus is on George Koutouras, a transactional tax professional with global consulting firm Berkeley Research Group. 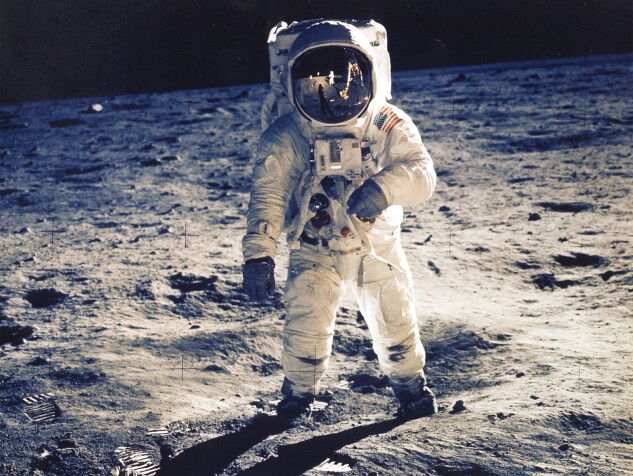 Daniel Borchert has been promoted to tax partner in the Denver office of Michael Best & Friedrich LLP, the firm announced.

Lisa Carley and Ryan Deming have been promoted to partner in audit services at Crowe LLP in Hartford, Conn., the Connecticut Society of CPAs said.

Erik Jensen has joined Polsinelli as a shareholder in the Denver office as part of the tax practice, the firm announced.

Registration is open for the first-ever LEARN event hosted by the National Association of Enrolled Agents.

If you have an industry-wide event, let us know. You can email your submission to TaxEvents@bloombergindustry.com for consideration.

According to the hypothetical, if the tax were $20,000 per moon unit and 2.5% of the moon’s surface were occupied (about twice the footprint of California), the tax would generate $18 billion each year.