There are more than 35,000 works of art in the Musée du Louvre, but none is more recognizable than the “Mona Lisa.” 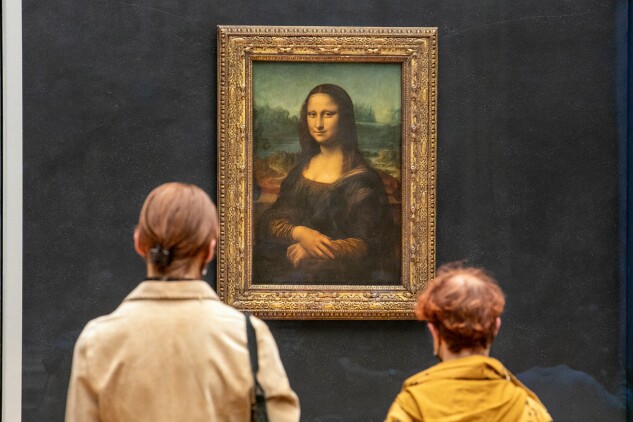 Visitors at the Louvre examining the The Mona Lisa, or “La Joconde,” by Italian artist Leonardo Da Vinci.

That hasn’t always been the case.

On Aug. 21, 1911, a thief removed the small painting—it’s just 30 inches by 21 inches—from the wall, wrapped it in his clothing, and walked out of the door. The museum was closed that day since it was a Monday. Workers at the Louvre wouldn’t notice its disappearance until the next day.

The thief, Vincenzo Peruggia, was a handyman who had worked for the Louvre. He had hidden in a closet overnight and exited the building with ease—a plumber reportedly helped him open the front door as he left with the painting.

The painting was created by Leonardo da Vinci in 1507 but had not attracted much attention beyond the art world cognoscenti. But after it went missing, the story blew up, and crowds flocked to the museum.

Ironically, the increased interest made it less likely that the museum would get the painting back quickly. Peruggia had hoped to sell the painting, but the attention made it too difficult. Instead, he hid the “Mona Lisa” in his apartment. It remained there for so long that he built a box with a false bottom to conceal it fully. What’s now recognized as one of the most famous paintings in the world would remain hidden for more than two years.

Eventually, Peruggia tried to offload it. By then, it was so famous that he shouldn’t have been surprised to find the police at his door. 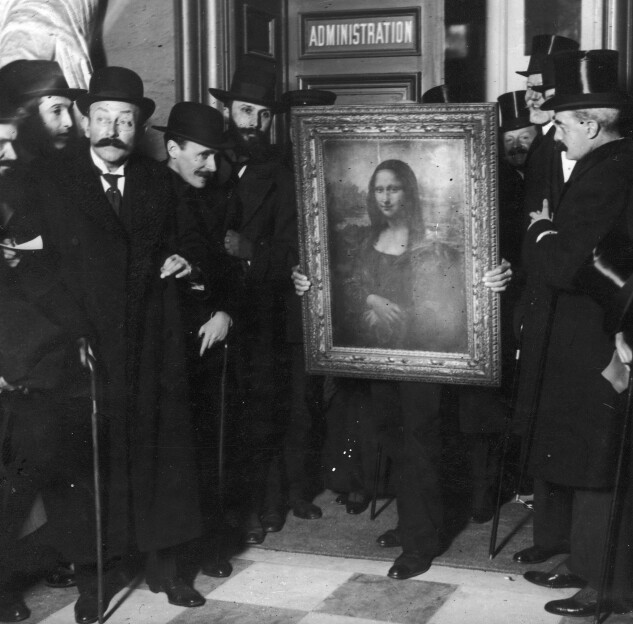 Officials gather around the Mona Lisa on its return in January 1914.

The “Mona Lisa” was recovered and eventually returned to the Louvre—but not before it was paraded throughout Europe, including stops in Rome and Milan. The whole world was watching as the painting came back home in 1914. The painting, which was once overlooked, is now one of the world’s most famous pieces of art.

Like many others, I’m fascinated by this story. Even after all of these years, it’s a cautionary tale about whether we pay attention to the right things at the right time. It’s something that I’ve been thinking a lot about in light of stories hitting the media—how the frenzy can overshadow the thing itself.

There’s value in focusing on what could be important and paying attention to details. But sometimes, it’s hard to figure out how that might look. Fortunately, at Bloomberg Tax, our experts offer great commentary and insightful analysis on federal, state, and international tax issues to help you drill down on what matters—when it comes to tax, we don’t ever want you to find yourself at a loss.

In 2017, art historian Martin Kemp wrote in his book, “Mona Lisa: The People and the Painting,” that he had discovered more information about Leonardo da Vinci’s birth. Among other things, he disputed the spot where da Vinci was said to be born, believing it to be in Vinci rather than in Anchiano. Where did he find evidence to support his theories?
Answer at the bottom. 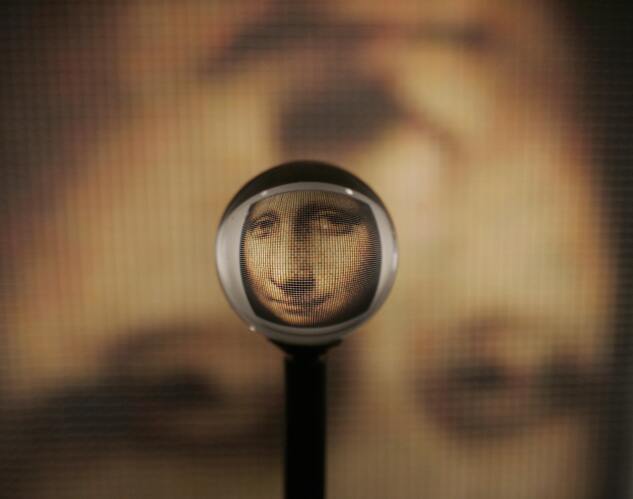 A sculpture made of 5184 spools of thread, seen through an acrylic viewing sphere titled “After the Mona Lisa 2″ by artist Devorah Sperber. From a 2007 display at the Brooklyn Museum.

Washington is the only state so far that has provided specific guidance on the taxability of non-fungible tokens for sales tax purposes. As other states develop guidance, NFT sellers should address state sales tax liability early in the process rather than later during a sales tax audit, says Marcum LLP’s John Bonk.

Sales tax audits determine if a retailer engaged in California has collected and paid the correct amount of sales tax owed to the state for all taxable transactions. California attorney and CPA David Klasing looks at what triggers a sales tax audit and how it can turn into a criminal audit.

As parents get ready to send their kids back to school, it’s the perfect time for tax professionals to advise their clients on ways they can help their children save money on taxes, says New York-based CPA Kelly Rohrs.

The Inflation Reduction Act offers a host of new fiscal measures—mostly tax cuts—to help combat climate change. Thornton Matheson of the Urban-Brookings Tax Policy Center breaks down what gets incentivized in the legislation and its impact on the environment.

Digital wallet apps such as Venmo and Apple Pay have supplanted how money changes hands, especially for younger generations. These apps have their own benefits and challenges, some with significant tax planning implications, says April’s Jody Padar.

If you’re a non-filer, what’s the best way to get back into the system and avoid possible nasty consequences like a criminal referral? Green & Sklarz’s Eric Green looks at whether it’s better to use the IRS’ voluntary disclosure program or file missing returns.

Aimée Dushime and Benita Ngozi Onyebezie examine workforce fragmentation and the rise in non-standard employment models in industrialized countries, particularly in the UK and EU, and discuss the tax and transfer pricing implications resulting from that fragmentation.

The IRS has shown it can “do more with less” by improving coordination with foreign tax enforcement agencies. The epitome of this effort—the Joint Chiefs of Global Tax Enforcement consortium, or J5—appears to have contributed to the collapse of Puerto Rico-based Euro Pacific Bank, says Miller & Chevalier’s Joseph Rillotta and Andy Howlett.

Emine Constantin of TMF considers the impact of the Covid-19 pandemic on global tax policies and how governments have reacted with different measures.

Remote work has exploded since the Covid-19 pandemic, and it’s here to stay. But companies must shore up their remote work programs to avoid tax and compliance issues in the future, says the Global Tax Network’s Brett Sipes.

In “Optimizing Your VAT When Selling B2C in the EU,” Aiki Kuldkepp of Grant Thornton examined the most important indirect tax planning aspects of business-to-consumer selling in the bloc. She now considers the value-added tax and customs duty compliance obligations faced by business-to-business traders operating in the EU.

In this special commentary, the OECD’s Pascal Saint-Amans, Achim Pross, and John Peterson offer their views on how to face the challenges of the Pillar Two global minimum tax.

More than half of the Inflation Reduction Act’s $80 billion in new IRS funding would go toward enforcement activities rather than toward technology enhancements. Amy Pitter of the Massachusetts Society of CPAs shares why there should be a heavier focus on technology, customer service, and payment processing.

Temporary holidays on state sales taxes fail to offer the meaningful tax relief that struggling families need, and they undermine funding for education, infrastructure, and other public services, says Marco Guzman of the Institute on Taxation and Economic Policy.

Proper estate and succession planning is key to Middle East families’ long-term financial security. But care must be taken to navigate this relatively new world, Esquire Group’s Jimmy Sexton says in this edition of “A Closer Look.”

Is the IRS raising an army? Are armed IRS agents heading your way? Like all rumors, these started with a grain of truth. This week, I tackled what you need to know about IRS funding, criminal investigations, and who, exactly, will be carrying a gun.

Our Spotlight series highlights the careers and lives of tax professionals across the globe. This week’s Spotlight is on Lauren A. Collins, a partner at Vinson & Elkins LLP in Los Angeles.

Eisner Advisory Group LLC has added Daniel Krauss, Lindsey Layman, and Ling You as partners in the San Francisco office, as well as Allyson Milbrod as a partner in the Iselin, N.J. office, the firm announced.

Daniel Sawyer has joined Morris James as an associate attorney in the tax, estates, and business practice.

Michael Ding has joined WeirFoulds as an associate in the private equity and tax law practice groups.

Caroline Cao has joined Lewis Brisbois as a partner in its corporate, Chinese business, and litigation as well as real estate and land use practices in Sacramento and San Francisco.

Lance Aligo has been promoted to partner at KRS CPAs, based in Paramus, N.J., the firm announced.

Robert Russell has joined Rutan & Tucker LLP as a senior counsel in the corporate group, the firm announced.

Registration is open for the first ever LEARN event hosted by the National Association of Enrolled Agents.

Registration has now opened for the first virtual 2022 Fall Tax Exempt Organizations Symposium, which will be held Sept. 8, the American Bar Association announced.

If you have an industry-wide event, let us know. You can email your submission to TaxEvents@bloombergindustry.com for consideration.

Much of the new evidence about da Vinci’s birthplace that Kemp relied on was found in property taxation returns.

Kemp said about the information that, “Tuscany set up a very early system of wealth tax and rates on the value of a property. So this is an absolutely fantastic record because everyone had to submit returns.”

Sign up for your free copy of our newsletter delivered to your inbox each week. Just head over to The Exchange and sign up using the green “Free Newsletter Signup” box at the top—or just go directly to the newsletter sign up page.