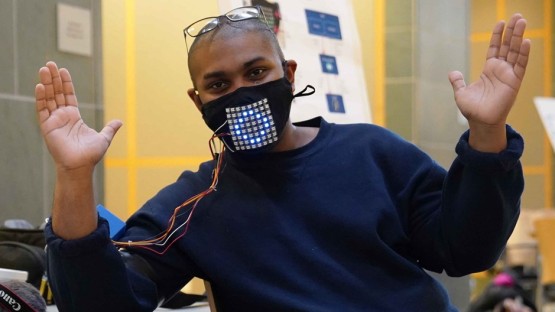 In Ubiquitous Computing, student teams draw on their education in understanding the ways technology can inform intelligent solutions to today’s challenges using practical machine learning and hardware prototyping. Twelve student-team demonstrations stationed along the Duffield atrium corridor centered mostly on wearable devices, including a wearable golf-swing analyzer, and two devices to help maneuver the social complexities of mask-wearing in the days of COVID-19.

Recognizing the inability to read facial expressions in conversations with masked friends, Christopher Chandra and Jackie Woo built “Behind the Mask,” a mask outfitted with sensors and an LED display to both read and display four facial expressions – neutral, surprise, a smile, and a frown.

Classmates Rishik Zaparde and Sunil Sabnis also used computation to address another aspect of mask-wearing: how to wear one properly and consistently. “SmartMask” is a wearable mask with four capacitive sensors to detect if it’s positioned correctly. When the mask is worn off the nose, for instance, the mask vibrates and the connecting software displays a surprised emoji. When the mask is worn correctly, the interface displays a green check and a smiley emoji.

Fall 2021 was Cheng Zhang’s first time teaching this course, and for students, INFO 4120 represents a first for them, too, the assistant professor of Information Science said.

“Many students did not have both hardware and machine-learning experience before taking this class,” Zhang said. “Students learned the full pipeline of developing a Ubicomp [ubiquitous computing] project, from designing hardware prototypes, collecting data in real-world environments, developing applied machine learning methods, to processing and analyzing the data.”

Each of the 12 student teams succeeded, he said, pointing to the “SmartMask” duo of Zaparde and Sabnis as an example.

“They creatively used capacitive sensing and machine learning learned in class to address a timely challenge in the pandemic,” he said.

Re-Designing Robots is an introductory course in human robot interaction (HRI). The intent of this semester’s projects was not to design and build a robot from scratch but to improve on existing automation right here on the Cornell campus, specifically at the Statler Hotel, said Malte Jung, an associate professor in Information Science, the Nancy H. ’62 and Philip M. ’62 Young Sesquicentennial Faculty Fellow, and INFO 4410 course instructor.

“Students spent some time this semester going to the Statler and observing automation used in the kitchen, laundry area, and room service,” Jung said. “The goal is to take existing automation and redesign it with HRI principles in mind.”

One of four class projects, FineLine was built with the Taverna Banfi, the hotel’s restaurant, in mind. Developed by Jenny Fu, Hancheng Zhang, and Nnamdi Nwagwu, Fineline is a ticket-interface design and mobile-printing system that aims to relieve some of the mental workload that comes with tracking food orders and progress.

The student team consisting of Ben Shen, Katie Go, and Will Spencer built the Beer Pong Robot, a clean assemblage of laser-cut plywood, assorted 3D-printed parts, a DC motor, and a switcher, all channeled toward the goal of a good grade, foremost, and maybe defeating the most seasoned of beer pong foes. The robot worked quite well. Fellow students were having fun with it, too, and that was most rewarding to Go.

“For the last 96 hours, we weren’t sure it’d all come together,” she said with a laugh.

“It was mostly working at 6:30 last night,” added Spencer, “and working fully about half an hour before [this demonstration].”

“The goal of the course is how to transform an idea into a physical concept that people can demonstrate to others,” said François Guimbretière, professor of Information Science and INFO 4320 course instructor. “The project doesn’t have to be perfect. What’s important is that it conveys the main principles behind the idea. The focus is on quick iteration, where you discover your mistake very quickly and move forward as you learn.”

Louis DiPietro is a writer in the Cornell Ann S. Bowers College of Computing and Information Science.