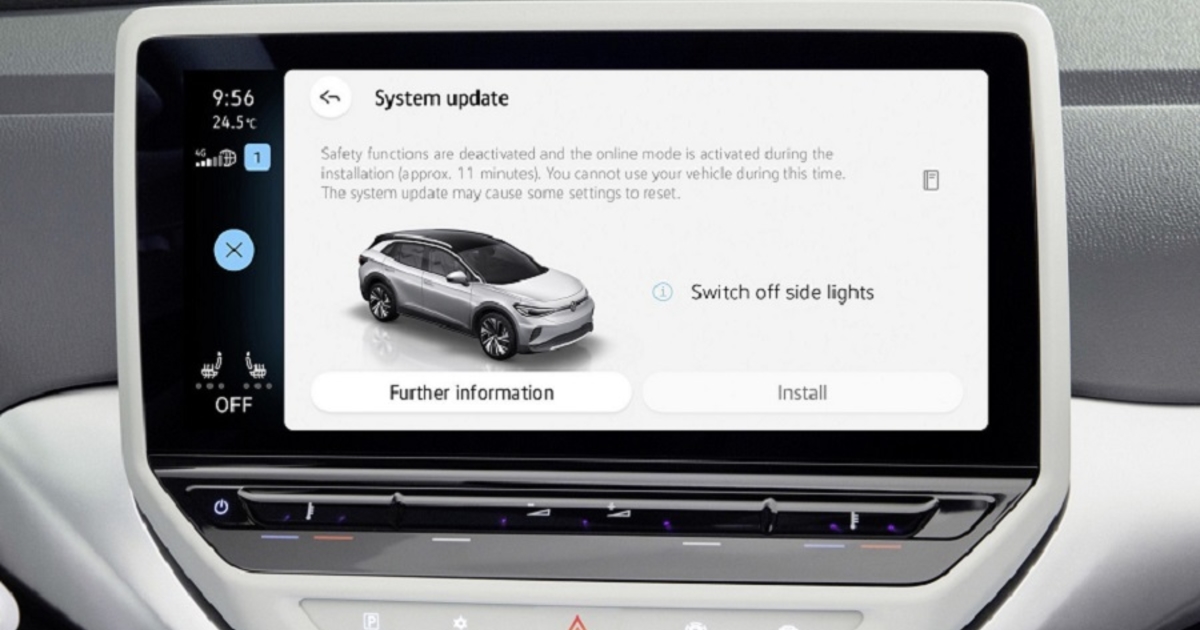 Instead, after two years of VW electric car customers angrily stabbing at screens, Diess has been forced out. Porsche boss Oliver Blume, who started as VW Group CEO on Sept. 1, is all car guy rather than software guru and got the job by being a team player and pragmatist.

VW will accelerate its transition toward electric vehicles where possible, Blume said at an internal conference on Thursday, the first day of his tenure.

Blume told top managers he had developed a ten-point plan focusing on topics including financial robustness, sustainability, the capital market, and development in China and North America.

“I am a fan of e-mobility and I stand by this path … we will keep the current pace and, where possible, increase it,” Blume said, according to a copy of his speech, highlights of which were quoted on Twitter along with a picture of Blume presenting his 10-point plan (see below).

VW must find the right rhythm for a stable transformation by defining and following through on a clear strategy, he added.

However, the probability that Blume will make dramatic changes early in his tenure is low, and that risks prolonging the software problems plaguing VW customers.

Drivers’ car displays are seizing up and even going blank. For owners to gain the ability to get over-the-air software updates of certain features — some of which may be safety-critical — VW is requiring many to drop their EV off for a day at the dealership.

Infotainment systems reliant on software described as incomplete are making their way to more models, threatening VW’s position in sales and quality rankings.

“It’s the disease that is spreading,” Jake Fisher, senior director of auto testing at Consumer Reports, said in an interview. “I am talking about systems that, when you know how to use it, now it’s multiple steps to do something that used to be one button, and that is a shame. It’s moving backward and making these cars worse.”

Fisher was one of the more than a dozen testers or owners of VW’s ID series EVs and Tesla models in seven countries whom Bloomberg spoke with to get a sense of just how big a technological gap Blume has to close.

ID drivers complained about their cars suddenly braking because of a traffic sign detection system so buggy, they tend to just deactivate it; a smartphone app that is glitchy and lacking features; and challenges syncing their phone with their EV either wirelessly or with a cord.

“I had not expected to buy a car that was unfinished,” said Christopher Bergsten, a 31-year-old in Linkoping, Sweden, who sold his ID4 SUV after less than six months. “I expected way more.”

Diess started at VW in 2015, months before the diesel-emissions scandal that rocked the company to its core. He ascended to the top job three years later as the outsider who could clean up the mess. Almost immediately, Diess cut a check for an electric-vehicle battery order that almost matched Tesla’s market value at the time.

“I really liked what Diess did,” said Barry Holleran, a 47-year-old software engineer who was one of the first in Austria to take delivery of an ID4. “He really put his neck out to make this move, and I thought as a consumer I should support that.”

Holleran said his SUV is well-engineered and a good, comfortable family vehicle — VW’s long history of building automobiles shined through. But the software? “Dreadful.” Updates are infrequent and the navigation system does not work at all.

“The saving grace is Apple CarPlay,” Holleran said. “If it did not have that, to be honest, I would get rid of the car and I would go with a Tesla.”

Early in Diess’s tenure as CEO, Tesla was in what Elon Musk memorably referred to as “production hell,” struggling to mass-produce Model 3 sedans.

For all the challenges the EV maker was having — Musk has said the company was weeks away from failing in 2018 — Diess recognized VW needed to massively expand investment in software capabilities.

One a-ha moment that year came when Consumer Reports initially denied a recommendation for the Model 3, saying it took longer to stop than the much larger Ford F-150 pickup.

Musk tweeted the next day that Tesla would maybe be able to shorten stopping distances through an over-the-air update. The following week, Consumer Reports recommended the sedan after all — braking improved by almost 20 feet.

Much as that episode turned heads across the auto industry, VW and its legacy peers have not deployed software updates nearly as frequently as Tesla.

Bert Steenbergen traded in his Skoda Kodiak for an ID4 early last year and has had two updates in the almost 20 months.

“The car was sold with a promise that every three months, there would be a software update. And that is not the case,” the 55-year-old former sales director for an energy company said. “They should be able to deliver the software, it’s not that complicated.”

Updating its vehicles every three months was part of VW’s long-term vision, said Benedikt Griffig, the automaker’s product and technology spokesman. “That was a misunderstanding when we started to announce OTA updates,” he said. “Our goal is also now with the ID family that we are bringing updates regularly to the customers. This is something we had to learn — it’s an agile process.”

Incumbent automakers including VW are having to learn to be nimbler on several fronts to respond to Tesla, shifting to battery power from the tried and true internal combustion engines and to software from hardware.

“It’s easier to master electrification, since that is a different way of converting energy and one that makes vehicles less complex,” said Jan Becker, co-founder and CEO of Apex.AI, which has developed an operating system for automakers.

“Software is a completely new area of competence that needs to be built from scratch, not the ongoing development of existing skills.”

VW stumbled right out of the gate with its ID models. A software unit that Diess started when he was head of the brand set out in late 2016 to build the operating system for the vehicles and several follow-on models derived from their modular architecture.

The initial EV of the series, the ID3, only started deliveries on time in 2020 because early buyers agreed to wait months for certain software-dependent functions to work.

During the summer of that year, VW started a group-wide operation that at the time was called Car.software.org. Within weeks, there was an abrupt personnel change: Audi CEO Markus Duesmann took charge, replacing an executive Diess had named to lead the VW group’s digital efforts. The unit was renamed Cariad in March of last year and put under Diess’s purview in December.

Taking on that responsibility proved costly. Duesmann commissioned McKinsey to give VW an in-depth assessment of where its software efforts stood, according to people familiar with the matter.

The results, reported by Manager Magazin this May, were bleak: Cariad’s decision-making structure was found to be ineffective, budgets had ballooned and delays were going to set back launches of important Porsche and Audi models.

The report contributed to the billionaire Porsche and Piech family that majority-owns VW deciding in late July to oust Diess, according to the people, who asked not to be identified discussing private deliberations.

Blume, an engineer with VW pedigree who led Porsche during the launch of its first electric car, could have some changes up his sleeve.

Whereas Diess had emphasized the need for VW to go it alone building its own software platforms for its mass-market and premium brands, Blume has been more open to working with nimble software partners that promise faster solutions. Porsche has cooperated closely with Apple, which mentioned the brand in June as being among the automakers that will integrate a new version of its CarPlay system.

“It’s normal for the build-up of a company to be an onerous process,” Blume said of Cariad in an interview VW posted to its website. “We will assess everything with an open mind and develop a swift implementation plan.”

For the time being, some 200,000 ID drivers are having to book drop-offs at dealerships for a hardware fix that will enable over-the-air updates to their infotainment and battery-management systems.

VW needs to replace the 12-volt battery that acts as a secondary power source to the lithium-ion pack underneath the vehicle. There is risk the current one does not have enough power to see through software downloads lasting several hours.

This fix is coming too late for some customers. David Staruch, a VW ID3 owner in Bratislava, Slovakia, wrote to Diess in February after his car rapidly began to brake on its own while he was attempting to overtake a slower truck. He was convinced a major accident may have happened had he not stayed calm and slammed the accelerator pedal.

Staruch no longer relies on his ID3’s driver-assistance functions. “It’s a trust that is lost, and it will be hard for them to convince me again,” he said.

Jocellyn Juanillo, a 29-year-old who recently earned her master’s in social work and has been working as a Lyft driver while she searches for a job in her field, said riders keep marking her down in satisfaction ratings because she has had to ask them to pull up a navigation app on their phone when her ID.4 screen goes blank. Once they reach the destination, she says the child locks often malfunction and trap customers in the car.

“If I could just on the spot trade it with someone and give them the keys, I would,” said Juanillo, who is talking with her dealer about a possible buyback or trade-in.

Misgivings about VW’s software lagging behind led Gao Zhao, a finance manager in Shanghai, to spurn an ID6 he has tested in favor of the Model 3 he has owned for two years. He believes the German automaker is trailing not only Tesla, but also Chinese upstarts.

“It’s just like when Nokia attempted to launch a smartphone system to compete with Apple,” Gao said. “It’s just quite awkward.”