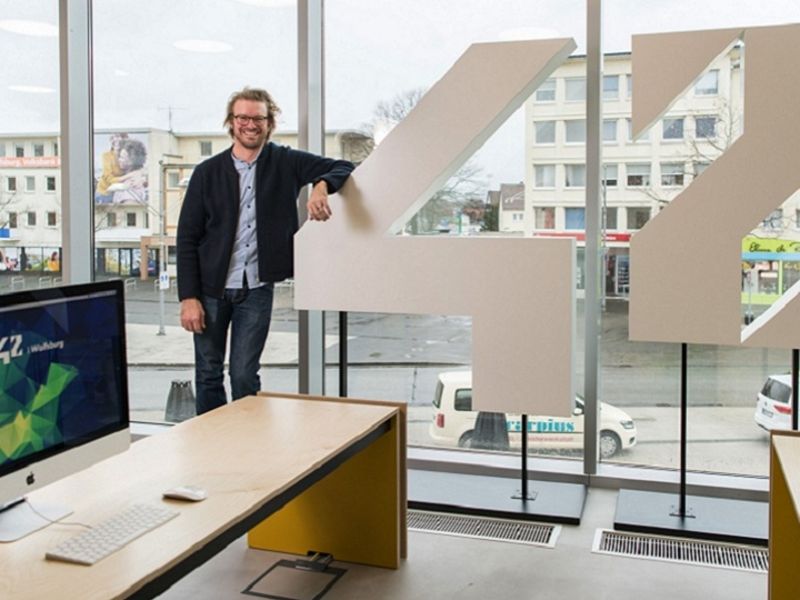 Max Senges traded the visionary buzz of Silicon Valley for an old-school German industrial center bracing for a dramatic overhaul.

As head of Volkswagen’s new coding school in Wolfsburg, the former Google researcher is a small but important part of the automaker’s massive push into software.

VW’s strategy — involving more than $30 billion in investment and multiple projects and partnerships — is critical to catch up to Tesla and counter the existential risks posed by the automotive ambitions of Apple and Alphabet.

“The car industry is changing from a focus on, ‘faster, stronger,’ to becoming more sustainable and smarter,” said Senges, who worked at Google for more than a decade. “What matters for us here is to foster a mindset” that can bridge the tech and auto worlds.

While VW is one of the largest auto producers, it’s now pitted against companies that have routinely disrupted industries, casting former leaders aside in the process. And they are coming with deep pockets and big plans to own car data — a $400 billion opportunity, according to McKinsey & Co. estimates.

VW Group’s management is keenly aware of the challenges. CEO Herbert Diess regularly cites Nokia’s fall as the world’s dominant mobile phone maker because it failed to keep up with the iPhone as a cautionary tale. He will provide an update on the company’s tech transition at events this week, including during a Power Day on Monday and at the group’s annual press conference in Wolfsburg on Tuesday.

The biggest hurdle for Volkswagen may be its firmly entrenched culture, built around seven-year automotive cycles. Line and brand managers traditionally have almost total control over what goes in their vehicles, while VW’s powerful unions weigh in on nearly every decision.

That structure helped manage more than 100 factories around the world, but it’s ill-suited for handling vast amounts of data and constantly tuning code. Initial forays have not gone well, with UBS Group determining the company is years behind Tesla from a software perspective.

The brimming confidence of top executives is not shared by everyone at the German auto giant. Some view a plan to finally start over-the-air updates this month as daunting rather than a promising milestone, according to discussions with people involved in the automaker’s operations.

The bruises from last year’s scramble to rescue a new line of software-heavy electric cars — with hundreds of specialists working in sprints — have not all healed.

Senges’s school is an agent of change in Wolfsburg. It’s located in a new building that borrows the utilitarian red brickwork of the nearby plant, but with open-floor working areas for collaboration. The facility is equipped with a virtual-reality lab and 3D printers for making prototypes. Coursework starts with 150 students in May, rising to 600 by the end of next year.

“It requires a quantum leap for automakers to close the gap to Tesla when it comes to software,” said Wolfgang Bernhart, senior partner at consultancy Roland Berger. “Just adding headcount won’t be enough.”

Already dwarfed by Tesla’s $650 billion market value, VW can ill-afford its teething problems. Its new generation of electric cars, anchored by the ID4 crossover, is going global this year.

Traditional rivals are also seeking to adapt to the digital age. Unlike VW, which poached an auto executive to run its software unit, Toyota tapped a Silicon Valley star to finalize an operating system that allows features to be installed in a car’s existing hardware over the air.

With similar transitions under way at Mercedes-Benz and BMW, the engineering backbone of Germany’s powerhouse economy is exposed. The efforts have become even more urgent after the implosion of Wirecard showed Europe’s lack of global tech champions.

VW has set a target of boosting the share of its software that is developed in-house to 60 percent from 10 percent currently. To pull this off, it established a unit — called Car.Software Org — with about 4,000 employees to develop a system that can manage vehicle data flows and connect them to the cloud.

“This would be the ‘brain’ of the car, and we don’t want to give it to other parties,” CEO Diess told Bloomberg in November. “We see that probably as the most important race and decisive point for our industry in the next five to 10 years.”

In its latest five-year investment plan, the company doubled spending on digitalization efforts to 27 billion euros ($32 billion), even as the overall budget remained flat. While that represents significant resources, Google parent Alphabet spends almost that much in a year.

Infighting has dogged VW’s effort. Car.Software was initially envisioned as an agile standalone unit, but internal rivalries got in the way, triggering the departure of high-ranking software specialists including former SAP executive Bjoern Goerke. The company then changed tack and put Audi in charge.

Meanwhile, the need for VW to step up its game has become painfully evident.

In the early days of the coronavirus crisis with parallel launches of the Golf hatchback and the ID3 full-electric compact hatchback going wrong, Diess summoned senior managers for a fresh round of war-gaming.

The Golf’s emergency-call feature had to be fixed. Other glitches delayed the ID3 for months, and the first owners had to drive to their dealerships for a software patch because over-the-air updates were not working yet.

Diess and his team concluded the efforts were proving too little, too late.

The result is Project Artemis. Under the more aggressive strategy, VW plans to build its own software stack for vehicles starting in 2024. The first Artemis car — code-named Landjet — will be assembled in a smaller factory in Hanover before the technology is scaled up two years later with a more affordable VW-branded electric car out of Wolfsburg.

Big Tech is not waiting. While VW’s Car.Software unit entered a labor pact with unions regulating salaries and working hours, Apple’s car project appears to be moving forward and Alphabet’s Waymo is widely believed to be leading the pack in self-driving technology.

The efforts could lead to software companies controlling the relationships with car users, said Anja Hendel, a former Porsche official who joined Diconium, a digital advisory acquired by VW. “It’s a big change for the auto industry,” she said during a podcast this month.

For tech companies, replicating the takeover of the mobile-phone industry will not be so easy when it comes to cars. While a glitch might be a nuisance during a video chat, it could be deadly on the Autobahn. That gives automakers some leeway, and Volkswagen is putting the pieces in place.

Alongside Car.Software, the company has teamed up with Amazon for an industrial cloud for its factories and with Microsoft for a separate data network for its vehicles.

Senges’s 42 Wolfsburg is part of the long-term solution. The VW-sponsored school — with a planned budget of $2.4 million a year — is designed to create a new breed of engineers in the shadow of the factory’s smokestacks.

The difference between the software and car industries isn’t as big as one might think,” he said. “The potential we have here is enormous.”