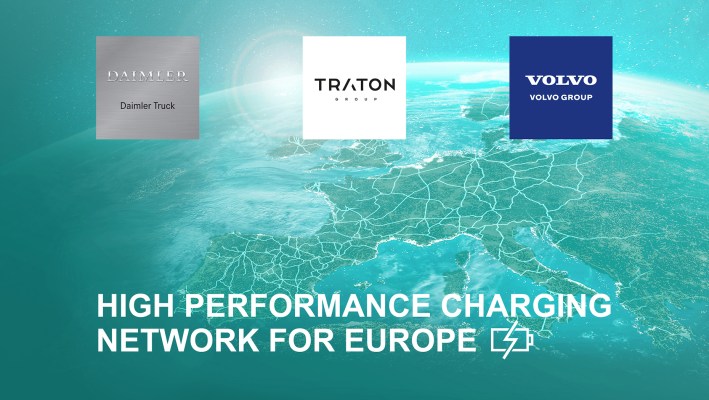 Volvo Group, Daimler Truck and Volkswagon’s AG heavy-truck business the Traton Group announced on Monday a non-binding agreement to build a network of high-performance public charging stations for electric heavy-duty long-haul trucks and buses around Europe. The news was first reported by Reuters.

The three major European automakers will invest €500 million (~$593 million USD) to install and operate 1,700 charging points in strategic locations and close to highways. They intend to finalize the agreement by the end of this year and start operations next year, with the hopes of increasing the number of charge points significantly as the companies seek additional partners for the future joint venture.

The venture is meant to be a catalyst to prepare for the European Union’s goals of carbon-neutral freight transportation by 2050. One of the main deterrents for both individuals and freight companies for switching to EVs has historically been a lack of charging infrastructure. By building that infrastructure, Volvo, Daimler and Traton can also expect to boost their own sales of electric trucks and buses.

“It is the joint aim of Europe’s truck manufacturers to achieve climate neutrality by 2050,” Martin Daum, CEO Daimler Truck, said in a statement.  “However, it is vital that building up the right infrastructure goes hand in hand with putting CO2-neutral trucks on the road. Together with Volvo Group and the TRATON GROUP, we are therefore very excited to take this pioneering step to establish a high-performance charging network across Europe.”

The partnership between Volvo and Daimler isn’t unprecedented. In May, the two competitors teamed up to produce hydrogen fuel cells for long-haul trucks to lower development costs and boost production volumes. This latest venture is another signal that major companies are banding together to solve climate-related issues in the industry.

European car industry association ACEA has called for up to 50,000 high-performance charging points by 2030. Traton CEO Matthias Gruendler told Reuters that roughly 10 billion euros would be needed to build out Europe’s infrastructure to be fully electrified by 2050.

According to a statement released by Volvo, this venture is also a call to action for others with a stake in the industry, like automakers or governments, to work together to ensure the rapid expansion needed to reach climate goals.

The charging stations will be brand-agnostic, and battery electric vehicle fleet operators will be able to use both the fast charging during the European 45 minute mandatory rest period for long-distance transport and also charge overnight.

The joint venture will operate under its own corporate identity out of Amsterdam. Volvo, Daimler and Traton will own equal shares in the venture but will continue to compete in all other areas.