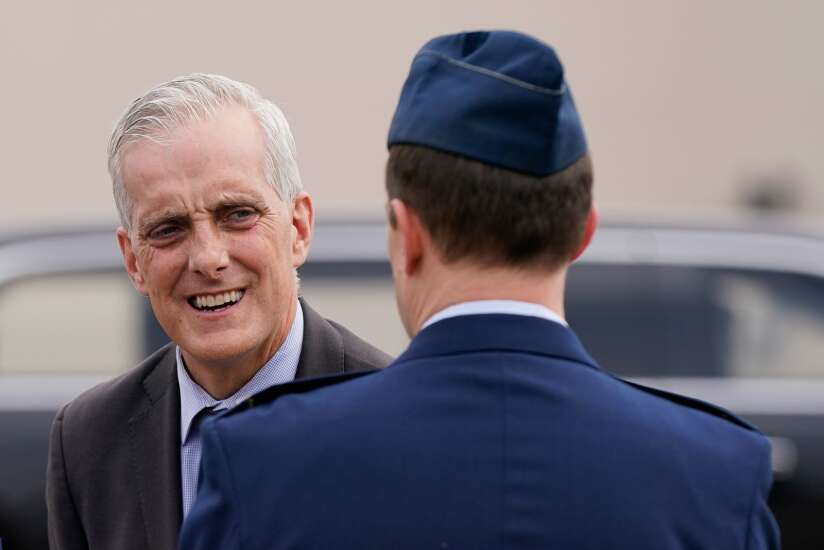 Secretary of Veterans Affairs Denis McDonough speaks March 8 with a member of the U.S. Air Force after stepping off Air Force One with President Joe Biden at Naval Air Station Joint Reserve Base in Fort Worth, Texas. (AP Photo/Patrick Semansky)

The Biden administration released a sweeping plan this week to reposition the sprawling veterans’ health care system to confront demographic changes and shifts in medicine, recommending the closure of hundreds of hospitals and clinics and construction of new ones in areas with greater demand.

Aging hospitals with an excess of unused inpatient beds would close altogether in communities from Muskogee, Okla., to New York City, and would be replaced by inpatient and outpatient clinics nearby or new medical centers, with an overall net reduction of three hospitals. Other medical centers would lose emergency rooms or surgical services but gain mental health or urgent-care clinics. And new nursing homes would be built in communities where large numbers of retired veterans are moving. About 80 new facilities of varying sizes and offering a range of services would eventually be built.

Overall, VA’s reliance on inpatient care would taper off as the system catches up to an outpatient model that private hospitals moved toward decades ago. In many places, the government-run health care system’s growing reliance on private doctors and hospital systems would intensify.

Lawmakers began poring through the fine print in the lengthy proposal this week to learn what would happen to hospitals and clinics in their districts, while some members issued defiant statements that previewed the battle to come.

With changes proposed at most of the system’s existing 171 hospitals and 1,112 outpatient clinics, the plan that will be sent to the congressionally mandated Asset and Infrastructure Review Commission also drew intense interest among veterans groups.

The review mandated by a 2018 law will soon kick off a year of potentially divisive hearings in affected communities, culminating in a recommendation from President Joe Biden on which closures should move forward, then a vote in Congress if lawmakers dislike the proposals. Lawmakers must accept all of the changes or none, and would have to vote to deny the proposals to stop them. If they take no action, the plans would take effect.

“Today’s veteran population is vastly different from what it was even five years ago, let alone decades ago,” Russ Duerstine, deputy director of Concerned Veterans for America, a group backed by the conservative Koch network, said in a statement. “A rigid system that cannot adapt to the changing and unique needs of the veterans it serves leads to waste, complications and ultimately, an absence of care.”

Duerstine’s group came to prominence during the Trump administration with a campaign to outsource more medical care for veterans and was instrumental in muscling the review into the 2018 law, which allowed most of the 9.2 million veterans in VA care to see doctors outside the system of government hospitals.

The restructuring is driven by changing reality for veterans, the report said: The Department of Veterans Affairs spends billions of dollars a year to maintain crumbling facilities that impede doctors from giving veterans the best possible care, and its hospitals increasingly are located in the wrong places. Almost 70 percent of VA’s health care facilities were built more than 50 years ago. According to the agency’s budget submission to Congress for fiscal 2022, the health system needs $61.6 billion worth of construction today.

The population of veterans is declining in the Northeast and parts of the Midwest, and growing in the South and Southwest, changes largely driven by the aging of those who fought during the Vietnam era and the increasing loss of those from the Korean War and the World War II generations. Even though the number of veterans is projected to decline in coming years, they will need more outpatient and long-term support, such as nursing home care — and they need more extensive mental health resources.

While some lawmakers this week said they would keep an open mind about the proposals, others showed early resistance.

U.S. Sen. Jon Tester, D-Mont., chair of the Senate Veterans’ Affairs Committee, took a combative tone on recommendations to close a nursing home and two clinics in Montana and to change the services offered at two other sites. Among Tester’s concerns, and those of other lawmakers who represent rural areas, is whether enough private doctors exist to take in the potentially large number of new veterans if VA hospitals or clinics close.

Former VA leaders in both parties support the plans, though.

“We have to move assets where the veterans are now, not where they lived after World War II,” Robert Wilkie, former President Donald Trump’s second VA secretary, said in an interview.