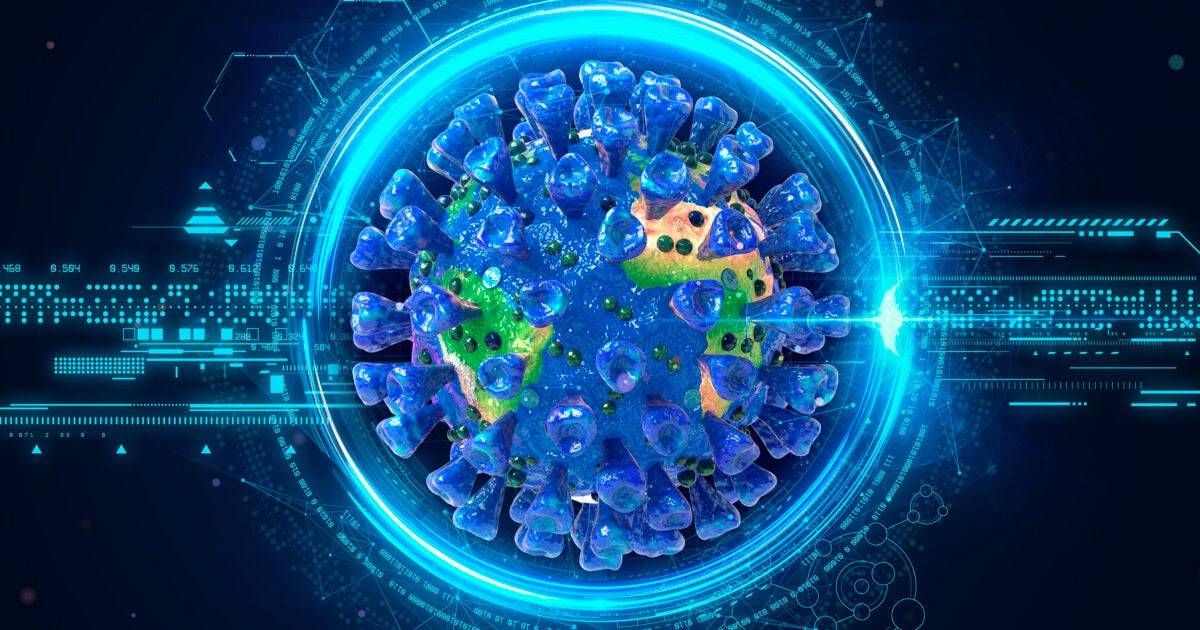 GAZETTE: I think the number that you analyzed — 6 million genomes — would surprise most readers, if you’re talking about unique genomes. How many are there?

LEMIEUX: What we call a genome is a sequence typically from an individual patient. We tend to think of one genome representing one patient’s virus. That’s a pretty good approximation of what’s in the database. But each patient’s infection corresponds to many millions of copies of the virus, so it’s a tiny fraction of the number of SARS-CoV-2 replication events that have occurred in the pandemic.

GAZETTE: Are there at least small variations in the virus in every patient’s body?

LEMIEUX: There are small variations within a given person, but we don’t need to model them all to understand the pandemic. In fact, many of the viral sequences across different individuals are identical at the consensus level. So there are not 6.5 million unique genome sequences. Some are identical. That’s actually what we track, and we even coarsify [generalize] the data to the level of lineages, which are essentially genetically similar groups of genomes that we consider together. Then we ask, in different populations over time: Do we see more of that group of genomes called “the lineage” or fewer of that group of genomes over time? For the purposes of this model, we use 3,000 lineages and each contains a unique constellation of mutations. The mutations, though, can occur in more than one lineage. And that’s where we’re able to get the power to ask which mutations are responsible for a lineage growing over time or dying out. And, because people all around the world are contributing genomes to these databases, we have essentially a real-time view of which lineages are growing in which places, sometimes due to random chance, like a big super-spreading event. But if we find that the same lineage is dominating in Massachusetts and New York and California, that tells us there’s probably something about that lineage. We’re able to infer what that is by doing the same thing for mutations. If we see a mutation like N501Y, for example, that is consistently found in lineages that tend to grow, then we think that there’s something about that mutation that causes that lineage to grow in a population.

GAZETTE: Can this model predict future variants that might arise, or is it really working with existing genomes, sorting out the thousands of lineages for ones that might spread? Can it actually look ahead and say, “Well, this is likely to mutate here. And that’s going to be a problem”?

LEMIEUX: Sort of both. One thing it does well is provide an estimate of the growth rate of the different lineages that are currently circulating. We assign a fitness to every mutation that’s been observed in the population, and if a mutation has never been observed before, we can’t assign it a fitness. So, if there’s a hypothetical strain from combinations of mutations that have been observed in other places, but not brought together in the same lineage before, we can forecast the growth rate for that strain. If we haven’t observed the mutations, the model doesn’t know the effects from that particular mutation.

GAZETTE: How did the work get started?

SABETI: Jacob, as a then-medical-student-turned-postdoc, and another graduate-student-turned-postdoc, Danny Park, had long been investigating methods to detect adaptive variants in microbes, starting with malaria — it was a passion project of the lab’s. Our early work was in detecting natural selection in humans and other mammals, and the challenge there is that, because the generation times are so long, we have to infer historical events. In infectious diseases, what’s amazing is we get to see natural selection unfold before our eyes. We can track it in real time. That’s the power of this approach.

But when Jacob and others began this work on malaria a decade ago, the data was just too sparse. Amidst Ebola, we began to get higher-density data and published work with Jeremy Luban [at the University of Massachusetts Chan Medical School] identifying variants that rose in prevalence. But there was still too little data to make statistical inferences of the nature we can now. With the pandemic, we switched very quickly from a situation in which we didn’t have enough data to a situation we had so much data that people weren’t able to manage it. And it was very heterogeneous data: We didn’t know the data sources; we didn’t know the quality of the sequences and so how to curate and basically tame that massive data set to get robust results.

LEMIEUX: At the time, we weren’t used to working with millions of microbial genomes. We were used to dealing with hundreds or thousands. That’s when we started working with the PyR0 team at Broad, who had come from Uber AI, where they had built this probabilistic programming language to do computation on really large data sets. Fritz Obermeyer was the main person working on this project. He was able to put together a model that made sense of what lineages are transmitting more readily and growing more quickly in the population and represented those lineages by their constituent mutations. The other critical innovation from Fritz’s work is that it can run on modern processing hardware, using innovations in software engineering and modern computing power. That made this possible in a way that wouldn’t have been possible before.

GAZETTE: How important was an interdisciplinary approach in this research? It sounds like you had a lot of different folks involved.

SABETI: This is at the interface of what we call “variant-to-function,” and individuals from mathematics, computer science, and computational biology came together with virologists, molecular biologists, infectious disease researchers, and clinicians. By going from bench to bedside, you see patterns and become intrigued by them.

GAZETTE: Clearly the ability to predict variants and which ones are going to dominate is important. What do you see looking ahead with this model?

SABETI: The Holy Grail the field often looks to is the ability to predict from the outset which mutations will be important and what their effects will be, essentially how a microbe will adapt. To do so, we will need these massive models to really interrogate viral and microbial genomes and, when you see different mutations enough times, start figuring out the patterns and underlying logic. I think we can get to the point where we begin to understand how adaptation is going to happen and how we should address it in the development of our countermeasures, but it will require a lot of data. Whenever people ask, “Have we generated too much data?”, I argue that we haven’t by a long shot. We really should get to the point that it becomes routine to sequence every single microbial genome detected in infections because there are things we don’t even know are possible to ask yet because we don’t have the data.

Sign up for daily emails to get the latest Harvard news.