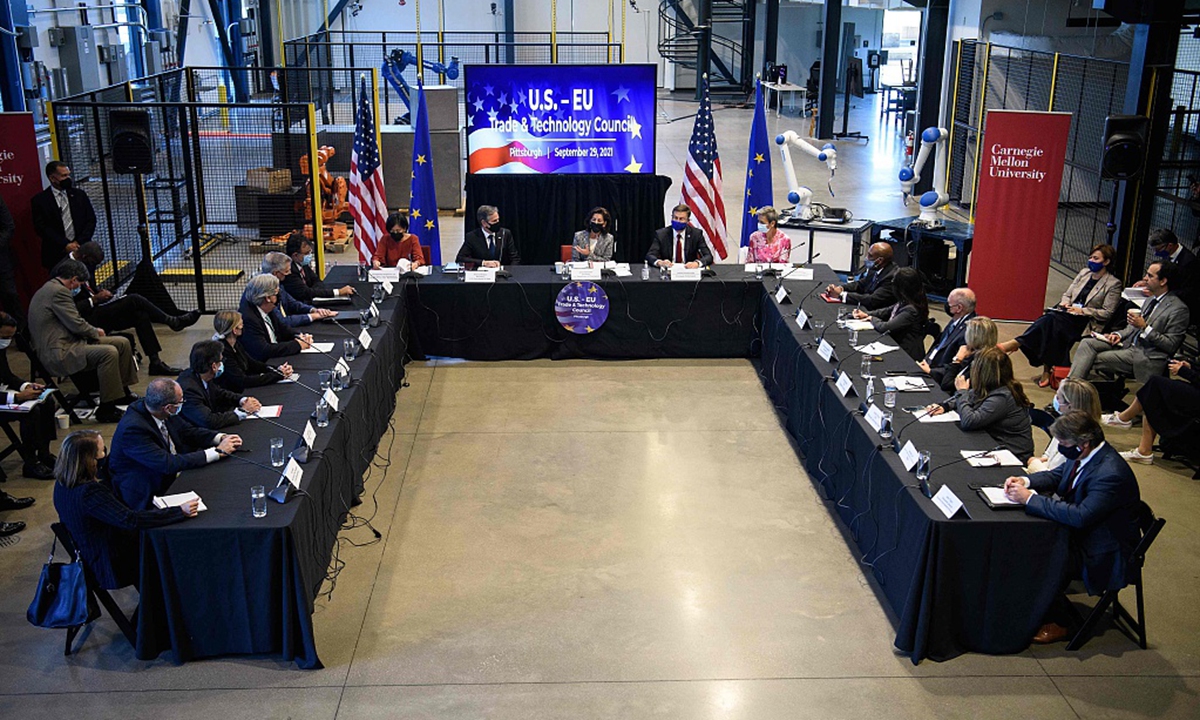 After a recent strategic dialogue between Chinese and EU top diplomats, the US wooed EU on the first US-EU Trade and Technology Council (TTC) meeting, in which “curb China’s non-market trade practices” was raised.

Before the meeting, the so-called China threat had already been used as the bait to attract EU, as US Commerce Secretary Gina Raimondo said on Tuesday that the US needs to work with EU to slow China’s innovation. However, Chinese experts said although Europe and the US have made some progress in transatlantic coordination and cooperation, running competition still exists, and the Brussels would be unwise to side with the Washington against Beijing.

Although the statement after the TTC meeting did not directly mention China, the use of language like “We stand together in continuing to protect our businesses, consumers, and workers from unfair trade practices, in particular those posed by non-market economies, that are undermining the world trading system” has made experts believe that it is targeting China, given the Joe Biden administration has opted to keep the Trump-imposed tariffs against China.

Chinese Foreign Ministry spokesperson Hua Chunying said on Thursday that the statement by a US official once again exposes the true intention of the US to contain and suppress China’s development by all means, which is typical of autocracy and hegemonic actors.

“Cooperation between countries should also serve the interests of the people of all countries, instead of drawing ideological lines, forming alliances, uniting one faction to suppress another, and seeking world hegemony through clique politics,” Hua said.

Xin Hua, director and research professor of the Center for European Union Studies at the Shanghai International Studies University, told the Global Times on Thursday that the US and Europe have a clear intention of gaining the upper hand in the new round of global competition for new technologies and industries.

Their aim is not only to control the development path of global emerging technologies, but also to take the commanding position in the formulation of standards, rules and norms of emerging technologies and frontier industries, so as to prevent China from expanding its influence throughout standards and industry norms, Xin said.

“We can expect more and more cracks in the global technology and trade system formed during the past decades of economic globalization… Protectionist and economic nationalist policies in the US and Europe will become more stringent and complicated,” Xin said.

There are also experts who have pointed out that there is a growing lack of strategic trust between the US and Europe, beginning from Trump’s erratic behavior to Biden’s Afghanistan withdrawal and the snub of France in the AUKUS security pact. US foreign security strategy also puts English-speaking countries, which belong to the Anglo-Saxon system, first and the European continent behind.

There is fierce competition between Europe and the US in both economic and technological fields. The EU wants to benefit from both sides, He Zhigao, a research fellow with the Institute of European Studies, the Chinese Academy of Social Sciences, told the Global Times on Thursday.

He pointed out that the Europe, which has pursued strategic independence, is still evaluating its triangular relations with the US and China in the post-Merkel era. And it will take a long time for the US and the EU to refine and implement the vision reached in TTC meeting.

On a Tuesday dialogue between Chinese State Councilor and Foreign Minister Wang Yi and Josep Borrell, the EU’s High Representative for Foreign Affairs and Security Policy, Wang said the two sides should strengthen coordination on the new round of high-level economic, trade and digital dialogue and continue to advance cooperation in science and technology innovation, finance and energy.

Borrell said that the EU regards China as an important strategic partner and the relationship between the two countries is mature, multi-faceted and non-confrontational nonconfrontational, the Xinhua News Agency reported.

There is coordination between the US and Europe, but China is also coordinating with EU… it is a competition, Li Haidong, a professor from the Institute of International Relations of the China Foreign Affairs University, told the Global Times on Thursday.

Li said coordination between the US and Europe does not necessarily lead to a narrowing space of China-EU ties.

As long as the China-US relations are managed within the realm of competition and will not evolve into a military conflict, Europe will understand that there is benefits to be made between the two superpowers, which means it will be hard for the US to woo Europe, Li said.