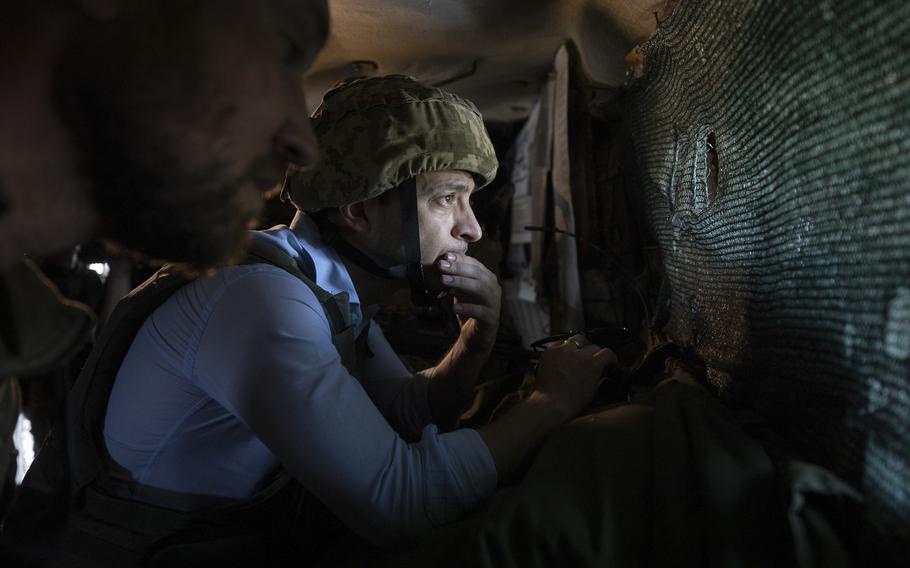 Ukrainian President Volodymyr Zelenskyy looks at a front-line position from a shelter as he visits eastern Ukraine in an undated photo. According to reports on Friday, April 15, 2022, Ukrainian officials are using facial recognition technology on dead or captured Russian soldiers and contacting their families. (Ukrainian Presidential Press Office)

Ukrainian officials have run more than 8,600 facial recognition searches on dead or captured Russian soldiers in the 50 days since Moscow’s invasion began, using the scans to identify bodies and contact hundreds of their families in what may be one of the most gruesome applications of the technology to date.

The country’s IT Army, a volunteer force of hackers and activists that takes its direction from the Ukrainian government, says it has used those identifications to inform the families of the deaths of 582 Russians, including by sending them photos of the abandoned corpses.

The Ukrainians champion the use of face-scanning software from the U.S. tech firm Clearview AI as a brutal but effective way to stir up dissent inside Russia, discourage other fighters and hasten an end to a devastating war.

But some military and technology analysts worry that the strategy could backfire, inflaming anger over a shock campaign directed at mothers who may be thousands of miles from the drivers of the Kremlin’s war machine.

The West’s solidarity with Ukraine makes it tempting to support such a radical act designed to capitalize on family grief, said Stephanie Hare, a surveillance researcher in London. But contacting soldiers’ parents, she said, is “classic psychological warfare” and could set a dangerous new standard for future conflicts.

“If it were Russian soldiers doing this with Ukrainian mothers, we might say, ‘Oh, my God, that’s barbaric,’ ” she said. “And is it actually working? Or is it making them say: ‘Look at these lawless, cruel Ukrainians, doing this to our boys?’ “

Clearview AI’s chief executive, Hoan Ton-That, told The Washington Post that more than 340 officials across five Ukrainian government agencies now can use its tool to run facial recognition searches whenever they want, free of charge.

Some of them are using Clearview’s mobile app to scan faces while on the battlefield, he said. Others have logged in for training while stationed at a checkpoint or out on patrol, the night sky visible behind their faces.

“They’re so enthusiastic,” Ton-That said. “Their energy is really high. They say they’re going to win, every call.”

The company, Ton-That said, first offered its services last month to Ukraine’s Ministry of Defense after he saw Russian propaganda claiming that soldiers captured there were actors or frauds.

The system had primarily been used by police officers and federal investigators in the United States to see whether a photo of a suspect or witness matched any others in their database of 20 billion images taken from social media and the public Internet.

But about 10 percent of the database has come from Russia’s biggest social network, VKontakte, known as VK, making it a potentially useful tool for battlefield scans, Ton-That said.

Clearview shared with The Post emails from three Ukrainian agencies – the National Police, the Defense Ministry and a third agency that asked the company to remain confidential – confirming the software was in use. Officials at those agencies and the IT Army declined to comment further or did not respond to requests for comment. Clearview declined to identify two other Ukrainian agencies it said were currently using its software.

In emails that Clearview shared with The Post, a representative of the Defense Ministry said it had tested Clearview by scanning photos of dead soldiers’ faces and were “pleasantly surprised” when the tool returned links to the Russians’ VK and Instagram accounts.

With the military’s encouragement, other agencies tested the technology, too, Ton-That said. A National Police official said in emails shared with The Post that the agency scanned the face of an unidentified body found in Kharkiv with its head caved in and was pointed to the VK profile of a 32-year-old man who had been photographed with supporters of the Kharkiv People’s Republic, a separatist group.

Ukrainian agencies, Ton-That said, have used the app to confirm the identities of people at military checkpoints and to check whether a Ukrainian is a possible Russian infiltrator or saboteur. He argued that the system could deter Russian soldiers from committing war crimes, for fear of being identified, and said the Ukrainians are considering using the tool to verify the identities of Ukrainian refugees and their hosts as they flee for safety.

But officials’ strategy of informing families of their loved ones’ demise has raised concerns that it could anger the same Russians they had hoped to persuade. One national security expert said other Ukrainian actions – holding news conferences with captured Russian soldiers and posting to social media photos and videos showing prisoners of war – have been seen inside Russia not as a welcomed exposure to the truth but as a humiliation by the enemy.

A video that the IT Army posted to Telegram this month showed snippets of what the group characterized as conversations with Russian soldiers’ relatives. In one chat, someone who was sent photos of a Russian soldier’s bloodied face responded, “It’s photoshop!!! THIS CAN’T BE.” The sender wrote back, according to the footage: “This is what happens when you send people to war.”

In another conversation, a stranger sent a message to a Russian mother saying her son was dead, alongside a photo showing a man’s body in the dirt – face grimacing and mouth agape. The recipient responded with disbelief, saying it wasn’t him, before the sender passed along another photo showing a gloved hand holding the man’s military documents.

“Why are you doing this?” the recipient wrote back. “Do you want me to die? I already don’t live. You must be enjoying this.”

The stranger responded that young men were already dying, by the thousands. This is “the only way to stop all this madness,” the sender wrote. “How many more people must die?”

The Post could not independently verify the conversations, and attempts to reach the mother were unsuccessful. But other elements of the same video show Clearview’s facial recognition search interface alongside names of Russian soldiers. In one clip, the search of one corpse’s face reveals the VK profile of a man photographed standing on a beach. The man’s profile, which remains online, shows he followed online groups devoted to the Russian army as well as fitness, fishing and barbecue.

Mykhailo Fedorov, the head of that ministry, this month shared on Twitter and Instagram the name, hometown and personal photo of a man he said was recorded shipping hundreds of pounds of looted clothes from a Belarus post office to his home in eastern Russia. “Our technology will find all of them,” he wrote.

An official at the agency who spoke on the condition of anonymity told Clearview that it has used the system to identify people who had been detained in the country and check their social media for anything suspicious, including their “range of contacts.” More than 1,000 such searches were run within the first few weeks, the official said in an email that Clearview shared with The Post.

Some analysts said Ukraine could use the advanced technology to draw a contrast with Russia’s more rudimentary military equipment or to pursue humanitarian uses in a conflict marred by horrific Russian attacks.

But facial recognition search results are imperfect, and some experts worry that a misidentification could lead to the wrong person being told their child had died – or in the frenzy of war, could mean the difference between life or death. Privacy International, a digital-rights group, has called on Clearview to end its work in Ukraine, saying “the potential consequences would be too atrocious to be tolerated – such as mistaking civilians for soldiers.” (Ton-That has said Clearview’s search tool is accurate, including in cases of severe “facial damage.”)

The U.S. military used biometric scanners to collect the fingerprints, eye scans and face photos of people during the Afghanistan war, believing it could help confirm allies and identify threats. But during the troops’ rapid withdrawal last year, some of the devices were abandoned, raising fears that the sensitive data could be misused. (Clearview’s online system, Ton-That said, allows the company to quickly sever access if an account falls into the wrong hands.)

Clearview has stirred international controversy for years because of the way it gathered photos for its database, harvesting massive amounts from social media companies and other Internet sites without owners’ consent. The company has faced government investigations, ongoing lawsuits and demands from countries to delete their citizens’ data. Members of Congress have proposed blocking federal money from going to Clearview on the basis that its images have been illegitimately obtained.

In an investor presentation first revealed in February by The Post, the company said it wanted to raise $50 million to expand its offerings to private-industry clients and boost its data-collection powers so that “almost everyone in the world will be identifiable.”

Ukraine’s aggressive use of Clearview searches have pushed the private company onto the front lines of a diplomatically fraught conflict – one that even the U.S. government has engaged cautiously in, for fear of triggering a global war. Hare, the researcher, said the company appeared eager to use its Ukraine work as a way to advertise itself to government clients around the world and “cash in on tragedy.”

Ton-That said the company’s sole ambition is to help defend a besieged country. But he also acknowledged the war has helped provide a “good example for other parts of the U.S. government to see how these use cases work.”

“This is a new war,” he said. And the Ukrainians are “very creative with what they’ve been able to do.”

The Washington Post’s Jeanne Whalen in Riga, Latvia, and Magda Jean-Louis in Washington contributed to this report.