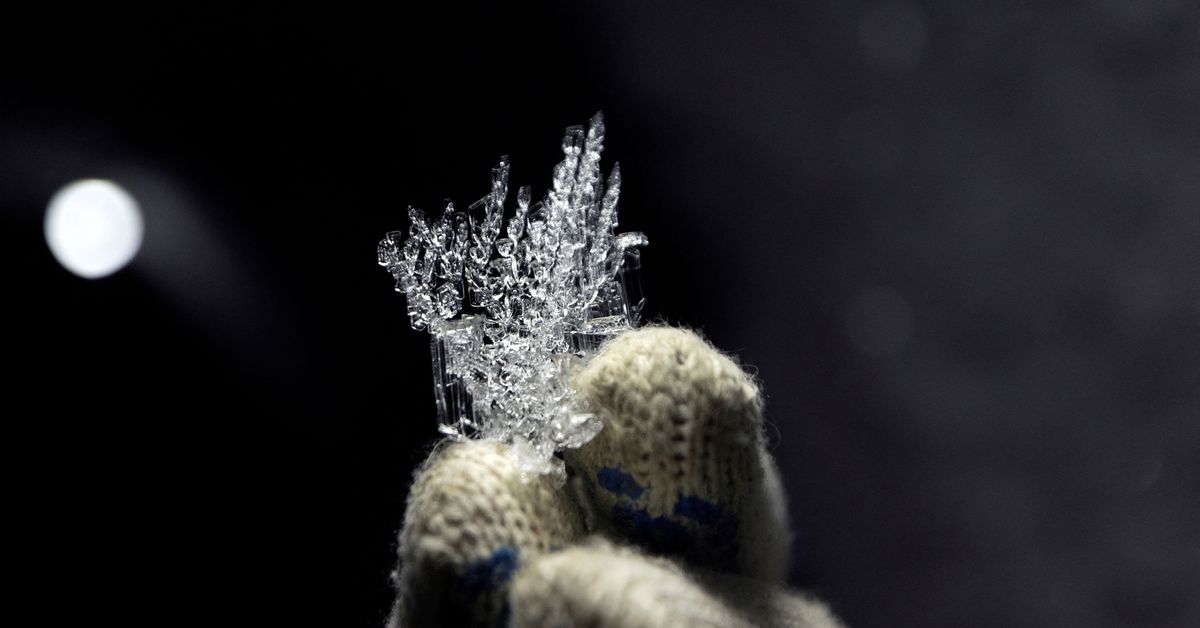 LONDON, April 10 (Reuters) – Dozens of international scientists have arrived each year since 2000 at Russia’s remote Northeast Science Station on the Kolyma River in Siberia to study climate change in the Arctic environment.

Not this year, though.

Following Russia’s invasion of Ukraine, Germany’s Max Planck Institute for Biogeochemistry froze the funding used to pay personnel at the research station and to maintain instruments that measure how quickly climate change is thawing Arctic permafrost and how much methane – a potent planet-warming gas – is being released.

The funding freeze will probably lead to an interruption of the continuous measurements at the station dating back to 2013, compromising scientists’ understanding of the warming trend, said Peter Hergersberg, a spokesperson for the Max Planck Society, which is funded by the German state.

“(Russian) colleagues at the Northeast Science Station try to keep the station running,” Hergersberg said. He declined to say how much funding was withheld.

Reuters spoke with more than two dozen scientists about the impact of the Ukraine conflict on Russian science. Many expressed concern about its future after tens of millions of dollars in Western funding for Russian science has been suspended in the wake of European sanctions on Moscow.

Hundreds of partnerships between Russian and Western institutions have been paused if not canceled altogether, the scientists said, as the invasion has unraveled years spent building international cooperation following the Soviet Union’s 1991 collapse.

Many communication channels are closed and research trips have been postponed indefinitely.

The projects affected by the suspension of Western assistance include the construction of high-tech research facilities in Russia, such as an ion collider and a neutron reactor for which Europe had pledged 25 million euros ($27.4 million).

Such technology would unlock a generation of research that could contribute to everything from fundamental physics to the development of new materials, fuels and pharmaceuticals, scientists said.

Another 15 million-euro ($16.7 million) contribution toward designing low-carbon materials and battery technologies needed in the energy transition to combat climate change has also been frozen, after the European Union halted all cooperation with Russian entities last month.

“Emotionally, I can understand this suspension,” said Dmitry Shchepashchenko, a Russian environmental scientist who studies global forest cover and has been affiliated with the International Institute for Applied Systems Analysis in Austria since 2007.

But for science overall, he said: “This is a lose-lose solution. Global issues like climate change and biodiversity … can hardly be solved without Russian territory [and] the expertise of Russian scientists.”

When the Soviet Union broke apart, Russian spending on science plummeted, and thousands of scientists moved abroad or abandoned their fields altogether.

“We felt as scientists that our work was not appreciated,” said permafrost scientist Vladimir Romanovksy, who moved his work to Fairbanks, Alaska, in the 1990s. “There was practically no funding, especially for field work.”

Russian funding has since improved, but remains far below that of the West. In 2019, Russia spent 1% of its GDP on research and development — or about $39 billion, adjusted for currency and price variation — according to the Organisation for Economic Co-operation and Development (OECD).

Most of that money has been spent in physical science fields, such as space technology and nuclear energy.

Russian science got a boost, though, from partnerships on projects with scientists abroad. Russia and the United States, for example, led the international consortium that launched the International Space Station in 1998.

The head of Russia’s space agency, Roscosmos, said this month it would suspend its participation in the space station until sanctions tied to the Ukraine invasion are lifted.

Russian scientists also helped build the Large Hadron Collider, the world’s most powerful particle accelerator, at the European Organization for Nuclear Research in Switzerland, known as CERN. In 2012, the collider made the breakthrough discovery of the elusive Higgs boson, which until then had only been theorized.

Scientific camaraderie with Europe continued uninterrupted after Russia annexed Crimea from Ukraine in 2014. But CERN’s governing council announced last month it was suspending any new collaboration with Russia.

Germany alone has given some 110 million euros ($122 million) toward more than 300 German-Russian projects over the last three years. A further 12.6 million euros ($14 million) in EU funding was awarded to Russian organisations for another 18 projects focusing on everything from Arctic climate monitoring to infectious animal diseases.

Chemist Pavel Troshin recently won Russian state funding for his part in a Russian-German effort to develop next-generation solar cells to power communication satellites. But, with the German side now suspended, the project is up in the air.

Joint projects “are supposed to be done for the benefit of all the world, and cutting out Russian scientists … is really counter-productive,” said Troshin, who works at Russia’s Institute for Problems of Chemical Physics.

“I would never expect something like this. It’s shocking to me. I’m upset very much.”

Among the more urgent research efforts on hold are projects to study climate change in the Russian Arctic.

“Two-thirds of the permafrost region is in Russia, so data from there is critical,” said Northern Arizona University ecologist Ted Schuur of the Permafrost Carbon Network.

“If you cut off your view of changing permafrost in Russia, you’re really cutting off our understanding of global changes to permafrost.”

That’s alarming for scientists as global warming thaws the long-frozen ground that holds an estimated 1.5 trillion metric tons of organic carbon – twice the amount already in the atmosphere today.

As permafrost thaws, organic material locked within the ice decays and releases more planet-warming gases like methane and carbon dioxide. Scientists fear that such emissions could cause climate change to spiral out of control.

Scientists can use satellites to monitor landscape changes due to thaw, but can’t pick up what’s happening below ground, which requires on-site research, Schuur said.

Russian scientists have collected and shared permafrost field data for years, but Western researchers aren’t sure if those communication channels will remain open. Those datasets were also patchy, due to limited funding to cover the vast region.

“Instrumentation that was supposed to go out this year has been halted,” she said, as her colleagues’ travel plans have been canceled.

The U.S. government has issued no clear directive on interacting with Russian institutions, contrary to the European stance.

A State Department spokesperson told Reuters: “We do not hold the people of Russia responsible [for the conflict], and believe that continued direct engagement with the Russian people is essential – including in science and technology fields.”

Projects under the Russian Science Foundation’s state-funded 2021 budget of 22.9 billion rubles ($213 million) had relied on partnerships with India, China, Japan, France, Austria, and Germany, among others.

A spokesperson did not answer Reuters questions about how the halt in European collaboration would affect its work, saying only that the foundation would “continue to support leading teams of researchers and their research projects.”

European scientists had been helping to build Russian research sites including the neutron reactor and the ion collider near St. Petersburg, said Martin Sandhop, a coordinator on this EU-funded effort called CremlinPlus.

The facilities would help to drive research in fields like high-energy physics, biochemistry and materials science.

But plans for a 25-million-euro project extension are now suspended and Sandhop’s team is redirecting experts and equipment toward European institutions.

Cremlin’s neutron detectors needed for the planned reactor, for example, are now going to a facility in Lund, Sweden.

Even if Russia manages to complete the expansion works, it’s unclear how valuable the work will be without the suite of tools at Western institutions to analyse the data.

Physicist Efim Khazanov at the Institute of Applied Physics in Nizhny Novgorod, near Moscow, said not having access to European equipment would hurt his work using a high-energy laser to study topics such as the structure of spacetime in a vacuum, which could expand our understanding of the universe.

Khazanov was among thousands of Russian scientists who signed an open letter, posted on the independent online science publication Troitskiy Variant, saying Russia had “doomed itself to international isolation” with its invasion of Ukraine.

Many Russian scientists also fled the country, said Alexander Sergeev, head of the Russian Academy of Sciences, according to Interfax state news agency.

The protest letter was temporarily removed from the site after Russia passed a law March 4 criminalizing “fake news” on the Ukraine campaign.

That day, a letter was published on the state Russian Rectors’ Union website in support of Russia’s invasion and signed by more than 300 leading scientists, who have since been suspended from European University Association membership.

While foreign funding represents just a small part of Russia’s scientific spending, its scientists relied on that money to keep projects and careers afloat.

“Those joint research grants were helping a lot of Russians,” lamented Russian geographer Dmitry Streletskiy, at George Washington University in Washington, D.C. “I’m just surprised the EU is targeting scientists, which is not the right crowd to target.”