The Energy Security Strategy‘s ambitions are for eight new reactors, plus small modular reactors, helping to produce 24 GWe capacity by 2050, representing about 25% of the UK’s projected electricity demand. 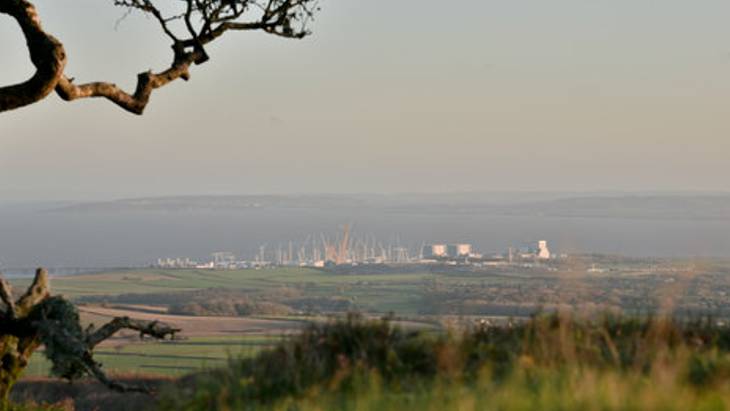 Hinkley Point C will be the first new nuclear plant in the UK this century (Image: EDF)

Nuclear’s share of energy in the UK is currently about 16%, however almost half of the country’s current capacity is due to be retired by 2025 and all but one of its reactors will retire by 2030.

A new government body, Great British Nuclear, is being set up to bring forward new nuclear projects at a rate of about one a year this decade, including the Wylfa site in Anglesey, the strategy says.

UK Prime Minister Boris Johnson said: “We’re setting out bold plans to scale up and accelerate affordable, clear and secure energy made in Britain, for Britain – from new nuclear to offshore wind – in the decade ahead.

“This will reduce our dependence on power sources exposed to volatile international prices we cannot control, so we can enjoy greater energy self-sufficiency with cheaper bills.” 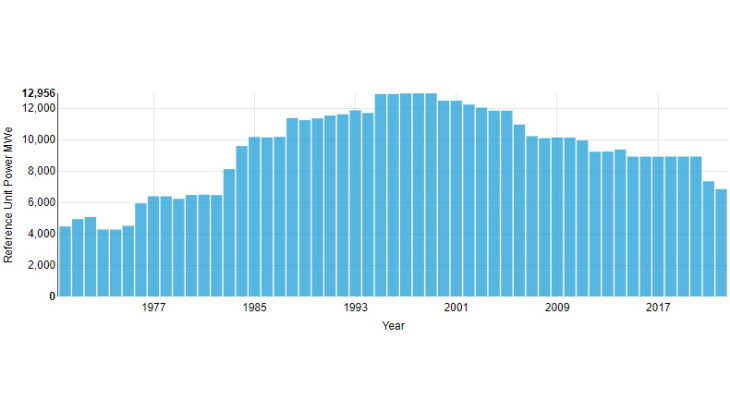 As well as the expansion of nuclear, the strategy also includes a large increase in offshore wind – up to 50 GWe or enough to power every home in the UK, plus 5 GWe from floating offshore wind in deeper seas. Planning rule changes are also proposed to cut approval times from four years to one year.

However, amid reports of differences within Johnson’s Conservative Party about onshore wind, the strategy commits only to “consulting on developing partnerships with … communities who wish to host onshore wind infrastructure in return for guaranteed lower energy bills”.

There will also be a licensing round for new North Sea oil and gas projects “recognising the importance of these fuels to the transition and to our energy security, and that producing gas in the UK has a lower carbon footprint than imported from abroad”.

And on solar power the ambition is to increase the current 14 GWe capacity by five times by 2035, with possible changes in the rules governing solar projects on rooftops. There is a doubling of the ambition to 10 GWe of low carbon hydrogen production capacity, “with at least half coming from green hydrogen and utilising excess offshore wind power to bring costs down”.

UK Business and Energy Secretary Kwasi Kwarteng said: “The simple truth is that the more cheap, clean power we generate within our borders, the less exposed we will be to eye watering fossil fuel prices set by global markets we can’t control.

“Scaling up cheap renewables and new nuclear, while maximising North Sea production is the best and only way to ensure our energy independence over the coming years.”

The UK currently has one nuclear power station under construction, at Hinkley Point C in Somerset in south west England. Construction began in December 2018 for the plant which is composed of two EPR reactors of 1630 MWe each. The start of electricity generation from unit 1 is expected in June 2026, with unit 2 following in 2027 with a projected lifespan of 60 years. Negotiations between the government and EDF are on-going for a replica project of Hinkley Point C at Sizewell C in Suffolk in eastern England. There is also a project under way to extend the life of Sizewell B by 20 years to 2055.

Commenting on the new strategy, World Nuclear Association Director General Sama Bilbao y León said: “Governments across the world should be following the UK’s example and setting out policies that put nuclear as an essential and substantial component of their long term energy strategies.

“With widespread agreement that nuclear has a key role to play in delivering a clean, affordable and secure energy mix it is vital that governments, industry and other key stakeholders work together to ensure we not only set out ambitious plans, but also deliver on them.”

The energy strategy was welcomed by those involved in the nuclear industry in the UK, with EDF’s UK CEO Simone Rossi saying that “building more new nuclear will reduce Britain’s dependence on overseas gas and keep energy prices stable, creating thousands of jobs while we’re doing it”.

“At Hinkley Point C we’re already building British nuclear, with 3600 British businesses and 22,000 people making it happen, including over 800 apprentices. The fastest way to get more nuclear in Britain is get on with the next two units at Sizewell C. It’s a copy of Hinkley Point C, the design is approved and ready to go, and British manufacturers are experts in how to build it. Building more of the same design is the best way to bring down costs and develop a strong UK supply chain.”

He said: “This investment will also create tens of thousands of jobs across the country and revitalise a world class skills base right here in Britain. The ambition and determination to do much more and quicker is very welcome.

“Along with removing barriers to projects getting started, building investor confidence by ensuring nuclear is classified as green in the UK taxonomy and making it eligible for green bonds are important next steps. We also want to see the money from the promised Future Nuclear Enabling Fund allocated at pace, with good sites being made available for project development.”

Dawn James, vice president Nuclear Power, for Jacobs said: “We are working on Hinkley Point C, on the Rolls-Royce Small Modular Reactor, on Urenco’s U-Battery micro reactor, and on nuclear fusion. We believe that large scale reactors, small modular reactors and fusion power will play a crucial part in reducing our dependency on fossil fuels and we are working to ensure that the UK is at the forefront of developing them.”

Chris Ball, Managing Director, Nuclear & Power EMEA at Atkins, said: “Strengthening security of supply means creating a resilient energy system, fuelled by a mix of low-carbon technologies and renewable sources without dependence on any one fuel or region. The Energy Security Strategy unveiled by the UK government today will go some way towards achieving this in the medium to long-term.”

He added, “Our sector has a major role to play in engineering net-zero and ensuring a viable plan is created to deliver secure and clean energy supplies that will power the UK’s net-zero economy. We look forward to working with government and across the industry to ensure these ambitions translate into a successful and efficient energy system.”

Sharon Graham, the general secretary of the UK’s largest union for energy workers, Unite, said: “It has taken a war and a global crisis to get this government to act on the long-standing and vitally important issue of meeting the energy needs of the country and the planet. This is something we have been pushing for years.

“Now we have promises of investment and new jobs. But the devil will be in the detail. Government investment must be tied to UK job guarantees and not be syphoned off to boost offshore profits. There can be no further delays on delivering the new jobs and they must be union jobs, covered by collective bargaining, good pay, terms and conditions.”

George Borovas, head of Hunton Andrew Kurth’s nuclear practice, said: “It is great to see that the UK’s Energy Security Strategy has recognised the importance of giving nuclear energy a central role in the country’s future energy mix. Not only will this contribute to meeting net-zero goals, but it will also secure the UK’s energy independence in the long-term alongside investments in wind, hydro and solar power.”

“The events in Ukraine have underscored the need for energy independence in the UK. New nuclear ticks all the boxes for a self-reliant UK as it is carbon-free, will re-purpose existing ‘brownfields’ sites, and will play a key role for the developing hydrogen economy,” said Vince Zabielski, Partner at international law firm Pillsbury. “Kudos to the UK government for a return to rational thinking as regards energy policy.”

On the overall strategy, the opposition Labour Party criticised the lack of targets for onshore wind power, saying that there was nothing in the energy strategy to provide help with soaring energy bills in the near future and no support for energy efficiency and reducing demand for energy. And EOn UK’s CEO, Michael Lewis, said that “by abandoning any extra commitment to helping people to improve their homes, today’s announcement condemns thousands more customers to living in cold and draughty homes, wasting energy and paying more than they need to for their heating”.