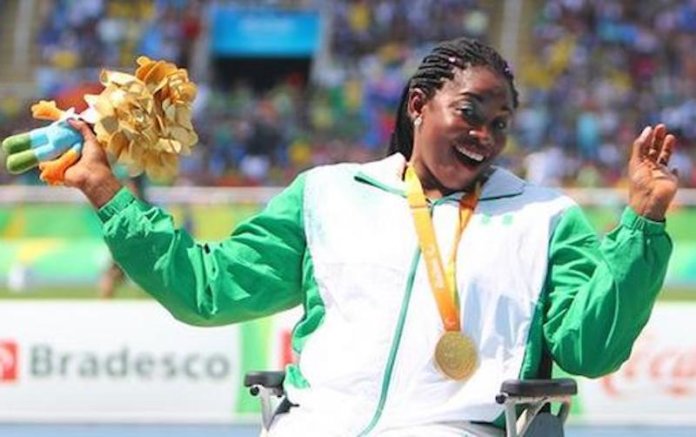 Team Nigeria ended its Tokyo 2020 Paralympic Games campaign on Saturday morning at the Tokyo Olympic Stadium, raking in one more gold and a bronze to finish with four gold, one silver and five bronze medals and 32nd overall on the log.

Flora Ugwunwa claimed Nigeria’s fourth gold of the Tokyo Games in the F54 javelin on the last day of competition.

Lauretta Onyinye started the closing day of Nigeria’s contest by winning bronze in the women F40 shot put event and Ugwunwa a brought icing on the cake with gold in the F54 javelin event.

Lauretta who competed under very difficult conditions on the wet and slippery grounds of the stadium threw 8.29 metres, not enough to rattle gold medalist Sliwinska Renata of Poland whose 8.75 metres cancelled off Lauretta’s games record of 8.40m set in Rio 2016, and Djelal Salem of Algeria secured the silver with 8.33 metres.

Ugwunwa turned the story around in the F54 javelin finals, Nigeria’s last event, dusting her opponents with 18.39 metres throw to leave Kurbanova Nurkorn of Uzbekistan and Yang Liwan of China in the second and third positions.

Speaking shortly after achieving the gold feat, Ugwunwa said, she planned to achieve more at the Paralympic Games but remains thankful to God for the gold medal.

“My aim was to break my own record and set a new one. We had good training during our camping, thanks to the Minister of Sports (Sunday Dare) who ensured that the conditions were conducive, but the situation changed somewhat as we got into Japan. I had a little bit of difficulty with the time zone and weather, and I also became ill. All the same, I kept on and I thank God I ended with the gold.

“I dedicate it first to God who has been my strength and then to my husband and children, to my coach, Patrick Anaeto, as well as to coach Ade who has been very helpful through this period.”

It is not quite so for Lauretta who is unhappy with her bronze and feeling like a queen who just lost her crown.

“I thank God that I won something but this is not my position. I came into this competition as the Paralympic Games record holder and I intended to defend that and possibly extend the record.

“I know I could have done better but the conditions were bad for me. Look at the throw with which they won the gold and silver. I did more than that even in training but see how I lost the gold.

“First, they disqualified my competition shoes at the last call room. I couldn’t borrow from my competitors some of who had two or three standard shoes. Even my canvass was over size. I had to compete bare footed. It was drizzling throughout, the ground was slippery and without shoes, I was always mindful not to fall. I had just one socks which constantly got soaked and I kept pulling it out and squeezing it.

“Seeing that I was trailing in the third position, I decided to give everything in my last attempt but while I had a long throw which would have given me the gold, I slipped and fell across the line and it was ruled a bad throw.

“I do not know why they disqualified my shoes. I was told it is no longer allowed but nobody told me. My coach didn’t seem to know about it too because he has not been allowed to go for competitions with me. He was not with me in Tunisia as well as in Dubai as they said there was not enough fund to take him,” she recalled.