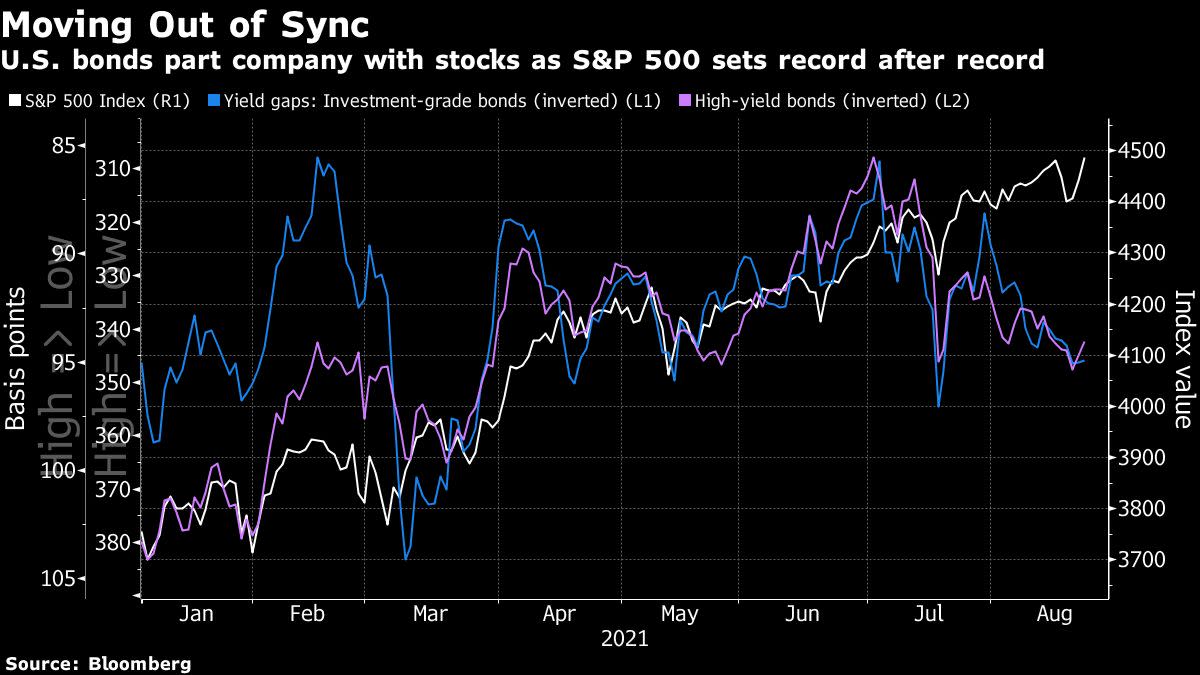 (Bloomberg) — U.S. equities rose to record highs as strong corporate earnings and a rally in commodity prices outweighed lingering concerns about the threat of Covid-19 to the global economy.

The S&P 500 and Nasdaq 100 gained as Best Buy Co. became the latest U.S. retailer to report robust consumer demand while the price of oil and iron ore similarly gained on improving sentiment.

“As long as the economic and corporate earnings environments continue to improve, the market is likely to withstand ongoing concerns about the virus and policy,” said Lauren Goodwin, economist and portfolio strategist at New York Life Investments. “That said, risks for the market are becoming more balanced as we move throughout the market cycle.”

While markets started the week with a strong global rally, equities in the U.S. and Europe remain volatile on concern over the spread of the delta variant and tighter monetary policy. Economic data so far this week have painted a mixed picture, with manufacturing purchasing managers’ indexes in Europe and the U.S. showing continued growth, though slowing from last month’s levels.

“How the Fed tapers is the next major variable for this market,” wrote Tom Essaye, a former Merrill Lynch trader who founded The Sevens Report newsletter. “We do not expect these specifics to be announced on Friday. They will come at the September meeting. But we do expect Powell to hint at an outcome, and given the Fed’s changes to the conference (masks, more social distancing, Powell virtual), if there’s going to be a surprise, it’s likely dovish.”

With the Pfizer Inc. vaccine gaining full approval in the U.S. and cases falling in many of the original delta-variant hot spots, optimism is growing about the momentum of the global economic recovery, especially after strong corporate earnings.

“We are starting to see a bit of decoupling between new waves of the virus and how the markets — and how the economy — reacts to it,” Dan Skelly, head of market research and strategy at Morgan Stanley Wealth Management, said in a Bloomberg TV interview. “We do expect virus concerns to subside in the coming weeks.”

Stephen Dover, chief market strategist and head of Franklin Templeton Investment Institute, said “incredible” corporate earnings growth has been better than expected, which will be vital if the rally is to continue.

“The U.S. just keeps continuing to outperform, to which we keep saying, how long can this go on?” Dover said. “How long does it really make sense that the U.S. still outperforms the rest of the world, at least in terms of the equity market? And the answer seems to be, well, at least a bit longer.”

Earlier in the session, a rebound in Chinese tech stocks also drove gains in global equities after solid results at JD.com Inc. drew in investors including Cathie Wood. In Asia, equities in Japan and China gained while in Europe, the Stoxx Europe 600 index ended a mixed day little changed.

Iron ore climbed on expectations additional support from the Chinese government will boost demand. WTI crude rallied to above $67 a barrel. Treasuries fell and the dollar was slightly weaker.

Here are some events to watch this week: