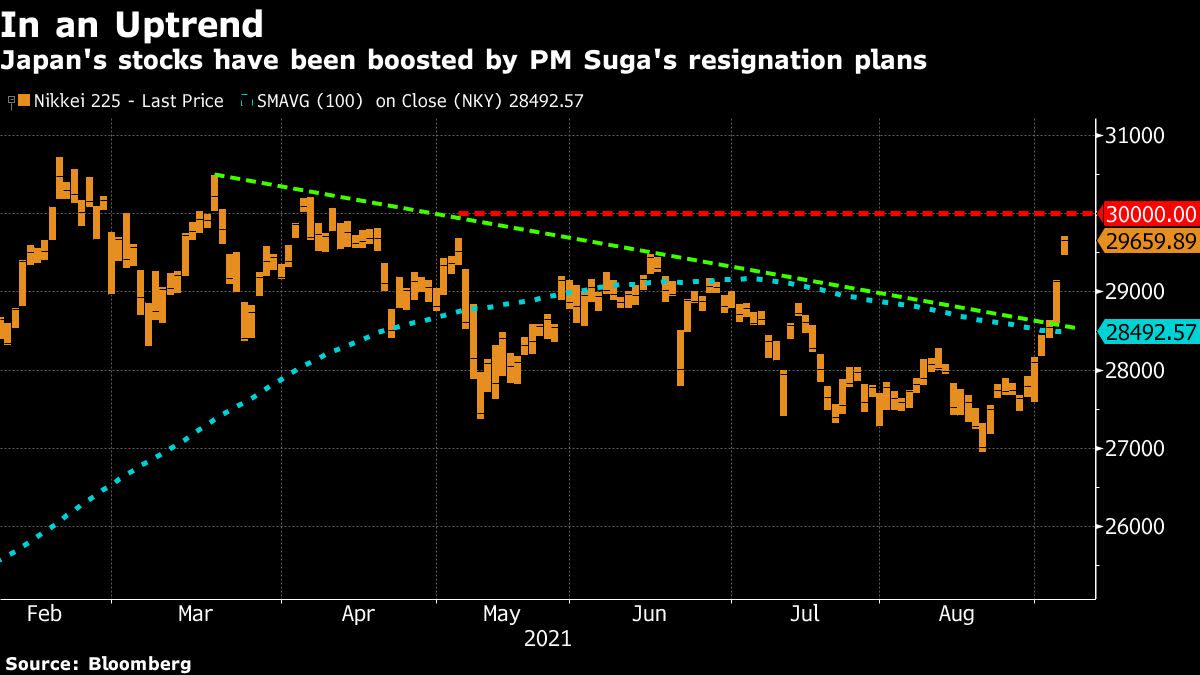 (Bloomberg) — U.S. stocks slipped from near records after traders returned from the long weekend to worries that the economic recovery is faltering.

The S&P 500 and Dow Jones Industrial Average declined, while gains in heavyweight tech stocks including Netflix Inc., Amazon.com Inc. and Apple Inc. pushed the Nasdaq 100 higher even as about seven out out of every 10 stocks in that gauge dropped. European markets slipped as investors speculated that euro-zone policy makers may get ready to roll back stimulus. The greenback strengthened for a second day amid rising bond yields and softer commodity prices. Bitcoin plunged as El Salvador became the first country to adopt it as legal tender Tuesday.

The broad retreat in equities came after investors on Friday left for a three-day holiday weekend with markets near all-time highs following a much weaker-than-expected U.S. jobs report. And there won’t be much by way of data this week to ease their minds about the outlook for the third quarter, with growth estimates already having been reduced recently. At the same time, concerns about the Covid-19 delta variant impeding reopenings in the U.S. are pressuring some corners of the market.

“The delta variant concerns are weighing down on overall third-quarter growth,” said Haris Khurshid, portfolio manager at Fate Capital management. “The next couple of weeks are going to be pretty rocky. We’re seeing investors become more picky with their stocks not only because of the delta concern but also because of fading fiscal stimulus, legislative policies and an overall slowing recovery in some sectors”

On Tuesday, data showed Chinese exports and imports grew faster than estimated in August, easing some concerns that the pandemic is delaying economic reopenings and creating global supply-chain bottlenecks. Even so, investors remain nervous over the prospects for a growth slowdown and tapering of support outside the U.S., especially in Europe.

The Stoxx 600 dropped 0.5% as investors focused on the European Central Bank’s Thursday meeting where policy makers will decide if they’ll dial down emergency stimulus. Bank of America said it sees the “Goldilocks combination” of accelerating growth and lower real yields coming to an end. In Australia, the central bank stuck with a planned reduction in bond purchases, even though a majority of analysts had expected policy makers to hold off the tapering.

U.S. Treasury yields rose, with the 10-year rate increasing 5 basis points. The dollar advanced the most since Aug. 26. Japan’s Nikkei 225 rose for a seventh straight session, touching 30,000 for the first time since April, boosted by an index reshuffle and optimism that a new prime minister will usher in favorable policies. MSCI Inc.’s gauge for global stocks halted a seven-day rally.

Chinese stocks traded in the U.S. including Alibaba Group Holding and Baidu Inc. rallied after equities in China advanced amid renewed demand for technology shares and the surprise trade data. Vertex Pharmaceuticals dropped to a three-week low after Morgan Stanley cut its stock recommendation to underweight.

Bitcoin plunged as much as 17% to its lowest level in a month. El Salvador bought 400 coins as it adopted the cryptocurrency as legal tender. Tuesday’s drop came amid news that the government disconnected its Bitcoin wallet to fix problems and tests are being run tests to make it available for download later in the day.

What to watch this week: