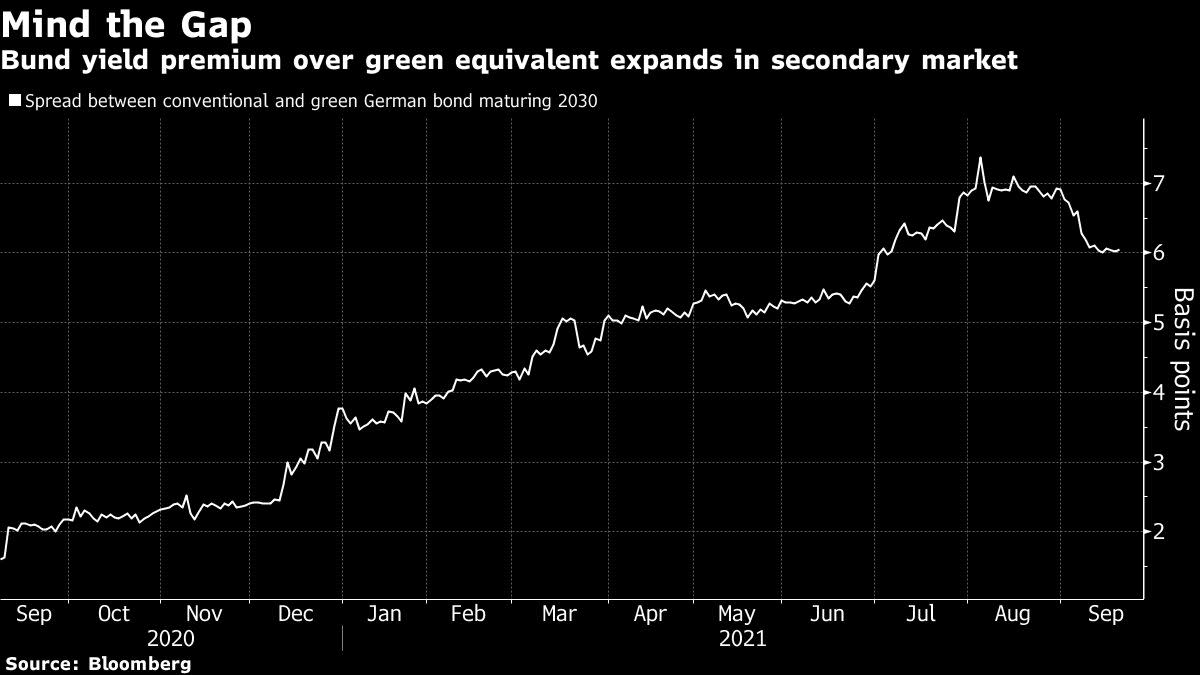 The U.K.’s green bond debut broke records as investors jumped on the most anticipated sterling debt sale of the year.

The nation sold 10 billion pounds ($13.7 billion) of green debt maturing in 2033, a record for a green bond sale. It attracted more than 100 billion pounds of orders, an all-time high for both U.K. gilts and the global green market, beating Italy’s debut earlier this year.

“It’s an important market development that I suspect will be a catalyst for issuance in the U.K.,” said Scott Freedman, a portfolio manager at Newton Investment Management, which runs 1.7 billion pounds in sustainable bond funds.

While a boom in global sales looks set to take ethical debt issuance toward $1 trillion this year, deals in sterling remain a small fraction of that. Britain’s funding effort, with another bond expected this year, still leaves it as a latecomer, with most western European countries including France, Germany and Ireland having sold such debt.

The U.K. managed to achieve slightly lower borrowing costs compared to conventional debt, according to RBC Europe Limited. That was something sought by Robert Stheeman, the head of the U.K.’s Debt Management Office, who said last year that green gilts would be merely a “symbolic” step unless investors were prepared to pay more.

Tuesday’s deal priced at 7.5 basis points over the June 2032 gilt, for a so-called greenium of 2.5 basis points — the biggest yet for a high-grade sovereign issuer, according to HSBC Holdings Plc, one of the bookrunners on the deal. While borrowers in green debt typically shave off some cost, investor demand exceeded “even the lofty expectations we had,” said Asif Sherani, HSBC’s head of DCM Syndicate EMEA.

“It’s reassuring that a large funding requirement has been met with record demand in the government’s first foray into the space,” said David Katimbo-Mugwanya, a fund manager at Edentree Investment Management. “Governments have a pivotal role to play in this transition, not just from a regulatory standpoint but also on the funding side.”

The U.K. will raise at least another 5 billion pounds from green debt this fiscal year, with a second sale for a 20- or 30-year maturity planned next month. The proceeds will be managed through a unique sustainable debt framework, which lays out how the funds can be used, such as spending on zero-emission buses and offshore wind power.

Projects also require reports on the social benefits such as jobs, an element not normally included for green bonds. Efforts to boost the ‘S’ in ESG investing have taken off since the pandemic.

“The launch of our first green bond is a signal that the U.K. continues to be a world leader in this area,” said Chancellor of the Exchequer Rishi Sunak, who had forecast the sale would be the biggest ever. “In helping us to build back better and greener, it will also help to create jobs as we transition to net zero.”

While this social element appeals to ethical funds, overall the plans have drawn mixed views from specialists. Bryn Jones, the manager of Britain’s largest ethical bond fund, praised the social reporting, but Triodos Investment Management BV said the spending didn’t meet its standards due to proceeds being used for carbon-capture technology and so-called blue hydrogen.

That didn’t stop the clamor for orders. Bank of America Corp. strategists including Agne Stengeryte said demand will have been particularly strong from the pension industry where ESG considerations are becoming more important. The DMO’s Stheeman said demand came from domestic players integrating ESG into their decisions, plus new overseas investors to gilts.

It’s a success for the bookrunners on the deal, which comprise a rollcall of some of the biggest underwriters in this booming market: JPMorgan Chase & Co., Bank Paribas SA, Citigroup Inc. and Deutsche Bank AG, plus Barclays Plc.

“Taking into account the huge demand and the slim allocations relative to a brown gilt syndication, we expect this gilt to perform well in the coming days and months,” said Matthew Amis, an investment director at Aberdeen Standard Investments. “What matters to us is the use of proceeds — in this case we are encouraged by the creation of a separate general account by HM Treasury where the proceeds will be held and tracked.”