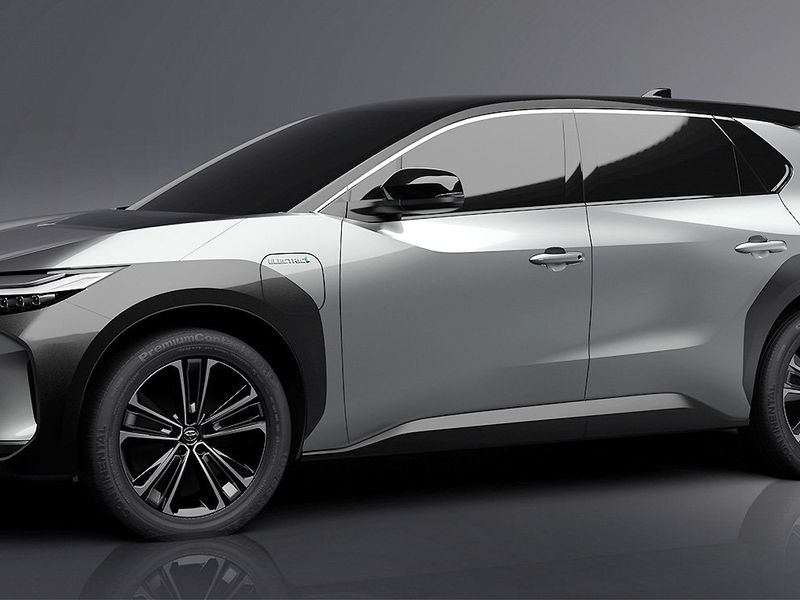 TOKYO — Toyota has disclosed fresh details about its first serious foray into the expanding world of electric vehicles — saying its new bZ4X midsize crossover EV will get a 71-kilowatt hour battery, 500-km (310-mile) driving range and a high-tech steer-by-wire system.

The futuristically styled SUV is the first EV to ride on the company’s e-TNGA dedicated electric vehicle platform. It kicks off a batch of seven bZ-badged pure electrics the world’s biggest automaker plans to launch by 2025 as it dives into the global EV race.

The bZ4X goes on sale in mid-2022, targeting worldwide markets including the U.S., Europe, Japan and China. The bZ in the subbrand’s nomenclature derives from Beyond Zero, a reference to zero emissions. The numeral stands for the vehicle class, the X for the body type.

The 4 in bZ4X approximates the size of the Toyota RAV4, but Toyota said that creative packaging allowed by the all-electric layout helps deliver a roomy D-segment interior. Other model names might use 1, 2 or 3 to signify smaller vehicles, or drop the X for offerings that are not crossovers.

Toyota showed a bZ4X concept at the Shanghai auto show in April. The production version will compete against rivals including the Volkswagen ID4, Kia EV6, Ford Mustang Mach-E and Tesla Model Y.

The bZ4X will be produced in Japan and China and sold worldwide. Because volumes are expected to be limited, at least in the initial sales period, Toyota intends to manufacture the EV in mixed production on lines with traditional vehicles, said Daisuke Ido, project general manager of the Toyota ZEV Factory, which spearheads the company’s EV products.

That is opposed to building it on a dedicated EV-only production line, as other automakers do.

Toyota fleshed out specifications for the Japan-market edition on Friday. While many details such as battery size and range might differ by market, the announcement tells the world where Toyota’s head is at regarding EVs and foreshadows what to expect overseas.

The bZ4X was co-developed with Subaru and is the Toyota-branded sibling to the Solterra EV crossover Subaru plans to introduce in the near future.

It will come in front-wheel and all-wheel drive. In Japan at least, both variants get a 71.4 kWh lithium ion battery.

The awd version has an 80-kW motor on both the front and back axles and can accelerate to 62 mph from a standstill in 7.7 seconds. Its range is 285 miles.

The batteries will get top of class capacity retention of 90 percent after 10 years, Toyota said.

Inside, the bZ4X gets some futuristic treatment befitting a next-generation EV.

A massive upright digital display dominates the dashboard, while the instrument panel is positioned low and recessed from the steering wheel, which juts toward the driver like a canon.

Toyota said this layout helps create a sense of open space in the cabin while improving visibility.

The bZ4X will offer two steering options. One is the traditional circular steering wheel. The other is a Formula One-styled wing-shaped handle that connects via a steer-by-wire technology. Toyota calls this the “one-motion grip” setup and said it will be introduced in China and then rolled out to other markets from 2022, although it did not specify which ones.

And because there is no steering column, it also allows for more legroom.

A charging port flap is positioned behind the front wheel. Blacked-out, oversized wheel arch cladding lends a rugged big-footed feel to the stance, and the rear gets wraparound lighting.

Toyota’s future EVs are being developed at a new unit called the ZEV Factory, short for zero-emissions vehicle. The EV architecture divides the car into modules, for the front, center, rear, battery and motor. The idea is to mix and match these building blocks into different body types.

The approach supports rear-wheel, front-wheel and all-wheel-drive layouts, as well as battery packs ranging from 50 to 100 kWh. The batteries will be mated to two types of motors, small or medium. Motor output is expected to range as high as 150 kW.

Beyond Zero is Toyota’s catchphrase for its 2050 ambition to achieve carbon neutrality and move beyond zero environmental impact to having a net positive impact on the ecosphere and society.

Aside from the seven bZ models planned before 2025, which includes the bZ4X, Toyota plans two other EVs, coming from its premium brand Lexus.

Toyota expects its global deliveries of electrified vehicles to quadruple to 8 million by 2030, from 1.96 million in 2020. About 2 million of the target figure will be zero-emissions vehicles — hydrogen fuel cells and battery-electrics — though full-electric vehicles should account for the lion’s share.