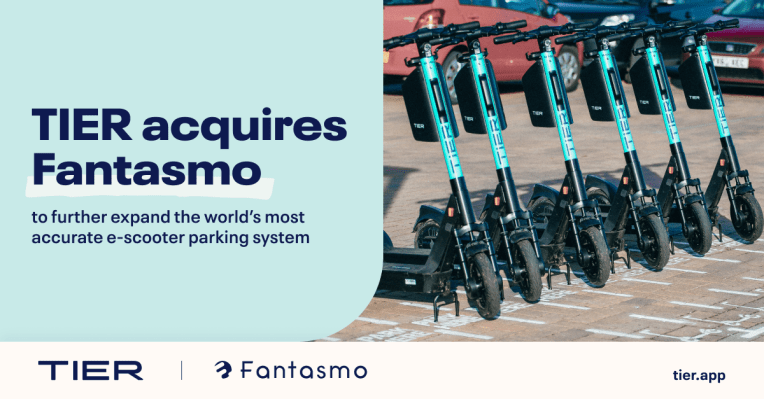 Shared micromobility company Tier Mobility said on Wednesday it has acquired Fantasmo, a U.S.-based computer vision-powered e-scooter parking startup whose tech Tier had been trialing in multiple cities in Europe.

Tier will bring on all of Fantasmo’s 15 staff members and continue to invest in and develop what will now be an in-house Camera Positioning System (CPS) technology that the company says is more accurate than GPS and can validate e-scooter marking within 20 centimeters or less.

The acquisition signals both Tier’s commitment to abating the “public nuisance” effect of scooters parked on sidewalks and its continued pattern of acquiring strategically to either vertically integrate capabilities or gain more land and vehicles.

Neither company would share the terms of the deal, something we’ve come to expect from Tier. This is the Berlin-based company’s fourth buy in five months, each one as financially mysterious as the last. In November 2021, Tier bought German bike-sharing startup Nextbike, and in December, it acquired Wind Mobility’s Italian e-scooter operations, Vento Mobility. More recently, Tier purchased Spin from Ford, marking its sweeping entrance into the North American market.

Tier has been implementing Fantasmo’s mapping solution to eliminate irresponsible parking for the last year, first in Paris and later in other locations, including London, York, Dusseldorf and Leipzig. The CPS technology involves riders using the camera on their phones to scan the environment around where they’ve parked the scooter, taking in information like patterns in buildings or signage to determine the position of the vehicle. That metadata is then compared against Fantasmo’s 3D maps to position exactly where the vehicle is located.

Fantasmo has about 20 to 25 cities mapped out predominantly in Europe, with some in North America, according to Ryan Measel, co-founder and CEO of Fantasmo. With Tier’s backing, that number will likely grow, but not just for Tier’s benefit.

Fantasmo has other micromobility operators in its portfolio, including Helbiz. Tier said it doesn’t intend to cut any relationships if the counterpart has an interest to continue, and is committed to making Fantasmo’s technology widely available by expanding its R&D budget to accelerate development.

“We’ll be taking our service and using it internally, but also offering it as a service to other operators with the idea that this can be a solution for cities in general and bring the whole market up to a point where it can operate in a fashion to meet with compliance needs,” Measel told TechCrunch.

This means that not only does Tier benefit from bringing Fantasmo’s tech onboard, but it can also potentially add another revenue stream by selling the service to other operators or applications.

Most of the major players in the industry are currently trialing or implementing some version of scooter ADAS that not only protects against bad parking, but also inappropriate riding. For example, Superpedestrian acquired Navmatic last year to integrate the company’s hyper-accurate location-based technology that can also detect and correct unsafe riding behavior. Bird developed a similar tech in-house.

On Wednesday, Tier also announced its plans to introduce a new computer vision-based driver assistance technology that can detect traffic violations and collisions, as well as reckless scooter riding. This tech will be enabled by Fantasmo’s CPS for high positional accuracy and centimeter-level mapping and paired with a vision sensor and Tier’s new IoT platform.

“Riders who do not follow the rules and regulations will be alerted to their offenses and may even be fined or banned,” Tier said in a statement. “The new technology is currently being tested privately and will be rolled out in cities around the world in the coming months.”

The company would not supply any more information about this “new technology,” like what specifically is meant by “vision sensor” and how Tier’s new IoT platform would help facilitate this. The company did say, however, that it is working with existing companies to determine the best solution for sidewalk detection and inappropriate riding behavior.

Spin, which, again, is now part of Tier, is working with Drover AI to implement computer-vision technology that essentially involves strapping a camera to a scooter, allowing it to “see” if it’s being ridden in the correct road lane, if it’s on a sidewalk or if it’s parked inappropriately. Tier itself is also running a similar program with Luna across Dublin City University campuses.

Drover AI said it wasn’t working on a new project with Tier, but Tier said it would continue to work with Luna in Ireland and with Drover via Spin in the U.S.

Correction: This article previously stated that Tier would not be integrating further with existing partnerships.