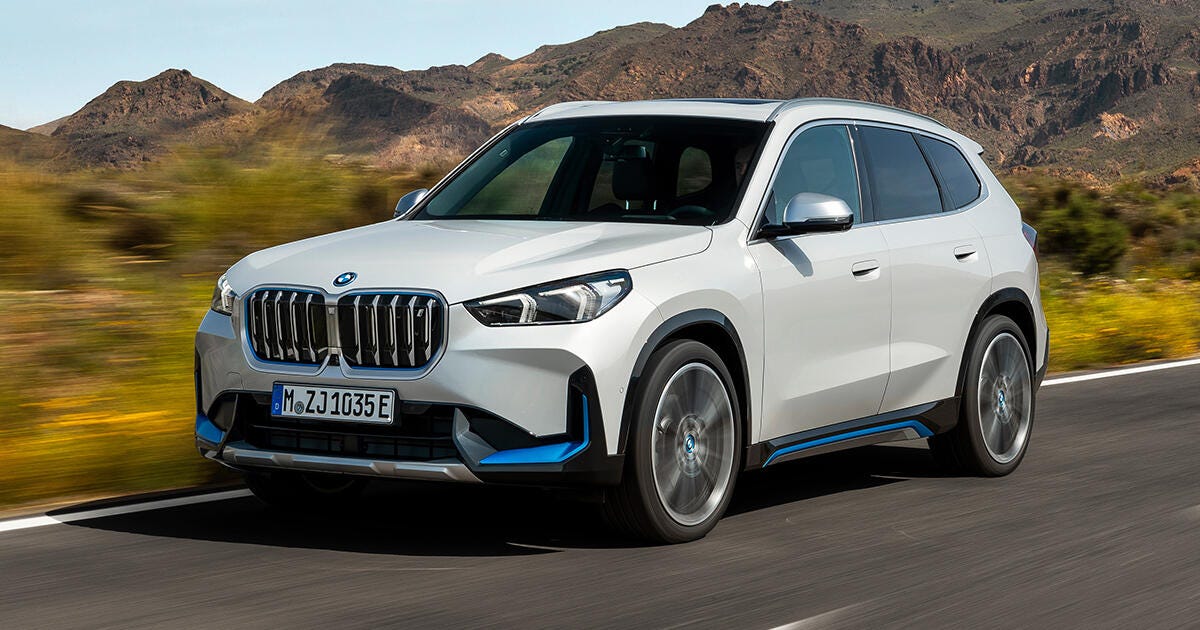 BMW unveiled the third-generation X1 SUV earlier this week, which features better styling, a nicer interior and a major tech update. But the bigger news in Europe is the debut of the iX1, a fully electric version of the redesigned crossover.

Like with the i4 Gran Coupe and China-only i3, the iX1 looks pretty much the same as its gas-powered sibling. It has blue accents on the bumpers and side skirts, and the large grille is blocked off and has an i badge and more blue stripes. Wheels up to 20 inches in size are available, and the iX1 is offered with the same xLine and M Sport appearance packages as the X1. The iX1’s interior is unchanged too, though its large curved screen has EV-specific pages and graphics.

The iX1 is initially being offered in xDrive30 guise — more variants may come later. It has an electric motor at each axle for a total of 308 horsepower and 364 pound-feet of torque, 67 hp and 69 lb-ft more than the X1’s turbocharged inline-4. BMW says the iX1 will hit 62 mph in 5.7 seconds, about half a second quicker than the X1. On the European WLTP cycle BMW quotes a driving range of up to 272 miles, and it can be charged from 10% to 80% in 29 minutes on a 130-kW charger.

Somewhat unsurprisingly the iX1 won’t be sold in the US — its main competitor, the Mercedes-Benz EQA, isn’t either. The iX1 is available to pre-order now in Germany, with the SUV set to go on sale a few months after the regular X1.