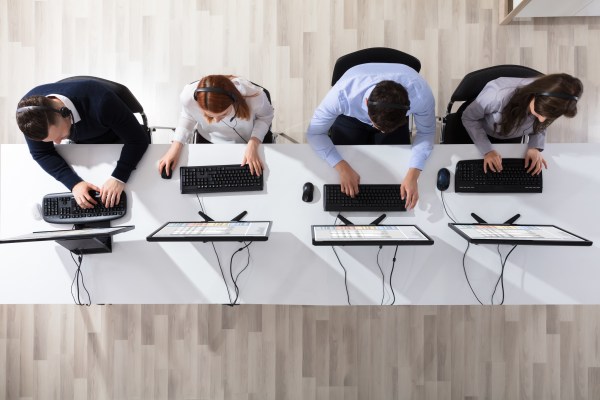 Talkdesk uses artificial intelligence and machine learning to improve customer service for midmarket and enterprise businesses. It counts over 1,800 companies as customers, including IBM, Acxiom, Trivago and Fujitsu.

“The global pandemic was a big part of how customers interact and how we interacted with our customers, all working from home,” Paiva said. “When you think about ordering things online, call, chat and email interactions became more important, and contact centers became core in every company.”

San Francisco-based Talkdesk now has $498 million in total funding since its inception in 2011. It was a Startup Battlefield contestant at TechCrunch Disrupt NY in 2012. The new funding follows a $143 million Series C raised last July that gave it a $3 billion valuation. Prior to that, Talkdesk brought in $100 million in 2018.

The 2020 round was planned to buoy the company’s growth and expansion to nearly 2,000 employees, Paiva said. For the Series D, there was much interest from investors, including a lot of inbound interest, he said.

“We were not looking for new money, and finished last year with more money in the bank that we raised in the last round, but the investors were great and wanted to make it work,” Paiva said.

Half of Talkdesk’s staff is in product and engineering, an area he intends to double down in with the new funding as well as adding to the headcount to support customers. The company also has plans to expand in areas where it is already operating — Latin America, Europe, Asia and Australia.

This year, the company unveiled new features, including Talkdesk Workspace, a customizable interface for contact center teams, and Talkdesk Builder, a set of tools for customization across workspaces, routing, reporting and integrations. It also launched contact center tools designed specifically for financial services and healthcare organizations and what it is touting as the “industry’s first human-in-the-loop tool for contact centers and continues to lower the barrier to adopting artificial intelligence solutions.”

In addition to the funding, Talkdesk appointed its first chief financial officer, Sydney Carey, giving the company an executive team of 50% women, Paiva said. Carey has a SaaS background and joins the company from Sumo Logic, where she led the organization through an initial public offering in 2020.

“We were hiring our executive team over the past couple of years, and were looking for a CFO, but with no specific timeline, just looking for the right person,” Paiva added. “Sydney was the person we wanted to hire.”

Though Paiva didn’t hint at any upcoming IPO plans, TI Platform Management co-founders Trang Nguyen and Alex Bangash have followed Paiva since he started the company and said they anticipate the company heading in that direction in the future.

“Talkdesk is an example of what can happen when a strong team is assembled behind a winning idea,” they said in a written statement. “Today, Talkdesk has become near ubiquitous as a SaaS product with adoption across a broad array of industries and integrations with the most popular enterprise cloud platforms, including Salesforce, Zendesk and Slack.”