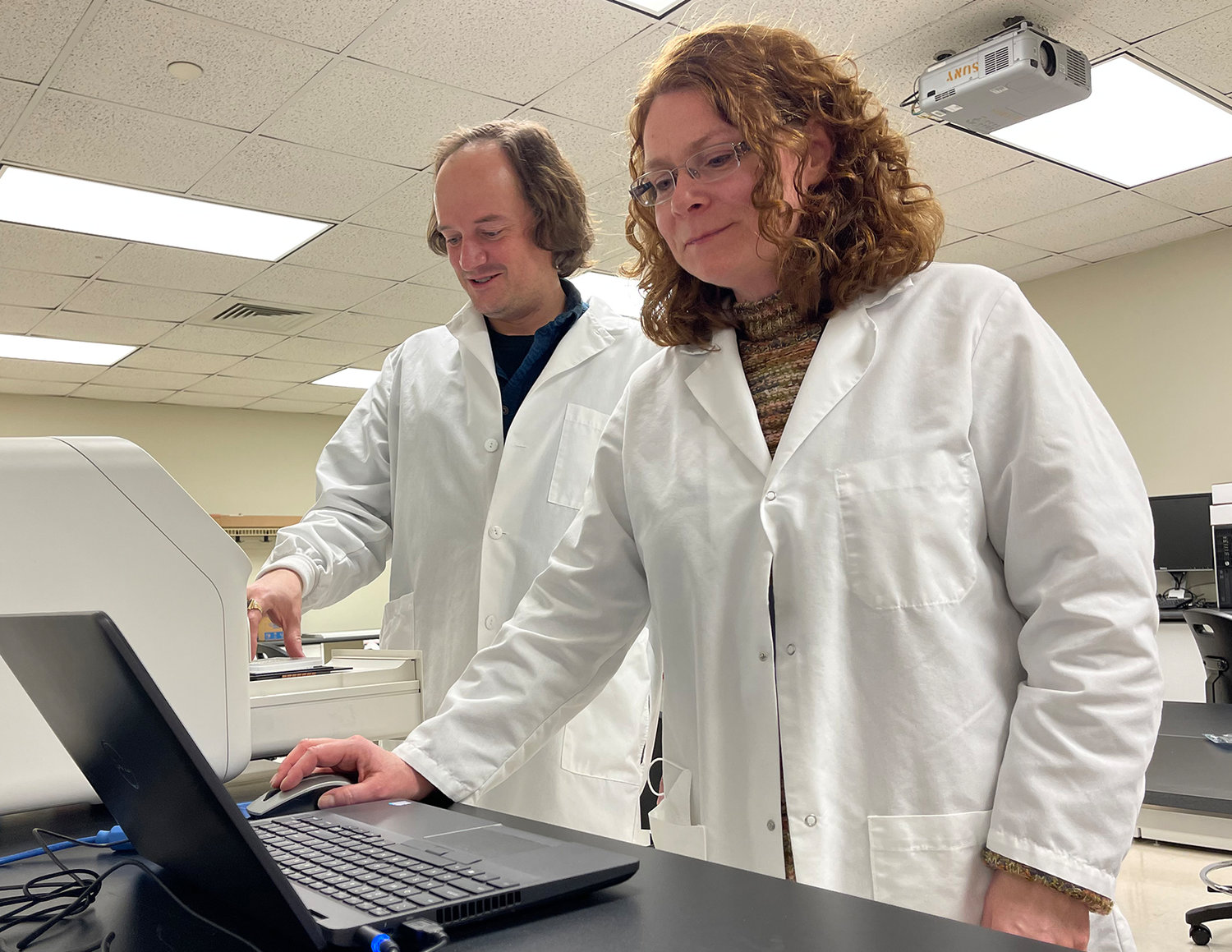 UTICA/ALBANY — The State University of New York Polytechnic Institute has announced Assistant Professor of Biology Adam McLain with Assistant Professor Lauren Endres have received more than $105,000 from the National Institute on Aging, a division of the National Institutes of Health (NIH) as part of an overall $439,000 collaborative research effort with University of Minnesota Associate Professor Christopher Faulk.

Spanning SUNY Poly’s Utica and Albany campuses, the research will provide hands-on experience for students as it focuses on understanding genetic aging-related processes across mammalian species, and could eventually lead to the study of famously long-lived organisms such as tortoises and macaws.

“On behalf of SUNY Poly, I am proud to congratulate Drs. McLain and Endres for this NIH grant in collaboration with the University of Minnesota that will support understanding of the ways in which our DNA, as well as the DNA of other mammals, remains robust in the face of processes that can exacerbate aging,” said Acting President Tod A. Laursen. “This research will not only support experiential student learning, but it will also make use of synergies via the use of wet-bench resources across our two campuses, and I’m excited to learn about the team’s findings once they are available.”

The two-year research initiative will examine the “on/off” switches of genes that are believed to be connected with aging processes in mammals, with an eye toward better understanding why regions of DNA that are richer in cytosine and guanine (CpG) are less likely to be switched off by the addition of a methyl group, which typically can change the usual activity of the DNA segment, potentially spurring effects of aging.

The effort, which will leverage resources and research expertise across both of SUNY Poly’s campuses in Utica and Albany will include tissue acquisition, primer design and optimization, and DNA isolation, in addition to computational data and analysis.

“I am proud to congratulate Professors McLain and Endres, as well as the University of Minnesota for receiving this funding from the NIH. Their work can expand our understanding of how genetic processes can change over time and lead to the results we recognize as aging,” said SUNY Poly Dean of the College of Arts and Sciences Dr. Andrew Russell. “This research is intriguing because it seeks to discover these genetic impacts across mammalian species. We are equally excited that it will also enable students to gain the type of exciting and meaningful research experience that SUNY Poly is known for.”

“I am thankful to the National Institute on Aging at NIH for this grant, as well as our partnership with the University of Minnesota, and also look forward to working closely with Dr. Endres and a number of SUNY Poly students to advance this important research,” said McLain. “Dr. Faulk and I have already found a strong correlation between CpG density in the promoter regions of genes related to functions important to lifelong health and lifespan in over one hundred mammalian species through a computational analysis of whole genomes, and we are eager to test this in a wet-bench environment.”

“I would also like to express my gratitude to the NIH’s National Institute on Aging for this significant support, as well as for our collaboration with Dr. Faulk, as we leverage SUNY Poly’s state-of-the-art resources at both of the institution’s Utica and Albany campuses to better understand aspects of the evolution of genetic mechanisms related to aging,” said Endres. “We also look forward to finding potential long-term practical applications related to the study of aging in humans, including DNA methylation analysis and effects on the aging transcriptome.”

Significantly, Drs. McLain and Endres will work with several SUNY Poly undergraduate students, guiding them as they participate in the research and gain first-hand experience by assisting with laboratory work, including DNA analysis.