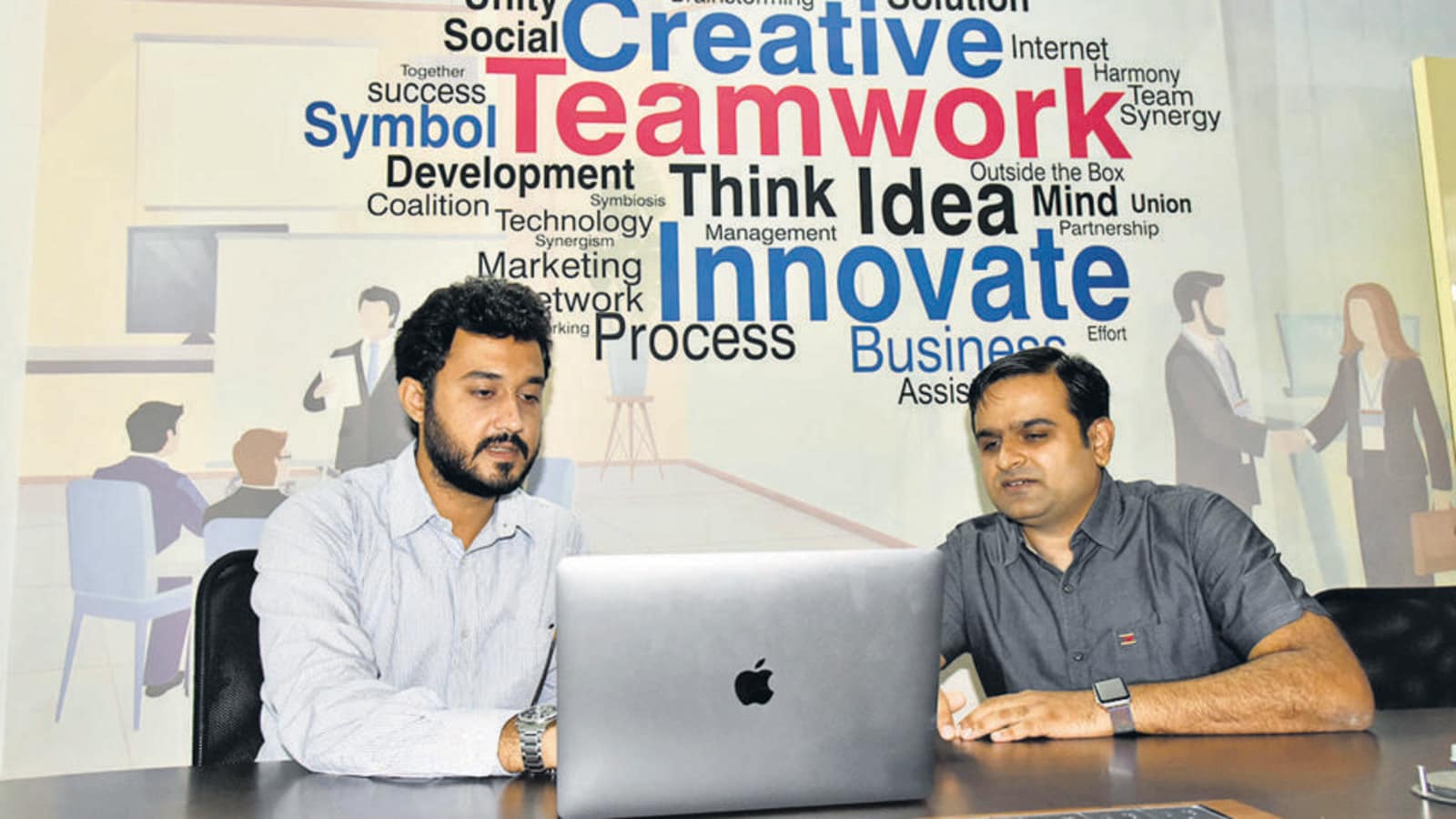 EDGENeural.ai is a deep-tech startup ushering in a new AI paradigm by building an AI-based platform that can, the company claims, automatically craft robust, scalable and efficient deep neural networks for EDGE devices.

It brings AI in the hands of every developer to make the adoption of AI faster, smarter, and secure.

The startup is currently backed by the NVIDIA Inception Program, T-Hub, StartupIndia, Microsoft for Startups, and Nasscom DeepTech Club 2.0

Dhairya Badiyani and Sarvesh Devi, both from Satara district, studied engineering in Pune.

After completing undergrad, both went to the US for further studies, and a few years later returned to form their own startups.

However, they did not know each other until they joined an independent startup – Badiyani as its cofounder and Devi as the chief technical officer (CTO). While that startup got acquired in August 2019, the duo started a joint venture, and founded EdgeNeural.ai in December 2019.

Badiyani has been fascinated by Artificial Intelligence (AI) since 2009, after he was introduced to the field by his project guide from MIT Pune. Devi was working as a software developer until the 2008 recession and then moved to Silicon Valley for exposure.

Computing, deploying AI models (algorithms) on resource-constrained EDGE devices is a challenge for all companies.

Deploying AI models on an EDGE device means understanding complexities of hardware so that the algorithm runs efficiently.

Says Devi, “In January 2020 we started facilitating AI on EDGE. Then Covid hit and the entire world was shut down. We realised, bringing something futuristic in to pandemic times was going to be difficult. During Covid, touchless technology came into picture and we assumed that the timing was right. We got associated with some institutes that wanted facial recognition technology that could be deployed across any platform – mobile, computers, cloud infrastructure or a standalone EDGE device. We created an attendance tracking application using facial recognition. Within a month we were able to sign hundred users for our facial recognition-based attendance tracking.

“Within three months the customer base went up to 500. We were able to quickly able to build prototype, start testing and deployment. Our facial recognition algorithm worked with or without mask, with 95 per cent accuracy. We did something that helped us survive that phase, but our heart was in building a platform enabling companies to build AI for EDGE devices, and make that journey easy.”

Badiyani said, “We focussed on the EDGENeural platform idea. We did a lot of market research. We were able to generate a good amount of data points confirming that deploying AI on EDGE devices is really a big concern in the ecosystem. It was a trigger for us that we need to pivot; facial recognition can go on if needed, but this is the future and we have to solve this problem so that adoption increases.”

On the EDGE of a cloud

Cloud is a centralised architecture where the entire data sits there and the data processing also happens there. It is dependent on internet connectivity and the response time is longer. One can’t rely on cloud infrastructure for time-critical applications. Decision- making capacity on the device itself is the next step.

Badiyani claims, “Every industry will adapt to EDGE where time is critical, device is remote and there is poor or no internet connectivity. EDGE brings in advantages of local processing, data security and faster response time. We do not have to rely on internet connection. Only the critical data which needs to be post-processed can be sent, but the rest of the decision making can happen on the device.”

Says Badiyani, “EDGENeural platform is a developer tool. Our customer would typically be a solution provider or solution builder or a system integrator. We will provide our platform and they will be able to build AI models for the EDGE infrastructure.”

Devi adds, “A typical timeline to build an EDGE AI product prototype takes anywhere between three and six months. It takes another six months for a ready product or a solution. With this huge timeline, the process becomes very complex. With our platform, we can reach prototype stage in a month and production stage in the same quarter.”

“We want to make EDGENeural globally available so that enterprises or developers or AI engineers can utilise our platform and build efficient AI models on smaller EDGE computing devices. The platform is under development. All three modules – training, optimisation and deployment – are ready with us. We are stitching them together so that it becomes a developer tool. Any developer can train and optimise the model, specifically to what hardware they want to build towards and deploy,” explained Dhairya.

There are other complimentary features on the platform like version-based controls for AI models.

Says Devi, “We can reduce time-to-market for a product on an EDGE AI solution by two to five times. Also, considering various parameters, we can enhance the performance of AI models by up to seven times. Accuracy of model is not compromised, while improving performance. We can also reduce the cost by 75 per cent – the cost reduction is in terms of bringing experts who can build EDGE AI solutions and the recurring cloud infrastructure cost.”

Badiyani says, “We have recently signed up our first paying customer. We have closed the deal and development is happening now. Three customers are in line. We are doing Proof of Concept (POC) with a bunch of other companies. All these are India-based companies. In the first quarter we are focussing on India as a market, and then in the next or third quarter our goal is to bring on US clients and grow globally.”

Raising funds was very interesting journey, says Badiyani. “We want to build a global company, a developer company which will require good team. The company was bootstrapped until March 2021. The product was in alpha version at that time. We showed our capabilities to investors. Being very futuristic, initially we got some resistance. We took it as a good feedback, we evaluated, fine-tuned what we are trying to build. Even the business model that we had proposed initially evolved. It took us sive months to close our first investor in February 2021 – High Net Worth Individuals (HNI) based in the US, with a technology background. This is the first investment –that we received.”

“Followed by that, we were in conversation with our existing lead investor Anicut. Primarily, they wanted to move forward. Being a technology driven company, it was not just about money, but also about what more value investors can add to the company. Our lead investor like Venkat Raju is a seasoned entrepreneur especially in the AI domain. We thought he could help us accelerate growth. The market for EDGE AI is not just limited to India. US, Europe, and APAC markets are also worth exploring. Within a span of a month-and-a- half, we were able to bring in investors for the amount we wanted to raise. This seed round was the first institutional fund we accessed,” Badiyani adds.

The amount raised by EDGENeural during the seed round is undisclosed.

Says Badiyani , “The startup was initially bootstrapped and we had invested $40,000 which gave us a runway of about a year. Devi and I were not taking any salary. After funding, our goal is to bring in more team members and people from varied backgrounds in AI, Edge computing, and hardware. Considering all this, we have now a runway of around 15 to 16 months.”

“Being a tech company, creating IP and strategic partnerships is going to be play very crucial role in terms of growth of EDGENeural. Currently we are a six-member team and we also have two interns. Now our plan is to grow the team and heavily invest in building the technology. Our first beta product release is expected to happen by December 2021. We want to support more and more hardware on the platform for maximum usability. This will be our journey for the next six months,” says Devi.

Explaining the revenue model, Badiyani says, “At present, Python is most preferred language for building AI algorithms and solutions. There are around 8.2 million python developers around globe. It is estimated that 35 per cent of these will be working on AI algorithms in the near future. Our goal/target is to cater to five per cent of those, which would give us a market of 150k to 200k python developers.”

“Our platform is a tool that will be subscription based. It will be per user, per month or an annual subscription model. We are estimating that in the coming few years, if are able to bring on 150k to 200k python developers onto our platform, we can reach up to $5.6 million monthly recurring revenue,” Badiyani claims.

“We will have two versions. The community version will be free for users for research or trial basis. The enterprise version pricing would start from $849 per month. Pricing will vary on features selected,” he adds.

“As investors, we see a lot of value in the technology created at EDGENeural.ai, which in turn will unlock new opportunities for many businesses across different industries. What impressed us most was a strong and unique business model – one that is easily scalable in India and beyond.”

“Edge Computing has a massive market opportunity, but its adoption has been stymied by developers forced to make significant compromises with tools and technologies built in a different era and/or repurposed from cloud (hub) centric architectures. EDGENeural’s platform should help accelerate and fully realise the potential of Edge computing. We are looking forward to being a part of EDGENeural for the long term and accelerating growth as well as building a global company.”