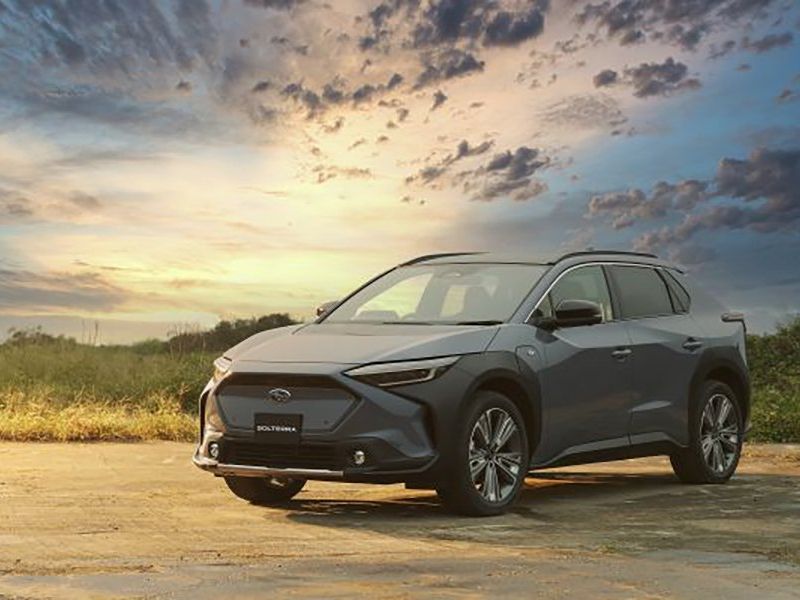 TOKYO — The Solterra, Subaru’s first global electric vehicle, is pure Subaru on the inside, with its all-wheel-drive setup. But on the outside, it shares a lot with Toyota.

That is because the Solterra electric crossover, which made its global debut here Thursday, is the badge-sharing stablemate of the Toyota bZ4X — and is the spitting image of its sibling, from the oversized wheel cladding and beveled back fender to the funky wraparound taillight motif.

The Solterra stands apart from the bZ4X with an EV-inspired variant of the Subaru brand’s hexagon grille as well as its bracket-shaped rear lamps. The headlights also get a Subaru vibe.

But the design differences between the Solterra and bZ4X, unveiled last month, cleave close, in the vein of the Subaru BRZ and Toyota 86, the sporty coupe combo that is also a joint product.

When the Solterra goes on sale in mid-2022 in the U.S., Canada, Japan, Europe and China, Subaru says it will win buyers with the brand’s trademark X-Mode awd control system. Subaru also added a Grip Control function to improve stability on rough roads. The powertrain further adopts a new system that drives the front and rear wheels with separate motors, the Japanese carmaker said.

Subaru says its first serious EV rides on an e-Subaru Global Platform that delivers great driving dynamics and stability as well as a low center of gravity. It also offers outstanding structural rigidity for the safety of the human occupants as well as the lithium ion battery under the floorboards. In the bZ4X, Toyota calls the platform the e-Toyota New Global Architecture.

The Solterra’s overall dimensions are essentially the same as those of the bZ4X, which approximates the size of the Toyota RAV4 compact crossover. And like the bZ4X, the Solterra will come in two layouts: front-wheel drive and awd. In Japan at least, both variants get a 71.4-kilowatt-hour lithium ion battery.

Subaru did not say what testing regime was used, but the Solterra’s range figures align closely with those announced for the bZ4X. Toyota’s figures are based on the Worldwide Harmonized Light Vehicles Test Cycle, considered more lenient than the U.S. standard set by the EPA.

The Solterra’s interior reflects the more high-tech ambience reached for in the bZ4X. The steering wheel is low, with the instrument panel recessed from the driver. A massive upright digital display dominates the dashboard.

In keeping with the Subaru brand’s woodsy aura, the company is pitching its battery-electric vehicle as a safe yet rugged option that fits with the rest of the awd lineup.

“By filling it with new values that a BEV can offer and the value of ‘enjoyment and peace of mind’ that Subaru has cultivated over many years,” Subaru said, “Solterra has been built as an authentic SUV in an environmentally friendly package that can be used with peace of mind like the existing Subaru SUV models.”

Toyota Motor Corp. owns a 20 percent stake in Subaru Corp., and the companies have partnered on niche cars such as the 86/BRZ sporty coupe and other projects. But so far, Subaru has been slow to commit to the age of electrification. Its hybrid vehicles register mostly modest sales.

But Subaru plans to derive 40 percent of its global sales from electrified vehicles by 2030. That will require a dramatic ramp-up, and Subaru plans to lean on its recently announced engineering center, as well as Toyota, for help.