Scientists have identified regions of the human genome that regulate the speed of brain aging, according to an NIA-funded study published in Nature Neuroscience. The 15 genomic loci, which are specific locations on the chromosome (similar to a GPS address), either accelerate or slow down brain aging. This finding could help identify future drug targets for Alzheimer’s disease and related dementias, among other conditions. 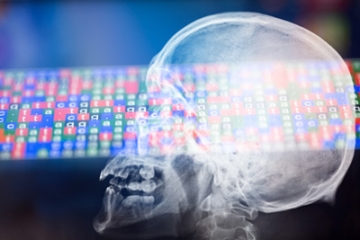 Brain regions change and grow differently across the human lifespan, with faster development often seen during childhood and atrophy (the loss of brain cells) seen more commonly in older age. Genetic and environmental factors influence these brain structure changes that vary greatly from person to person and can affect cognitive function and the risk for neurological diseases and psychiatric disorders.

For this study, a global team of more than 200 scientists who are part of the Enhancing NeuroImaging Genetics through Meta-Analysis (ENIGMA) Consortium, which is led by the University of Southern California, looked worldwide for people whose brains had been scanned twice with MRI. By examining brain scan data from 15,640 volunteers, the researchers could determine baseline measures of how fast tissue in brain regions crucial for memory, thinking, and emotions were growing or shrinking over time.

Next, the team cross-referenced brain-tissue change rates with approximately 1 million markers in their genomes. They used this data to create a heat map that identified 15 genomic loci or “hot spots” on the chromosome where a particular DNA pattern or gene affected the speed of brain changes. The APOE gene, known to increase the risk for Alzheimer’s and related dementias, was one spot that popped up in the analysis as a factor accelerating tissue decline in the hippocampus and amygdala brain regions, which are commonly damaged by Alzheimer’s.

Various other genes affecting brain growth or shrinkage were flagged, with some having a more significant impact in childhood and others more pronounced in adult brains. There was overlap in some of the identified loci, which were associated with a broad array of health factors, including cognitive function, depression, schizophrenia, insomnia, height, body mass index, and smoking.

The researchers also found that several gene sets that interacted with tau protein were associated with brain change rates. The abnormal buildup of tau protein is a common pathology of Alzheimer’s and is also associated with Down syndrome and amyotrophic lateral sclerosis. The scientists see this as evidence of the connection of these genes to neurodegeneration and aging.

The team believes these findings may guide future studies in the intersection of aging, brain development, and the prevention of brain disorders. They plan to follow up this study with further exploration of how genomic blueprints influence brain structure changes across the human lifespan.

These activities relate to NIA’s AD+ADRD Research Implementation Milestone 2.C, “Create research programs on epigenetics to understand how genetic and environmental factors interact across the lifespan to influence brain aging and risk for disease and to identify potential targets for treatment and prevention.”