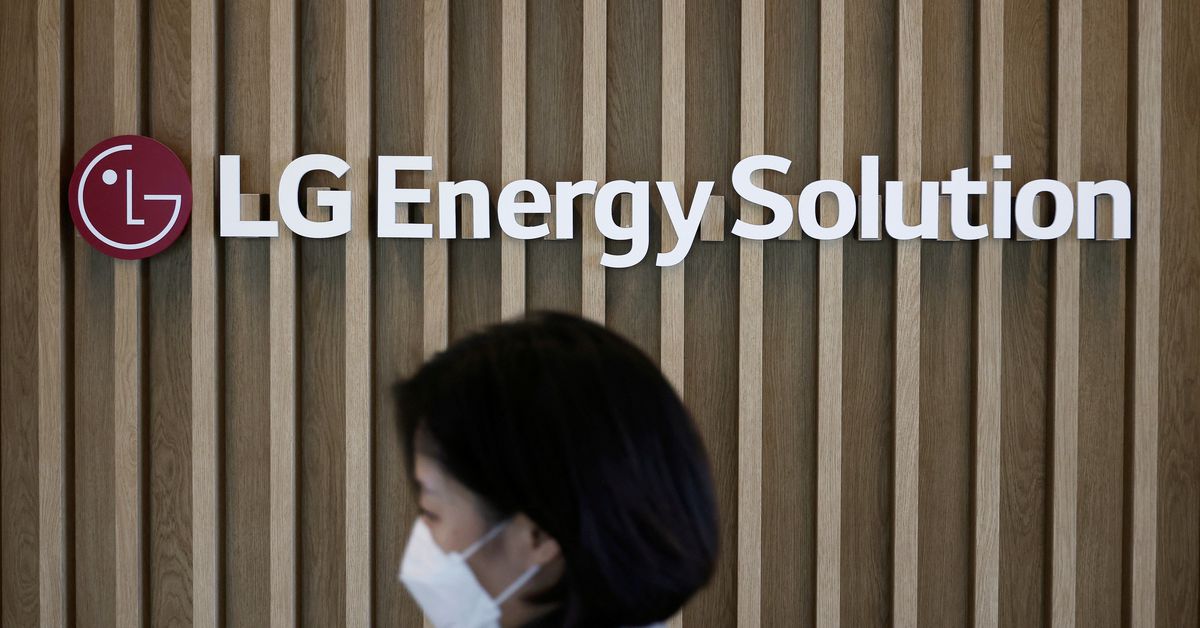 An employee walks past the logo of LG Energy Solution at its office building in Seoul, South Korea, Nov. 23, 2021. REUTERS/Kim Hong-Ji/File Photo

SEOUL, July 27 (Reuters) – Tesla supplier LG Energy Solution Ltd (LGES) (373220.KS) said on Wednesday it was looking at sites in Europe for a new battery plant and would ramp up production in Asia outside of China, where COVID lockdowns and rising costs were weighing on profits.

The company did not say how much it planned to invest in the new European plant, or give a timeframe for construction.

LGES added that it would use its Asia production sites outside of South Korea and China, such as its battery joint venture with Hyundai Motor Co (005380.KS) in Indonesia, to better respond to customer demand.

“With the easing chip shortage and auto customers’ plans to launch new models as well as solid EV demand among customers, we expect solid demand for pouch and cylindrical EV batteries in the second half of this year,” Chief Financial Officer Lee Chang Sil said in a post-earnings conference call.

Still, some analysts said it would take another year for premium EV sales to slow and have an impact on battery sales because supplies were tight due to pent-up demand.

LGES said it aims to expand joint ventures for pouch and cylindrical batteries for strategic customers and EV startups in North America.

It said it was reviewing a 1.7 trillion won ($1.29 billion) investment in a cylindrical cell plant in Arizona and would issue a statement on the matter in three months. There was no change in customer demand, but extreme inflation plus rising logistics and building costs prompted it in June to delay construction. It had said in March it would begin production in the second quarter. read more

LGES said it plans to start selling lithium iron phosphate (LFP) batteries manufactured in its China plant in 2023 and add a new LFP battery production line at its factory in Michigan in 2024 to meet demand in North America.

LGES raised its revenue outlook for the full year to 22 trillion won from 19.2 trillion won, and above the 20.9 trillion won average of 30 analyst estimates compiled by Refinitiv.

For April-June, revenue fell 1.2% from the same period a year earlier to 5.1 trillion won.

Sales to Tesla suffered during the quarter as the U.S. automaker paused production at its Shanghai factory in March and April due to COVID-19 lockdowns.

Analysts expect profitability to recover in the second half of the year as LGES renegotiates terms with customers and passes on higher raw material costs.

Operating profit dropped to 196 billion won for April-June from 724 billion won a year earlier, when LGES booked a one-time gain from a settlement with domestic rival SK On.

The result compared with the 199 billion won average of 21 analyst estimates according to Refinitiv SmartEstimate.

The battery maker’s share price fell as much as 3% on Wednesday after a six-month post-listing lock-up on the sale of its shares expired.