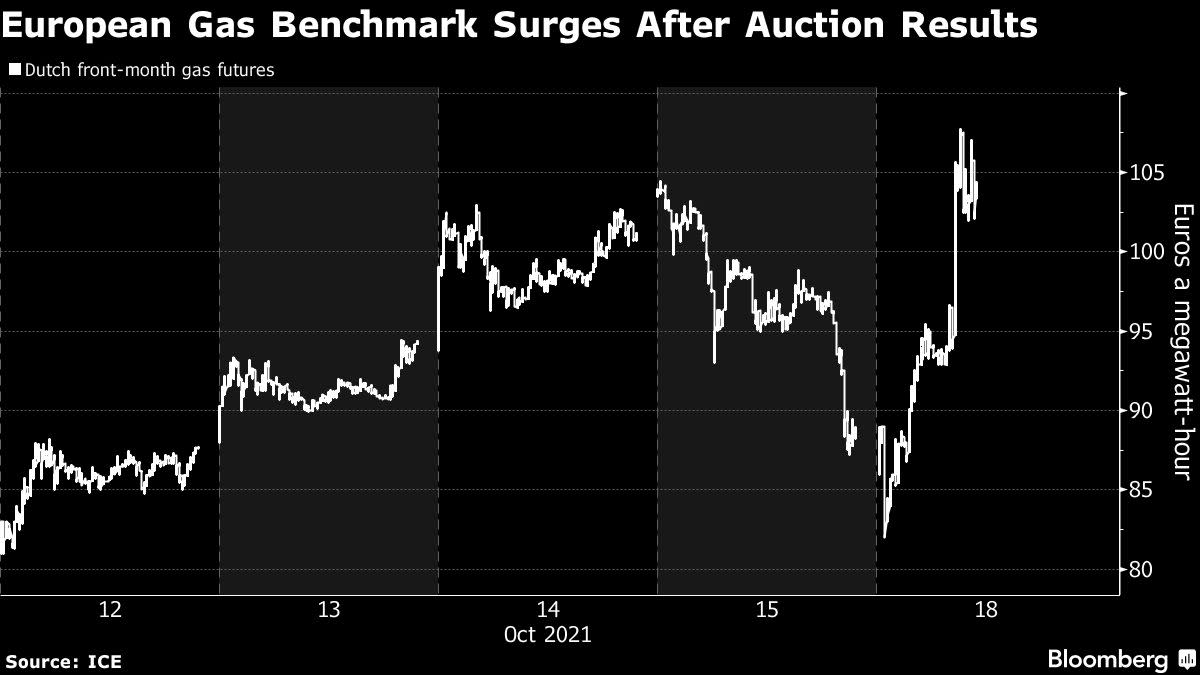 (Bloomberg) — Russia is keeping a tight grip on Europe’s energy market, opting against sending more natural gas to the continent even after President Vladimir Putin said he was prepared to boost supplies.

Gazprom PJSC’s exports to its main markets fell in the first two weeks of October to the lowest since at least 2014 for the time of year, as domestic demand absorbed most of the production gains. The results of auctions for pipeline capacity in November gave no indication that Russia is planning to boost shipments to Europe.

The cap on supplies remains in place despite Putin’s insistence last week that the country is “prepared to discuss any additional steps” to stabilize energy markets. Soaring energy costs are already prompting companies from chemicals giant BASF SE to fertilizer producers Yara International ASA and CF Industries Holdings Inc. to cut output. Extra Russian gas is seen as the only way to avoid an even deeper supply crunch in the middle of the winter.

Europe isn’t the only region suffering from the energy crunch. China’s commodities output plunged in September as power rationing and carbon controls reduced operations from metals smelters to oil refiners.

It will continue to send only limited volumes via Poland to Germany. Traders booked only 35% of the gas capacity offered for November at the Mallnow compressor station, where Russia’s Yamal-Europe pipeline ends. That’s similar to levels this month.

While Gazprom still has the option to book capacity on a daily basis in November, it hasn’t yet done so this month. Russia has repeatedly stated it needs to fill domestic storage sites before boosting exports.

Separately, the company published preliminary operational data showing it exported an average of 427 million cubic meters of gas a day so far this month to its key markets, which include Europe, Turkey and China. The daily volumes were some 12% lower that last month’s average, according to Bloomberg calculations based on the figures.

Gazprom continues to boost its total gas production to feed higher domestic demand, with output averaging 1.42 billion cubic meters a day so far in October. That’s up nearly 5% compared to the same period last year, and 4% higher than average for September, according to Bloomberg calculations.

European gas futures on the Dutch Title Transfer Facility hub jumped as much as 15%, after dropping 8.3% on Friday.

Europe is starting the heating season with the lowest gas inventories in more than a decade, stoking concerns about the reliability of winter supplies. Storage sites switched to net withdrawals last week, but mild temperatures this week are giving some respite, with stockpiles edging higher again.