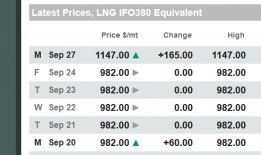 LNG bunkers per metric tonne moved over the $1,000 mark this week with a gain of over $150 pmt for the LNG IFO380 equivalent in Rotterdam.

High gas prices are visible across all industrial sectors with strong Chinese demand cited by commentators as providing the context for the rise.

For shipping, boxship publication The Loadstar reports that ships able switch from LNG to fuel oil are doing so as the latter fuel becomes more competitive

One carrier source was quoted by the publication as saying that his company was “not unduly concerned” by the LNG price spike, given that the ships on order were designed as dual-fuelled and could be run on low-sulphur fuel oil.