The scientific community has traditionally associated aspects of biomedical research findings in animal models, such as lab mice, with humans. But that is not the case with fasting blood glucose levels, a common metabolic test, according to new research led by NIA scientists. The results were published in Cell Metabolism. 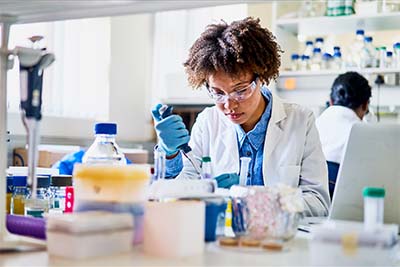 One obstacle in this translational puzzle is the lack of long-term mouse population research that can be directly compared to human aging studies of health and disease. To address this challenge, the NIA team developed the first mouse longitudinal cohort study to examine common metrics of aging across the entire lifespan, known as the Study of Longitudinal Aging in Mice (SLAM).

Aging naturally can lead to significant changes in weight, body fat percentage, and glucose metabolism in humans. Translating these metabolic shifts from animal models to humans has been imperfect at best. This has slowed progress in developing and testing potential interventions to delay the onset of metabolic problems and help promote healthy aging and longevity.

This study explored several measures of metabolism shared in previous and ongoing research by NIA-supported scientists at The Jackson Laboratory, University of Wisconsin, and Indiana University using animal models (in those cases mice and nonhuman primates) and human studies. The investigators for this new research tracked body composition, fasting glucose, and body weight, along with related mortality rates, to compare differences and similarities across species. In addition to SLAM and primate data, the team looked at participant data from the NIA-supported Baltimore Longitudinal Study of Aging (BLSA), the nation’s longest continual study of human aging.

In all three species, body fat percentage usually increases steadily up until around age 70, then begins to decline. Humans tend to have progressive increases in fasting blood glucose levels with age, even if they do not develop type 2 diabetes. Similar patterns were found in nonhuman primates.

But when it came to the SLAM mice, very different patterns were found for blood glucose. The research team was intrigued to find that the mice’s blood glucose levels stayed relatively stable across the middle of their lifespans, and then decreased as they grew older. Mice with high levels of glucose later in life tended to live longer, the opposite trend from humans and nonhuman primates, who tend to live longer when they have lower glucose levels.

The research team views these results as a new and important finding for aging research using common animal models and as a cautionary tale when translating age-associated metabolic trends from mice to humans. They hope this new finding can inform future studies using mouse models to develop metabolic and glucose regulation drugs aimed at older adult humans. In other words, drugs that are meant to correct elevated blood glucose for humans would not translate well for mouse studies of efficacy and safety. Conversely, drugs that lower glucose in mice may not extend their healthy lifespan but could still be worth pursuing in studies in nonhuman primates and eventually humans.