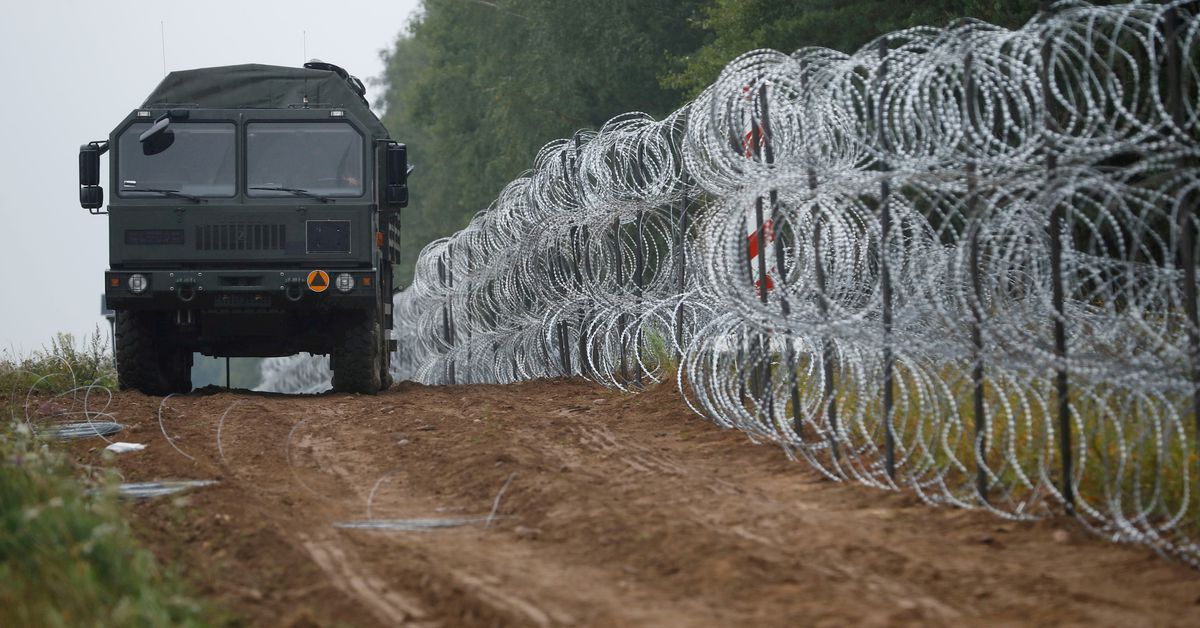 A view of a vehicle next to a fence built by Polish soldiers on the border between Poland and Belarus near the village of Nomiki, Poland August 26, 2021. REUTERS/Kacper Pempel

WARSAW, Oct 4 (Reuters) – Poland plans to strengthen its border with a system of motion sensors and cameras, modelling it on the Greek border with Turkey, its interior minister said in comments published on Monday, as it faces a large migrant influx from Belarus.

In August, Poland began building a barbed wire fence along its border with Belarus to curb illegal border crossings despite criticism that some migrants were being treated inhumanely. The new additions would strengthen border control as part of a permanent barrier.

“We are building a perimeter – a system of motion sensors with thermal cameras – that immediately and precisely show where people are gathering,” Poland’s Interior Minister Mariusz Kaminski said in an interview with Polish right-wing magazine Sieci.

He added that a political decision had been made to ensure appropriate funding for the initiative and that the new border set up will be similar to that on the Greek-Turkish border, with inspiration also drawn from Hungary and Serbia.

Greece is trialing a high-tech, automated surveillance system on its land border with Turkey in the northeastern region of Evros that was completed in August and authorities expect will be in force at the end of the year. It includes cameras, drones, motion sensors and radar providing information to two border surveillance towers.

Poland, which is the European Union’s largest eastern member and has one of Europe’s biggest border guard services, has for some time sought to invest in new technology to better monitor the border.

It has faced criticism for what many NGOs call illegal pushbacks when it comes to migrants entering Poland from Belarus and for not providing adequate shelter and support for those already in Poland.

Hungary, which has also faced broad criticism over its treatment of migrants, uses a barrier – a fence of wire reinforced with steel – armed with heat sensors, cameras, floodlights and loudspeakers that blare in several languages.

The country was a leading crossing point for hundreds of thousands of people trekking into Europe at the height of the migrant crisis in 2015.

Reporting by Joanna Plucinska in Warsaw, Karolina Tagaris in Athens and Krisztina Than in Budapest, Editing by William Maclean