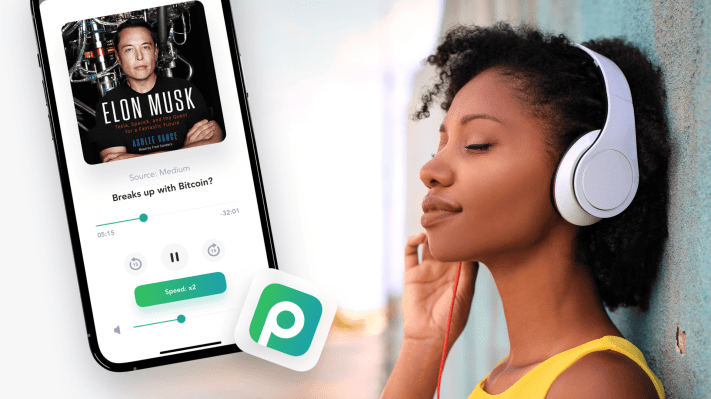 When you go into the App Store to download the Peech app, you’ll notice right away that the app’s icon displays the Ukrainian flag along with the company’s simple logo. But this is more than just a show of solidarity. With three Eastern European founders, the team behind this text-to-speech app has been harshly impacted by Russia’s invasion of Ukraine.

TechCrunch spoke to co-founder and CEO Andrey Poznyak via Zoom while he was in Poland, but he’s originally from Belarus. Pozynak was one of thousands of people who protested the results of Belarus’ 2020 presidential election. The twenty-year incumbent, often called “Europe’s last dictator,” once again consolidated power in a vote that the U.S. State Department deemed neither free nor fair.

“Afterward, there were quite a lot of protests, and after that, repression started,” Pozynak told TechCrunch. “I spent half a year in prison as a political prisoner.”

After getting out of prison in Belarus, Pozynak fled to Ukraine. But in the months leading up to Russia’s invasion, he had to relocate once again to Poland. Almost six million refugees like Pozynak have left Ukraine to find safety in other European countries.

Somehow, amid personal and political upheaval far beyond what most founders will ever experience, he built Peech, which just raised $550,000 in funding led by Flyer One Ventures. That’s no small feat.

Available in 50 languages, Peech is a text-to-speech app that actually sounds quite natural. Though it’s no replacement for quality human narration in an audiobook, Peech makes it easy to grab long web articles or documents and listen to them.

“Looking at my browser now, I have 30 tabs open — some of them, I didn’t read for a full year already, but I don’t want to lose them because the information is very useful,” said co-founder and CEO Andrey Poznyak, a 12-year veteran in tech management. Like many busy readers, he finds it easier to learn by listening to audiobooks or podcasts, since it’s more conducive to multitasking. “Normally, I do it when I’m on an evening run.”

Pozynak is right that consumers want a product to help them consume more written content via audio. Before I discovered how easy it is to borrow audiobooks from the library, I even tried to develop my own workaround to turn e-books from text to speech: I had my Amazon Echo Dot read books to me (the Echo was a gift, okay). This was a pretty bad solution, and it got even worse when I asked Alexa to read Jonathan Van Ness’ memoir. Once you’ve heard Alexa say “yas queen,” unfortunately you can never unhear it. But if I had the Peech app back then, I would have been spared from that psychic damage.

Poznyak said that Peech was able to make its text-to-speech output sound so natural through machine learning. Peech uses the open-source raw audio model WaveNet, which was created by DeepMind, a company acquired by Google in 2014.

“We have six or seven different machine learning models under the hood,” Poznyak told TechCrunch. He mentioned models from AWS, Google and Microsoft and noted that some of their models are engineered in-house.

As expected, the AI isn’t perfect, though — I read an article about a band playing “live music,” with “live” pronounced like “liver.” But if we keep reading more about music, the AI should begin to pick up on the nuances between these different words that are spelled the same way.

For about $3 a month, subscribers have unlimited access to the Peech app and can upload as many word documents, PDFs or links to articles as they want. You can also upload photos of book pages, which Peech can scan into text and read to you (a potential life-saver for students slogging through textbooks). This kind of app is also an asset to people with low-vision, dyslexia, or other conditions that make reading a challenge.

It could be a concern for Peech to see how publications will react to their articles being cross-populated if the app reaches a larger audience. It’s one thing to paste a URL of an article you already have access to, then use Peech’s technology to help you read it (in our usage, Peech hasn’t been successful at bypassing paywalls, which is a good thing for digital media companies). But Peech has an in-app discovery tool, which lets you listen to pre-uploaded articles from publications like The Guardian and Medium.

If it catches on, it’s not likely that these companies will take kindly to this, since listening to these articles in the Peech app means that the websites of origin don’t get the page views, which means less ad revenue, which means… it wouldn’t be shocking if Peech were to receive some cease and desist letters. Peech has also used TechCrunch’s logo (along with logos from Reuters, NBC and other outlets) in their promotional App Store photos without our consent.

Many large media companies like the New York Times have invested heavily in audio content, including narrated articles that are repurposed as podcasts. For Peech to be successful in the longterm (or, perhaps, acquired by a media company), they’ll need to be a bit more conscientious about how they engage with these publishers.

Still, if you love audiobooks or podcasts, Peech is worth a download.