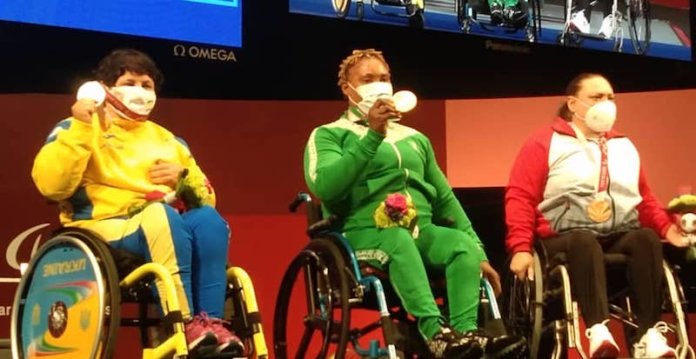 Competing in the -79kg category, Omolayo, proved too tough for her co-competitors, setting a new Games record of 141kg to claim the precious gold medal.

Ukraine’s Oliinyk Natalia who lifted 133kg settled for the silver while Muralova Vera of Russian Paralympic Committee got the consolatory bronze medal with 125kg lift.

Interestingly, Omolayo won the gold medal with her very first lift of 135kg which none of the other two Para-powerlifters could match with their first attempts.

According to reports from the Tokyo International Forum venue of the event, Omolayo’s closest rival, Muralova Vera of Russian Paralympic Committee went for 132kg which she also lifted well while Ukranian Oliinyk Natalia did 125kg.

To catch up with Omolayo, Murelova went for 136kg in her second attempt but failed.

Oliinyk chose to apply caution. She went successfully for 130kg and looking like content with a possible bronze medal finish, she merely added 3kg more to lift 133kg in her third attempt.

Seeing Murelova’s challenge, Omolayo increased the gap by entering 138kg in her second attempt and did it smoothly.

Omolayo with the biggest lift was not satisfied and proceeded to do 141kg in her third attempt which she did successfully to set a new Paralympic Games record.

The Nigerian further attempted to break the world record with a 144 booking but had a bad lift.

Murelova’s attempt to chase Omolayo however cost her the silver to settle in bronze as she ended with the 130kg in her first and only successful attempt.

Oliinyk who was more cautious and respectful of Omolayo’s superiority overtook her for the second place with the 133kg in her last attempt.

Speaking after the medal’s presentation, Omolayo said she was determined right from the training camp in Nigeria not to concede the gold to any opponent.

She however admitted been shaken by Innocent Nnamdi’s lose and Lucy Ejike’s drop to a bronze finish the day before her event.

“Winning the gold is exciting enough and doing so by setting a new Paralympic record is just great,” she quipped with excitement.

Team Captain, Lucy Ejike dropped down from gold medals at the last Games in Rio Brazil to settle for a bronze while, Olaitan Ibrahim also won a bronze in the women’s – 67kg category with 119 best lift.