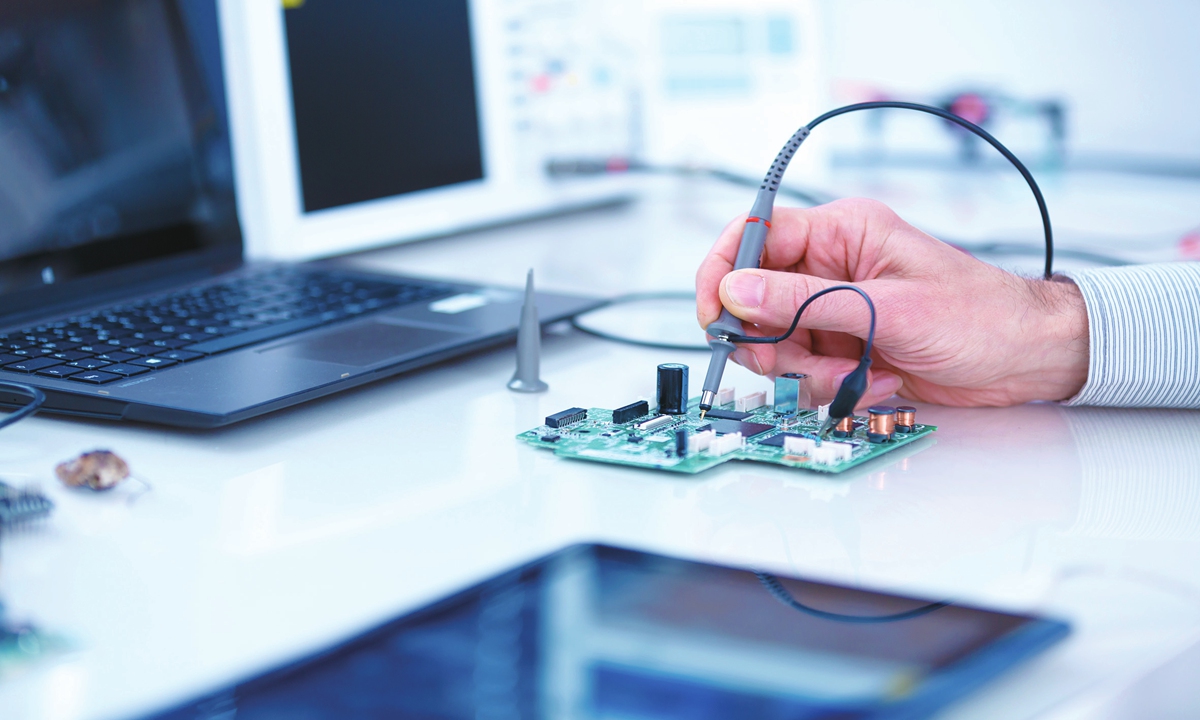 A researcher studies a microprocessor in a lab. Photo: VCG

The company provided details of new graphic chips (GPU) that will be at the core of AI infrastructure, releasing the H100 chip and a new processor chip called the Grace CPU Superchip, based on British chip firm Arm Ltd’s technology. It’s the first Arm-based chip from Nvidia to be unveiled since its deal to buy Arm fell apart last month.

Nvidia also announced its new supercomputer “Eos”, which it said will be the world’s fastest AI system when it begins operation later this year.

Nvidia said the new technologies together will help reduce computing times from weeks to days for some work involving training AI models.

Companies have been using AI and machine learning for a multitude of things – from making recommendations for the next video to watch on TVs and cell phones – to new drug discovery.

“It’s clear from the latest announcements that Nvidia is becoming a more significant threat to Intel and AMD in the data center and cloud computing markets,” said Bob O’Donnell chief analyst at TECHnalysis Research.

Intel Corp has been the biggest maker of central processors for data centers, but has seen competition for the lucrative fast growing space rise.

However, Vlad Galabov, head of the cloud and data center research practice at research firm Omdia said he has concerns about the H100 chip’s power consumption and said that it might inhibit the processor’s broad market appeal.

Nvidia’s Chief Financial Officer Colette Kress said that with the new chips pushing AI computing forward, the company’s market opportunity was about a trillion dollars, from gaming to chips and systems, and enterprise businesses.

Nvidia, whose open-source software has been a key driver for companies to use its chips, said it was looking to monetize on its software business even more in the future.

“Already we have been selling software to our enterprises and this is a couple hundred million dollars today and we believe this is a growth opportunity for us,” Kress said, adding that going forward the software business will help Nvidia’s gross margins improve at a time when chip component shortages and supply constraints have increased costs.

Software for the automotive market will also be a key driver forward, said Huang. “Auto is on its way to be our next multi-billion-dollar business,” he said.

Danny Shapiro, Nvidia’s vice president for automotive, said there was $11 billion worth of automotive business in the “pipeline” in the next six years, up from $8 billion that it forecast last year. The growth in anticipated revenue will come from hardware and from increased, recurring revenue from Nvidia software, said Shapiro.