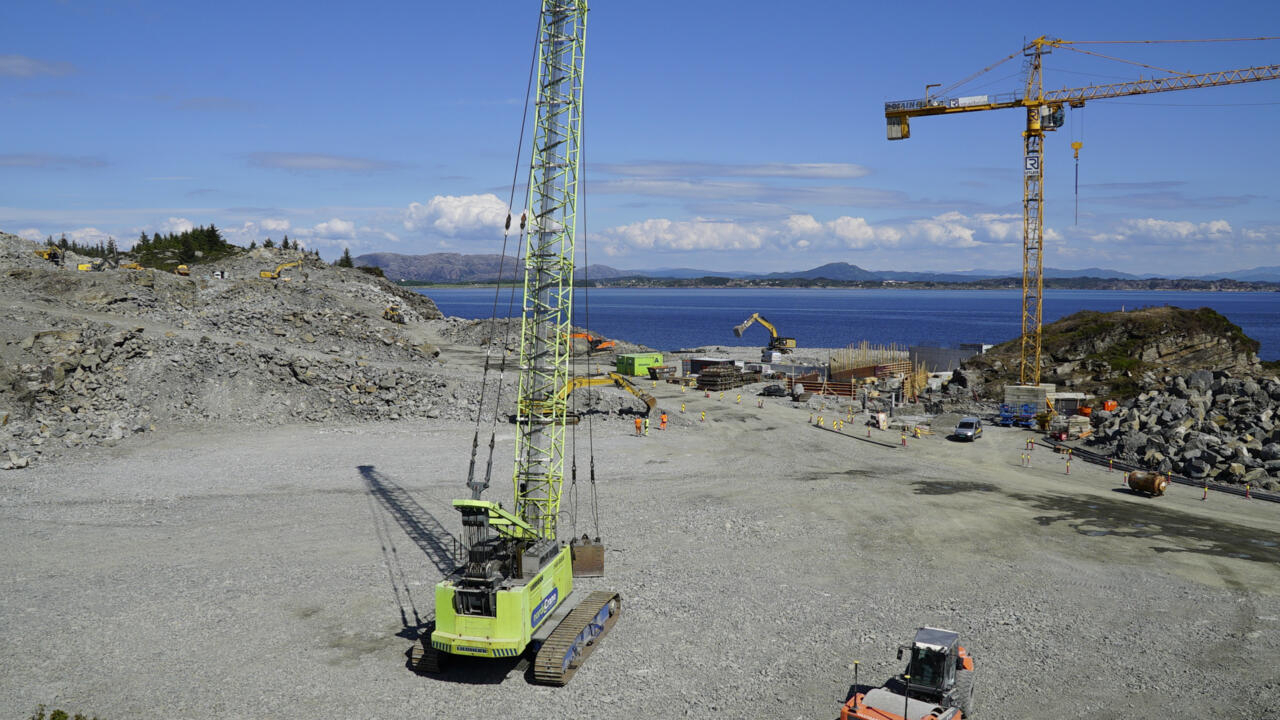 Oygarden (Norway) (AFP) – On the shores of an island off Norway’s North Sea coast, engineers are building a burial ground for unwanted greenhouse gas.

The future terminal is to pump tonnes of liquefied carbon dioxide captured from the top of factory chimneys across Europe into cavities deep below the seabed.

The project in the western municipality of Oygarden aims to prevent the gas from entering the atmosphere and contributing to global warming.

It “is the world’s first open-access transport and storage infrastructure, allowing any emitter that has captured his CO2 emissions to deliver that CO2 for safe handling, transport and then permanent storage,” project manager Sverre Overa told AFP.

As the planet struggles to meet its climate targets, some climate experts see the technique, called carbon capture and storage, or CCS, as a means to partially reduce emissions from fossil-fuel-based industries.

Norway is the biggest hydrocarbon producer in Western Europe, but it also boasts the best CO2 storage prospects on the continent, especially in its depleted North Sea oil fields.

The government has financed 80 percent of the infrastructure, putting 1.7 billion euros ($1.7 billion) on the table as part of a wider state plan to develop the technology.

A cement factory and a waste-to-energy plant in the Oslo region are set to send their CO2 to the site.

But the most original feature of the project is on the commercial side: inviting foreign firms to send their CO2 pollution to be buried out of harm’s way.

Using CCS to curb carbon pollution is not a new idea, but despite generous subsidies the technology has never taken off, mainly because it is so costly.

One of the world’s largest carbon capture facilities, at the Petra Nova coal-fired plant in Texas, was mothballed in 2020 because it was not economical.

There are only a couple of dozen operational CCS projects around the world, according to the industry-run Global CCS Institute.

But the failure to reduce greenhouse gas emissions in line with Paris Agreement goals and a massive influx of government subsidies have breathed new life into the technology.

Energy giants Equinor, TotalEnergies and Shell have set up a partnership — dubbed Northern Lights — which will be the world’s first cross-border CO2 transport and storage service at its scheduled launch in 2024.

A pipeline will inject the liquefied CO2 into geological pockets 2,600 metres below the ocean floor, and the idea is that it will remain there for good.

From 2025, it is to ensure 800,000 tonnes of CO2 are captured each year at a plant in the Netherlands owned by Norwegian fertiliser manufacturer Yara, then shipped to Oygarden and stored there.

If confirmed, the partnership between Equinor and Wintershall Dea could involve building a 900-kilometre (560-mile) pipeline connecting a CO2 collection facility in northern Germany with storage sites in Norway by 2032.

A similar project with Belgium is already in the works.

Not a ‘proper solution’

In its first phase, the Northern Lights scheme will be able to process 1.5 million tonnes of CO2 per year, then later between five and six million tonnes.

But that is just a tiny fraction of annual carbon emissions across Europe.

The European Union emitted 3.7 billion tonnes of greenhouse gases in 2020, according to the European Environment Agency.

Many climate experts warn carbon capture is no silver bullet for the climate crisis.

Critics caution that CCS could prolong fossil fuel extraction just as the world is trying to turn toward clean and renewable energy.

“In the beginning it was very easy to oppose all kinds of CCS (carbon capture and storage) and now because of the lack of climate action it’s of course a more difficult debate to be in,” he said.

“This money should instead be spent on developing (a) proper solution that we know (works) and that could reduce the electricity bills for regular people, such as insulating homes or solar panels”.