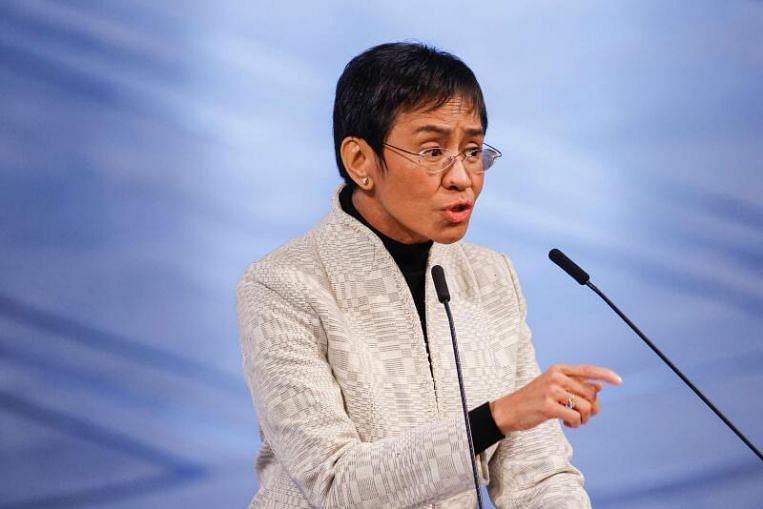 Ms Ressa, the co-founder of news website Rappler who won this year’s prize together with Russian journalist Dmitry Muratov, attacked the technology industry which “has allowed a virus of lies to infect each of us, pitting us against each other, bringing out our fears, anger and hate, and setting the stage for the rise of authoritarians and dictators around the world”.

“Our greatest need today is to transform that hate and violence, the toxic sludge that is coursing through our information ecosystem, prioritised by American Internet companies that make more money by spreading that hate and triggering the worst in us,” she said.

She said facts and truth were at the heart of solving the biggest challenges facing society today.

Ms Ressa, whose website is highly critical of Philippines President Rodrigo Duterte, is the subject of seven lawsuits in her country that she says risk putting her in jail for 100 years.

Currently on parole, pending an appeal after being convicted of defamation last year, she needed to ask four courts for permission to travel and collect her Nobel prize in person.

Fellow laureate Muratov said on Friday that people in positions of power in Russia are actively promoting the idea of war, and conflict with Ukraine is now a distinct possibility.

Receiving his award at Oslo City Hall, Mr Muratov said that in Russia, it was common to think that politicians who avoided bloodshed were weak, while threatening the world with war was “the duty of true patriots”.

Mr Muratov, editor-in-chief of Russian newspaper Novaya Gazeta, won the award jointly with Ms Ressa in recognition of their fight for freedom of expression.

“The powerful actively promote the idea of war,” he said. “Moreover, in (the) heads of some crazy geopoliticians, a war between Russia and Ukraine is not something impossible any longer.”

US officials have said Russia could soon invade Ukraine following a build-up of troops near the Ukrainian border. Moscow has denied it is planning an invasion.

Mr Muratov also said journalism in Russia was going “through a dark valley”, with more than a hundred journalists, media outlets, human rights defenders and non-governmental organisations having been branded as “foreign agents”.

“In Russia, this means “enemies of the people,” said Mr Muratov, dedicating his prize to “the entire community of investigative journalists” and his colleagues at Novaya Gazeta who lost their lives.

They include Anna Politkovskaya, gunned down in her apartment building in Moscow 15 years ago after angering the Kremlin with dispatches from the war in Chechnya.