Explaining the success of “Top Gun: Maverick” isn’t tough. All that’s required is having some inkling of what we the people enjoy. We adore watching Tom Cruise in action flicks, for one thing, proven by his long track record of bankability.

Fast vehicles are high on our list of likes, too. Put Tom Cruise’s Navy Captain Pete “Maverick” Mitchell inside a fighter jet, show him exercising his need for speed through challenging terrain, and guess what? People will plunk down money to see that on as large of a screen as possible.

But do you know what Americans really love? Balls. That affair transcends political affiliation and tribalism. The angry red balls in need of scientifically proven medication tend to get the most attention, but let’s not count out our frustrated blue balls and the tricky, harder-to-pin-down purple ones. They’re out there too, ready to bounce off their couches and into theaters.

Everyone’s feeling a little deflated these days, and Cruise and “Top Gun: Maverick” director Joseph Kosinski know this. Who can forget the 1986 original when a 25-year-old Cruise and his co-star Val Kilmer, each in their oiled-up prime, took to the beach to flex and play . . . what was it? Volleyball? Honestly, I wasn’t paying much attention to the sport part.

This time around there’s a female ace pilot in the mix, Lt. Natasha “Phoenix” Trace (Monica Barbaro), and the game is touch football. Cruise’s Maverick, their instructor, envisions the game as having a purpose beyond posturing. It’s about team building, he explains to his short-tempered boss Vice Admiral Beau “Cyclone” Simpson (Jon Hamm).

Sure enough, the younger guns all learn to pass the ball, defend the ball, and have fun with the ball.

But the audience knows the teamwork exercise isn’t the reason the “Top Gun” sequel includes this scene. Its secondary purpose, the one that rings truer, is to remind us yet again that 59-year-old Cruise is still as ripped as his decades-younger co-stars.

Those who can, do. As for those who can’t, forget it. Maverick isn’t the type.

That takes stones – along with, I’m guessing, many hours of physical effort guided by the best personal trainers in the world, a strict diet, and a supplement regimen that may or may not include alien stem cells.  Any mortal may follow that plan and still lack the fortitude to show their vintage pecs to the sun.

Not Tom Cruise. Maverick’s got it like that. Those who can, do. As for those who can’t, forget it. Maverick isn’t the type. The younger pilots may be elite, but it’s understood that the chiseled veteran is going to run the ball into the end zone.

No wonder the right-wing is lurching to claim the box office record-breaking success of “Top Gun: Maverick” as a tribute, they say, to “anti-wokeness.” Several Fox News hosts crowed about this in the days following the movie’s release, echoing Breitbart column headlines. Meghan McCain was the last to jump on the wagon with her Wednesday column in that All-American news rag, The Daily Mail. “Hollywood must wake up to the reality that ‘go woke, go broke’ is real,” she wrote.

The Arizona sage went on to praise “Top Gun: Maverick” for having all the qualities of the typical summertime blockbuster. “The movie isn’t overly political, it isn’t depressing, it isn’t focusing on the flaws of the United States of America and why we suck and why our flag and national anthem aren’t worth honoring.”

Well, duh. Cruise isn’t remaking “Born on the Fourth of July.” Clearly this movie is not that one.

Besides, none of the three highest-grossing movies of 2022 – “Doctor Strange in the Multiverse of Madness,” “The Batman” and “Spider-Man: No Way Home” – gripes about America’s flaws or disrespects the flag. Why on Earth would they?

However, “Top Gun: Maverick” does something those films don’t, in that it comforts a demographic that may harbor grave concerns about its impending obsolescence, its waning influence, and declining potency.

In short, this movie validates the viability of old balls of every size and sort, from raisins to apricots.

Paramount’s own demographics breakdown backs this up. It indicates that 55% of the opening weekend’s audience was over the age of 35. We’re talking elder Millennials, Generation Xers, and Boomers – many of whom watched the original “Top Gun” back in the ’80s and may be feeling the 36 years that have transpired since. 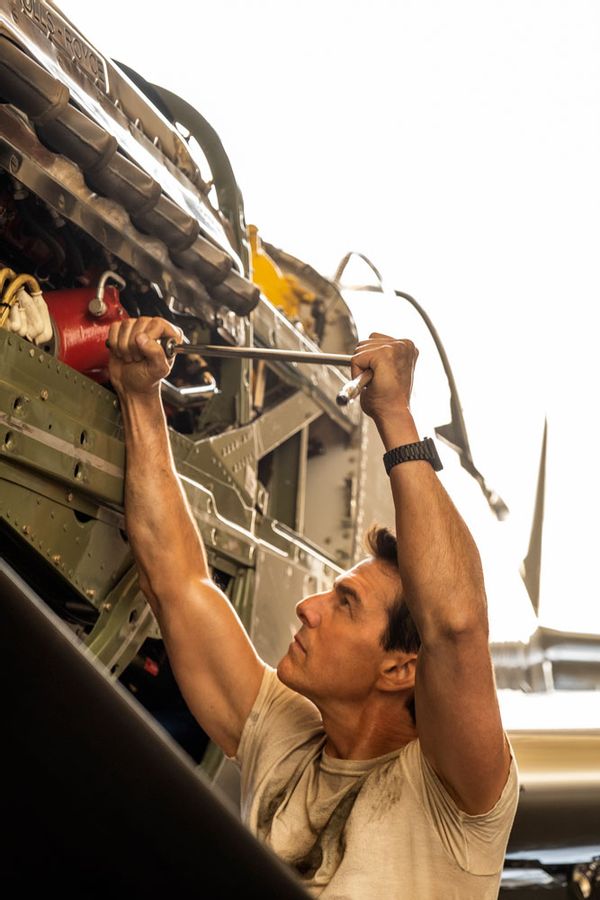 Tom Cruise plays Capt. Pete “Maverick” Mitchell in “Top Gun: Maverick” (Paramount Pictures / Skydance / Jerry Bruckheimer Films)“Top Gun: Maverick” was made for that crowd even as it bridges generational gaps by emphasizing spectacle over any message, and certainly none deeper than, “Look at Tom Cruise, still keepin’ it tight.”

For emotional flavor it tosses in some father-son healing between Maverick’s father figure and his surrogate child Lt. Bradley “Rooster” Bradshaw (Miles Teller), the son of his dead best friend Goose, by way of  a “Behind Enemy Lines” fly-by.

But the main hooks are the roaring flight sequences that vibrate the theater’s walls, with visuals reminiscent of Death Star’s trench in “Star Wars Episode IV: A New Hope,” only brought to life by scenes filmed in F/A-18s flown by top pilots.

Long before all of that kicks in, though, we see Maverick being cut down to size by Ed Harris’ leathery Rear Admiral Chester “Hammer” Cain, who is keen to replace the likes of our hero with drone technology. “The future is coming, and you’re not in it,” he growls before adding, “The end is inevitable, Maverick. Your kind is headed for extinction!”

Once you understand that part of the equation, you may get why conservatives are desperate to claim this as their movie.

To that portion of the audience, “Top Gun: Maverick” is a two-hour, 11-minute Cialis ad, starring a guy with flexible hips who can still climb a ladder to clean his own roof gutters.

Maverick represents that aging audience’s ideal self. He blasts down the road on his All-American Kawasaki motorcycle, refusing to wear a helmet or play by the rules. His motto is, “Don’t think, just do.” His three-and-a-half decades-long friendship with Iceman, now known as four-star Admiral Tom “Iceman” Kazansky, ensures he’ll never suffer any consequences for, say, disobeying orders and destroying a prototype aircraft that’s probably worth the equivalent GDP of a small nation.

He teaches the next generation of the world’s best fighter pilots to fly a mission that he ends up leading anyway. Because the world needs Maverick. He’s that exceptional.

Is this evidence of intentional “anti-wokeness”? Not so fast. Consider that the sequel also introduces the local bar as a gathering place for men and women in uniform that’s run by Maverick’s love interest Penny Benjamin (Jennifer Connelly), the “Admiral’s daughter” Maverick got in trouble with way back when. 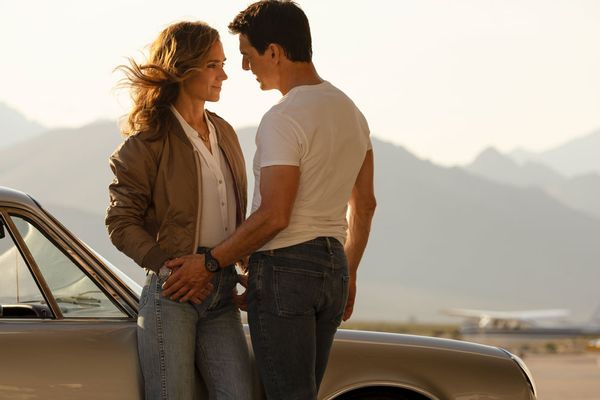 Jennifer Connelly plays Penny Benjamin and Tom Cruise plays Capt. Pete “Maverick” Mitchell in “Top Gun: Maverick” (Paramount Pictures / Skydance / Jerry Bruckheimer Films)In the 1986 flick, the first female presence is introduced by an anonymous actor’s thigh poking out from under her skirt. In 2022, a woman makes the bar’s rules and has the ovaries to get Maverick physically tossed from the place.

The candidate class also includes other non-white faces, a step up from the 1986 class, which includes two Black men, only one of whom had any lines . . . and was passed over for the final mission so Maverick could fly with a WSO from his old squad.

This doesn’t change what “Top Gun” or “Top Gun: Maverick” are at their core. The franchise was born in the middle of the Reagan era. Then, and now, it is a militaristic fantasy upholding the concept of white American exceptionalism. Even now, in Maverick’s inclusive team, non-white characters are flanking him, rooting for him, but none rise high enough to steal his spotlight.

Like before, the mission involves the Americans taking on faceless pilots flying ambiguously identified “fifth-generation aircraft” for an unidentified rogue nation. The target is conveniently in the middle of nowhere, far enough away from any urban centers to head off distracting moralizing about civilian deaths and other collateral damage.

It’s a story that very much wants to have it all ways, appealing to the broadest audience possible.

Want a daily wrap-up of all the news and commentary Salon has to offer? Subscribe to our morning newsletter, Crash Course.

But it’s been a rough couple of years, and everyone’s hungry for a bombastic summer flick that tickles the onions. Cruise and Kosinski target this low-key yearning by populating the movie with callbacks to the original “Top Gun,” knowing how much Gen X loves its Easter Eggs and nostalgia that reminds us of our youth.

This is why nobody was expecting the opening scene of “Top Gun: Maverick” to show the title character, say, doddering around his ailing daylily farm. Cruise has a few years ahead of him before he heads the way of “The Mule,” proven by the pre-movie teaser for his next great cinema conquest, 2023’s “Mission Impossible – Dead Reckoning Part One.”

He will be at least 60 when it comes out, and still holding the standard for refusing to age out of greatness. That fantasy doesn’t belong to any party or political tribe. Claiming otherwise is simply nuts.