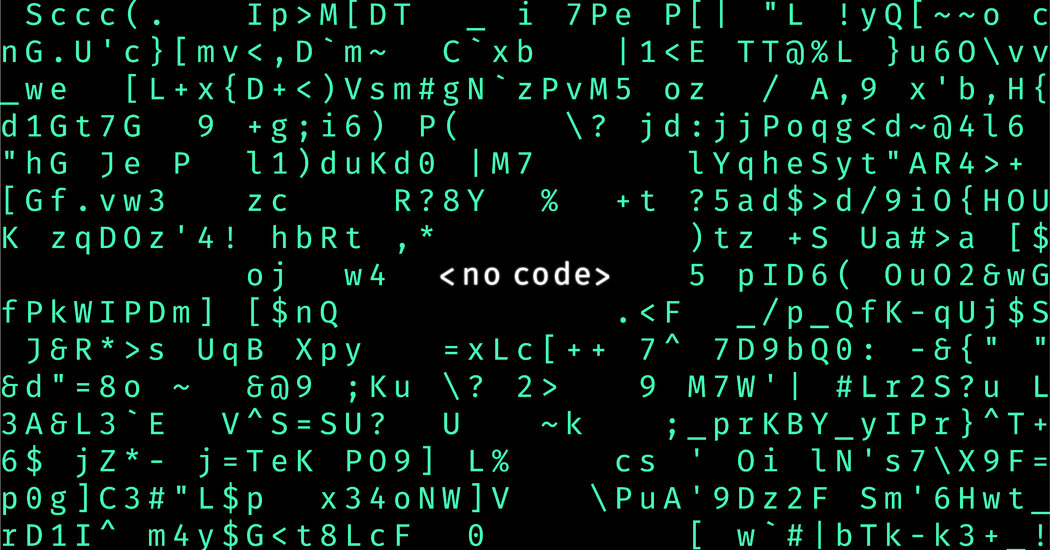 “I could say something like, ‘Look up all the customer records from the last year,’ and it will go do that for you automatically,” said Charles Lamanna, Microsoft’s corporate vice president of business apps and platforms. He estimates that half of all office work could be automated with A.I. if there were enough developers to do the work. “The only way to do this is to empower everybody to be a no-code developer.”

Eventually the broader public will be able to create A.I.-enabled software in much the same way that teenagers today can create sophisticated video effects that would have required a professional studio a decade or two ago.

For now, though, most no-code-A.I. users are business professionals who want to streamline the way things are done without having to involve a programmer.

Google’s AppSheet, for example, is an open platform where people can connect data and, with a single click, create apps that can be opened on a smartphone, tablet or computer. It uses A.I. to understand the intent of users and enables them to build mobile and desktop applications with integrated computer vision and predictive analytics features. It costs nothing to make apps for personal use.

“We’re focused on making this consumable by regular people,” said Praveen Seshadri, AppSheet’s co-founder and chief executive. There are many organizations around the world that have teams of people that need to coordinate schedules and tasks, he added. Each one is unique and more suited to building a custom app than trying to use something off the shelf.

As an example, he cited New Incentives, an organization that gives small amounts of cash to mothers in some of the poorest parts of Nigeria to encourage them to immunize their children. To track that data, they built an app with AppSheet that their employees now use in the field.

Alex Denning, who runs Ellipsis, a small marketing company for businesses that use WordPress, turned to Akkio to build an A.I. system that could predict which keyword and title would get his clients’ blog posts the most visibility on Google and other search engines. He dragged and dropped onto Akkio’s site a spreadsheet of past keywords and blog-post titles along with the number of clicks those posts got on Google. After a few keystrokes, Akkio created an A.I. to do the job.