Microsoft has confirmed that it is looking closely at implementing AMD’s FidelityFX Super Resolution (FSR) technology in applicable Xbox and Windows AAA games. However, this doesn’t mean that the firm hasn’t been, or will stop, pursuing its own upscaling technologies. This is evidenced by job vacancy listings posted by Microsoft at around the same time and after AMD’s big FSR reveal.

Job listings for a Principal Software Engineer for Graphics, and a Senior Software Engineer, provide some interesting insight into Microsoft’s plans. In addition to the usual reels of skills and qualifications Microsoft is looking for the descriptive part of the listing says that one of the main tasks of the ‘Principal’ position is to “ensure that all games run beautifully at the highest resolutions and frame rates”. The successful candidate will be working with graphics related technology and how it is applied alongside “DirectX API, graphics driver, Machine Learning, shader compiler, PIX tooling, or silicon feature development”. 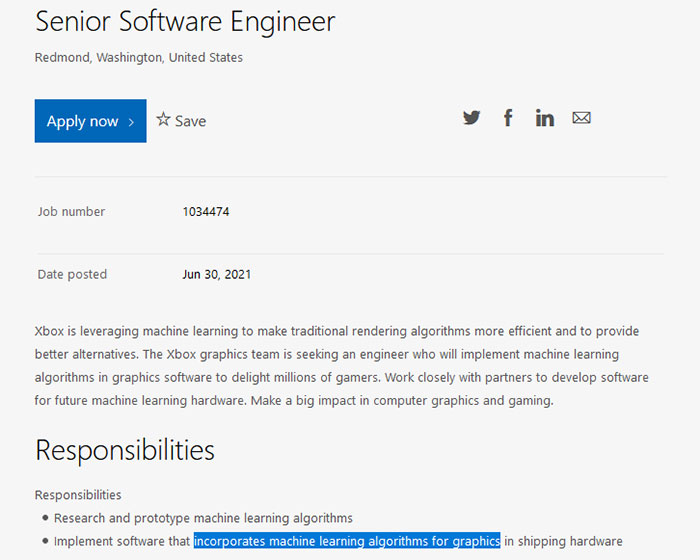 Additionally, the ‘Senior’ position holder will be expected to “implement machine learning algorithms in graphics software to delight millions of gamers,” strongly suggesting some kind of AI/ML upscaling tech is desired. This same employee will work closely with Microsoft’s hardware partners to “implement software that incorporates machine learning algorithms for graphics in shipping hardware”.

Of course, Microsoft’s current games console hardware partner is AMD, which just launched FSR. It is good to see that while FSR has been broadly welcomed and praised, Microsoft (and probably AMD) don’t see it as the ultimate solution for high performance graphics upscaling at great quality. Nvidia hasn’t stopped progressing with DLSS tweaks and revisions, either.

I wonder if some of this AI/ML technology is already being used by developer versions of Microsoft Flight Simulator, with its recently heralded update which can double frame rates. The game doesn’t use DX12 as yet, so it probably isn’t being accelerated by DirectML techniques.