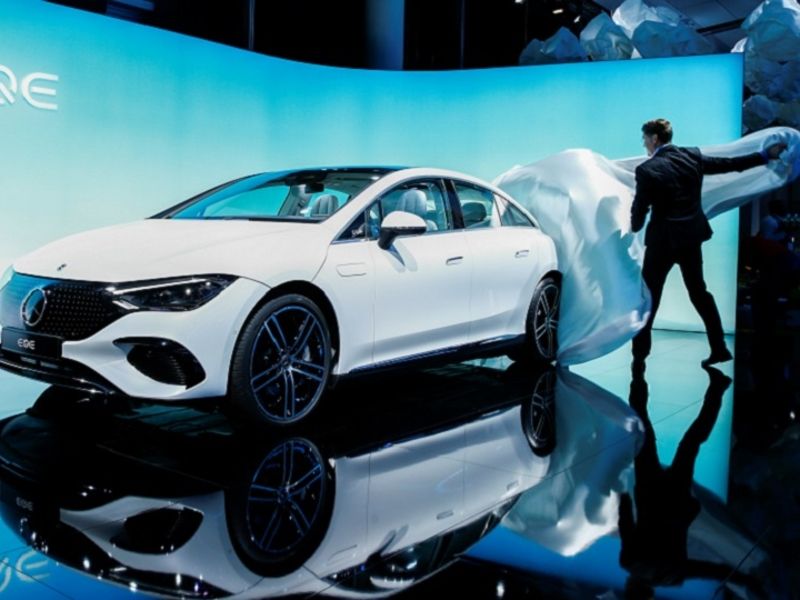 MUNICH — Mercedes is touting a long driving range and advanced connectivity features in its EQE full-electric car to win buyers in the key executive sedan segment.

The EQE’s driving range of 660 km (410 miles) under the WLTP test cycle means it is “absolutely suitable for touring,” Mercedes said in a statement ahead of the car’s public debut on Monday.

The EQE’s long range on a single charge will be the benchmark figure among competitors, Daimler CEO Ola Kallenius said on Sunday during a preview event ahead of the show.

“One in 10 Mercedes customers choose an electric option already, and I’m sure the EQE will win over more customers,” Kallenius said.

The EQE will launch with two variants, including the 288-hp EQE 350, Mercedes said. Details of the other model were not disclosed.

The sedan’s wheelbase is 90 mm shorter than the EQS at 3120 mm and in terms of external dimensions, it is comparable to the CLS, Mercedes said.

Giving the EQE a dedicated electric platform rather than converted combustion model underpinnings means the sedan has a long driving range and a roomier interior.

Kallenius said the EQE has an “exceptional” amount of room inside. Its interior length is 80-mm longer than the E-Class.

The four-link front suspension and multilink rear suspension of the EQE is also closely related in design to the EQS.

The EQE offers the MBUX Hyberscreen glass dashboard display as an option, from which drivers can activate the “Navigation with Electric Intelligence” feature. This selects the most efficient and fastest route with dynamically updating notifications.

The display area of the Hyperscreen, which sweeps from A pillar to A pillar and merges multiple displays under a curved glass surface, can be individualized in seven different modes.

Kallenius said the front seat passenger in Europe can watch a movie on their own on the display while they are traveling. This is an industry first, he said.

The display uses at camera to detect if the driver is looking at the front passenger display, automatically dimming content to prevent the driver from being distracted.

The vehicle comes equipped with several driver assistance systems, including a new microsleep warning, which analyses the driver’s eyelid movements using a camera in the driver display.

Additional options include rear-axle steering and an interactive driving sound package, which can react to a dozen different parameters, such as the position of the accelerator pedal, speed and recuperation.

“With the new EQE, we can quickly make the high-tech solutions of our EQS electric flagship available to a wider group of buyers,” Mercedes production chief Markus Schaefer said in the statement.

The EQE will compete with the Audi A6 e-tron and the upcoming electric version of BMW 5 Series. The sedan will be rolled out globally starting in the middle of next year.

The EQE will be built in Bremen, Germany, for global markets except China. The Chinese market will get EQEs built at Mercedes factory in Beijing.

Mercedes said the EQE is also one of the first vehicles to be built with steel from Salzgitter. The steel is 100 percent recycled, which reduces the CO2 emissions in rolled steel production by more than 60 percent.

The company’s new focus on sustainability continues with its stated guarantees that energy from renewable energy sources is fed into the grid for charging current sourced through its Mercedes me Charge network.

The network lets drivers charge their vehicles at more than 530,000 public charging stations around the world, with more than 200,000 of them located in Europe.