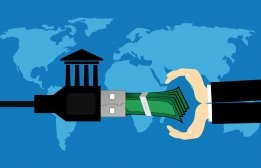 How the SWIFT ban will impact the trade in oil products remains unclear, market sources say.

The Brussels-based SWIFT, or the Society for Worldwide Interbank Financial Telecommunication, is a secure messaging system that makes rapid, cross-border payments possible.

Under sanctions imposed by western states, Russia has been removed from the system

According to market analyst Energy Aspects, the Russian ban means that trade in commodities is unlikely to continue unless there are exemptions, maritime news provider Tradewinds reports.

A bunker trader based in northwest Europe told Ship & Bunker that the situation on SWIFT and oil products was unclear.

But the trader added that in the near term, the question of whether Russian ships would be allowed to enter European ports was more pressing.

The UK government has banned Russian ships from making calls at UK ports.

Russia, which has its own bank messaging system (SPFS), exports much of its natural gas and crude oil to European markets.