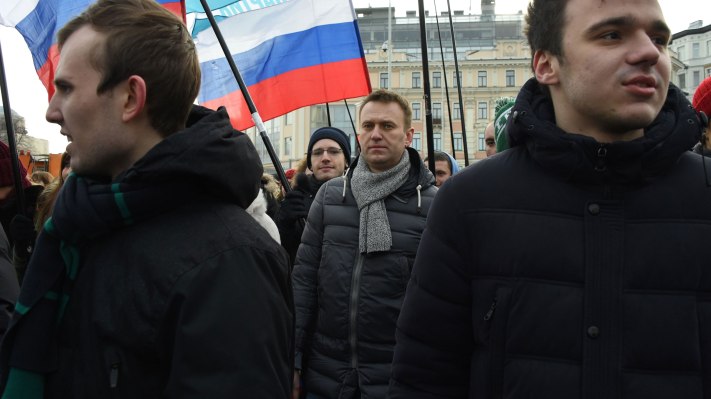 Jailed Kremlin critic Alexey Navalny has called on tech giants Google and Meta/Facebook to help circumvent Putin’s grip on the media and get information out to ordinary Russians about what’s actually going on in the war in Ukraine by allowing their ad targeting tools and platforms to be selective repurposed to run a nationwide ad campaign that shows the bloody reality of the Kremlin’s so-called “special military operation.”

It’s a fascinating — if highly unlikely — idea to try to work around draconian laws Putin’s regime has implemented, which mean Russian citizens are risking lengthy jail terms if they post anti-war comments themselves or even just like a social media post with an anti-war message.

There would, undoubtedly, be a certain symmetrical irony if Western ad targeting tools that the Kremlin routinely appropriates to spread its propaganda to try to attack the West got redirected and reversed into a firehose of truthful messaging targeted at Russian citizens to counter Kremlin propaganda. Albeit, allowing selective, one-way speech would likely just invite counter-criticism that the West was undermining its own commitment to free speech.

Another reason it’s unlikely is it would invite further retaliation on the tech platforms by the Kremlin, which — since invading Ukraine — has already blocked access to Facebook and Instagram, restricted access to Google News and levied a series of fines against YouTube.

Google and Meta also stopped selling ads inside Russia in the wake of the invasion. Although it’s less clear whether they have stopped accepting payment outside Russia for ads that are targeted inside the country — however Google, for one, has imposed what it calls a “global sensitive events” policy that blocks ads that are related to the Ukraine conflict and/or otherwise seek to take advantage of the situation.

So it’s likely Navalny’s suggestion would run directly counter to that — and be impossible without Google changing its policy. But that hasn’t stopped Putin’s bravest critic from making the ask.

In a lengthy tweet storm in Russian [translated using machine translation] laying out his thinking — and making a direct appeal to both Google and Meta and a number of Western political leaders — Navalny starts by describing this as “a thread about how to open a second front against the Kremlin war criminal.”

“The first thing to understand is that there is no 75% support for the war with Ukraine in Russia. This is a lie of the Kremlin,” he writes, suggesting that while there is widespread opposition Putin’s aggression among Russia citizens it is almost impossible for normal people to voice their opposition, given they face up to 15 years in jail for just using the word “war” — and later claiming: “Putin’s secret services now have no more important things to do than arrest people for likes under anti-war posts.”

Per the thread, even just standing in the street in Moscow with a copy of Tolstoy’s classic, “War and Peace,” got a man arrested recently.

“The fact is that the majority of Russian citizens have a completely distorted idea of what is happening in Ukraine,” writes Navalny. “For them, Putin is waging a small, very successful war with little bloodshed. Our military are heroes, and there are almost no casualties among them.”

To counter such pervasive Kremlin propaganda, Navalny suggests leveraging what he says is still very heavy use (86%+ of Russian adults) of Western social media platforms and messaging apps, name-checking YouTube, Instagram, WhatsApp, Google and Facebook — and flooding those platforms with “a huge national anti-war campaign,” starting with an ad campaign.

“200 million impressions per day to hit every Russian Internet user twice. Stories, posts and pre-rolls. Throughout Russia, in cities and villages. In every tablet and every phone,” he suggests, fleshing out a scenario in which Western ad platforms agree to be mobilized and weaponized against Putin’s aggression.

For his idea to work, Navalny says a nationwide ad campaign is needed — and also targeted ads specifically, with the Kremlin critic writing that when Google and Meta stopped selling ads inside Russia it “seriously complicated the work of the opposition.”

“After all, we need to agitate not supporters, but opponents and doubters. And when we could give well-targeted ads, it worked. We gave battle to Putin’s propaganda and won,” he goes on, suggesting that de facto opposition election wins were made possible with the help of targeted ads.

“In the last elections to the State Duma, our candidates won almost all the districts of Moscow and St. Petersburg, according to the protocols, and were stopped only by large-scale falsifications. And yes, it works not only in Moscow, but also in Siberia, and throughout the country. Checked.”

He then segues into arguing that stopping the war is “more important than any election” — before conceding the core difficulty with an idea that calls for the West to weaponize speech via adtech, even for an anti-war purpose.

“I understand that in a democratic system, the authorities cannot order @Google and @Meta to advertise for one and forbid it for the other,” he writes. “However, I urge @POTUS, @StateDept, @BorisJohnson, @EU_Commission, @JosepBorrellF, @vonderleyen, @finkd, @sundarpichai urgently to find a solution to crush Putin’s propaganda, using the advertising opportunities of social networks.”

The price of sending vast amounts of anti-war propaganda (200 million ad views, at least 300,000 clicks or 8 million video views) would cost the same as just one shot from a Javelin anti-tank missile ($230,000), Navalny also suggests, adding: “It is necessary to give an opportunity to honest and impartial media in Russian — @meduzaproject, @wwwproektmedia, @the_ins_ru, @mediazzzona, @istories_media, @bbcrussian, @dw_russian, @VOANews – to radically expand the audience through direct and well-targeted advertising, taking into account all the possibilities @Google and Facebook (@Meta).”

We reached out to Google and Meta for a response to Navalny’s suggestion but at press time neither company had responded.

Unsurprisingly, given its own, well-documented ad targeting propaganda playbook, the Kremlin itself seems wise to the risk that targeted advertising could be weaponized against it — also warning YouTube last month over what it described as anti-Russian “information attacks,” which it said were being spread on its platform.

Back in February, soon after Russia’s invasion of Ukraine had started, the state media regulator, Roskomnadzor, also put out a warning over “false” information it claimed was being spread via online ads using Google Ads contextual advertising — saying it had written to Google to complain about it, while also warning owners of domestic internet resources and ad networks that they’re risking a fine of up to 5 million rubles if found distributing “unreliable socially significant information.” It also warned it would block any internet resources found hosting such ads.

The persistence of YouTube inside Russia when other Western services have been blocked hints at how much power the video sharing platform has — power the Kremlin can and does harness for its own ends of course, as a major outlet for spreading its propaganda.

While Google blocked the Russian state media affiliated channels, RT and Sputnik, on YouTube across Europe, after an EU ban on their distribution last month, it notably initially left the channels running inside Russia itself. Although it later (on March 11) expanded the policy to block the channels globally — apparently deplatforming those channels inside Russia too.

In recent weeks, Roskomnadzor has stepped up a steady stream of public ire targeted at YouTube in relation to a number of channel suspensions — issuing a press release earlier this month, for example, in which it “demanded that the American company Google LLC, which owns the YouTube Internet service, immediately restore access to the Duma TV channel of the State Duma of the Russian Federation on its video hosting platform and explain the reason for the introduction of such restrictions.”

“The State Duma of the Federal Assembly of the Russian Federation is a representative and legislative body of power in the Russian Federation, one of the chambers of the Parliament. The blocking of the youtube channel of the state body, carried out by the administration of the video hosting, hinders the dissemination of information and free access to it,” the regulator went on, before accusing Google of adhering to “a pronounced anti-Russian position in the information war unleashed by the West against our country”; and accusing YouTube of being “a key platform for spreading fakes, discriminating against official Russian sources of information.”

In another of its press releases, dated April 7 of this month, the regulator says that since April 2020 it has identified around 60 “incidents” of YouTube “discriminating” against hosting content from Russian media, government, public and sports organizations and figures — including blocking the accounts or content of news agencies Russia Today, Russia 24, Sputnik, Zvezda, RBC and NTV among others.

In recent weeks the regulator has also started administrative proceedings against Google for not removing certain content from YouTube that the Kremlin wishes to purge — actions that may result in fines of several millions of roubles.

Given this stream of angry words directed at YouTube it’s interesting the Kremlin hasn’t moved to shutter domestic access to the platform entirely — which suggests it continues to play a strategically important role for distributing Putin’s propaganda domestically, even with some “enhanced” content restrictions in place.

In his thread, Navalny does not accuse Google of allowing YouTube to be a key conduit for Kremlin disinformation. But given he’s trying to encourage the tech giant to sign up to a cyber war against the Kremlin that might be his idea of being tactful.

Instead, he’s scathing in his criticism of the role of Russian tech giant Yandex in helping spread Putin’s messages — dubbing the local search giant the “main propagandist” of the war, bigger even than the TV channels that carry Putin’s messaging 24/7.

“News from their main page (and there is a solid shameless lie) is the main source of information for 41% of the population,” he specifically claims.

However the role that the company’s News product plays in amplifying Kremlin propaganda is impossible to deny — given the list of media sources news aggregators are authorized to link to is also controlled by the Russian state through a licensing regime overseen by Roskomnadzor.

Last month it emerged that Yandex is looking to step out of the increasingly risky media business by seeking a buyer for its News and Zen products. At the time, our sources suggested another local tech giant, VK, is a leading contender to acquire the products.

One key consideration is whether Yandex will actually remove the News product from its homepage post-sale — which, if it does, could potentially put a major dent in the Kremlin’s propaganda machine by removing a go-to news source for many Russians. But if Yandex continues to display the News feed on its homepage, i.e., by partnering with the new owner, there would be no change to Russians being shown a prominent feed of disinformation.

Any sale and operational changes by Yandex will need to be signed off by the Kremlin. The tech giant agreed to a restructuring back in 2019 that increased government influence over the company.

Despite that the IT giant has sought to claim a neutral stance, saying — in the case of News amplifying state propaganda — it has no choice but to abide by local media licensing laws.

Last year, Google — and Apple — also blamed “local laws” for their decision to remove a tactical voting app created by Navalny’s organization from their mobile app stores in Russia.