If you type “glowing skin” into the Google search bar, a picture of Julianne Moore does not immediately come up. But one should: The sixty-one-year-old actor, known for her roles in Still Alice, Far From Home, and Boogie Nights, exudes the type of effortless radiance that most beauty brands wish they could bottle. Her secret? A simple, consistent skincare routine (she doesn’t care much for the term ‘anti-aging’) and two big glasses of water with chlorophyll every morning. “Somebody told me a long time ago it helps your skin,” Moore tells Women’s Health.

Looking at her 20-year-old daughter, Liv Freundlich, it’s clear there are also some pretty fantastic genetics at play. Moore and Freundlich are both featured prominently in the campaign for Hourglass Cosmetics’ new Ambient Soft Glow Foundation, aptly titled “We Glow.” “It’s so beautiful because the entire thing is really all about how your beauty becomes enhanced by being with someone that you care about,” Moore says of the campaign, which features other iconic duos such as legendary choreographer Twyla Tharp alongside her mentee Destiny Wimpye and model and activitst mother-daughter duo Emiko Hawana and Marina Hawana-Strube. “To do this with my daughter was very special.”

And with several big projects in the works, including several films and an upcoming podcast series with Oscar Isaacs, it’s clear the world wants more of Moore. Here, she shares her perspective on the shifting attitudes toward aging in Hollywood, the online yoga class that’s keeping her grounded right now, and the advice she recently gave her son for growing his confidence. 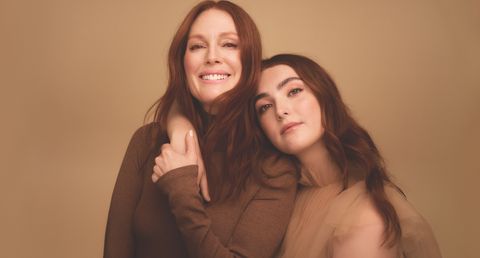 Julianne Moore and daughter Liv Freundlich are featured in the new campaign for Hourglass Cosmetics.

BU: Talk to us about your new partnership with Hourglass Cosmetics.

JM: I was so flattered when they came to me. They have beautiful, luxurious products that are cruelty-free and vegan. And there’s a female founder, so all of that felt very aligned with who I am and what I care about.

BU: Your daughter is featured in this new campaign—how has your relationship with her evolved?

JM: I still see my children as infants, and there are characteristics that have carried over as they’ve gotten bigger. I always try to be aware of that as they’re becoming young adult cells—that the same child is still in there, that little body I knew so intimately. But then you have to respect where they’re going personally. My daughter talks to me a lot about her relationships, and I feel lucky to be included in that because I think that’s the biggest part of her life right now. Generally, I’m just trying to be as present as possible.

BU: Your skin always looks fabulous—what are your glow secrets?

BU: Any other skincare products you love?

JM: I use a mild cleanser and I like face oils, like the one from Vintner’s Daughter. Sometimes I use a retinoid at night, and I love radio frequency facials. It’s a noninvasive way to take care of your skin. It really does work, but it requires consistency.

BU: How have your ideas about beauty evolved over the course of your career?

JM: It’s a weird business because obviously there is a physical part to it. But I think the biggest lesson is, don’t bemoan where you are now. Your physical self is the thing that you carry, so allow yourself to feel good about it and invest in it. But, most importantly, like where it is right now.

BU: It seems like attitudes toward aging in Hollywood are shifting—do you agree?

JM: Very much so. I remember when Isabella Rosselini was dropped from a beauty contract at age 40. That doesn’t happen anymore. People are being hired to represent brands who are much older than that, including me. That’s great. There’s now an awareness that interest in in self-care and beauty doesn’t end at a certain age. I think there’s more representation, certainly in films, and more people are interested in women’s stories at different parts in their lives. That’s a big, welcome change.

BU: Do you take issue with the term anti-aging?

JM: Well, it’s not really an option, right? Everyone ages. I hate the idea of aging gracefully. To me, that’s a clouded way of saying somebody looks still looks good, even for a certain age. There’s not a graceful or an un-graceful way to age. There’s simply the fact we are going to age and there shouldn’t be any kind of meaning put on it one way or another.

BU: When you’re feeling overwhelmed, how do you prioritize your mental health?

JM: Sometimes just articulating that can be helpful it. I just had a long conversation with a guy in my neighborhood about something that happened in the neighborhood, and I realized I felt a lot better afterward. Sometimes, you’ve got to get out your own head. I also like to play the spelling bee in The New York Times. I find it very soothing. It completely occupies my mind.

BU: Any workouts you’re into these days?

JM: I love my online yoga class. I take yoga from The Shala online. That’s been consistent and has been great for me. Any kind of massage like lymphatic draining massage is great. I feel so stimulated afterwards and then later that night, I’m so tired. So, I love any kind of body work. I have an osteopath, and that’s been very valuable to me too.

BU: Have any changes you’ve initiated during the pandemic stuck around?

JM: I think I’m better at checking in on people now. I’ll make a regular phone call to just see what’s going on in their lives. I didn’t really do that before the pandemic. That’s probably been the biggest change for me.

BU: I read that you’re, you’re starring in a scripted podcast series with Oscar Isaacs—are you a podcast person?

JM: Not really. I listen to lots of books on audible. One of the books I loved was called Ninth Street Women, which is all about female artists in the 20th century, like Elaine de Kooning, Grace Hartigan, and Lee Krasner and how their careers intersected with all these male artists. It was about 40 hours long. It’s something I probably wouldn’t have read because it was a sprawling history and I feel like I would’ve lost track.

BU: Any other projects you’re excited about?

JM: I’m very excited about these two movies that I’m going to start doing. One is with Lynne Ramsey called Stone Mattress, which is based on a short story. And then I’m doing another movie with Todd Hayes and Natalie Portman. And I also have a move coming out called Sharper on Apple.

BU: Was there ever a time when you had to overcome a challenge, and how did you do it?

JM: I think my whole career has been a challenge. I look back and I think, ‘What made me think I could do this?’ It’s crazy. I was telling my son about this the other day. He’s a composer and we were talking about building confidence. And I told him that the only you have control over is practice. And practice, in turn is what feeds confidence. I also kept my goals small. Keeping your goals small can make anything more manageable.

BU: Are you a morning person?

JM: I wish I did more. I get up naturally at 8:00, and I fall asleep around midnight. I drink way too much coffee. And then I read everything, I read all the news and my newsletters. I do The New York Times spelling bee. And before I know it, it’s time to go. I really enjoy that time.

This content is created and maintained by a third party, and imported onto this page to help users provide their email addresses. You may be able to find more information about this and similar content at piano.io