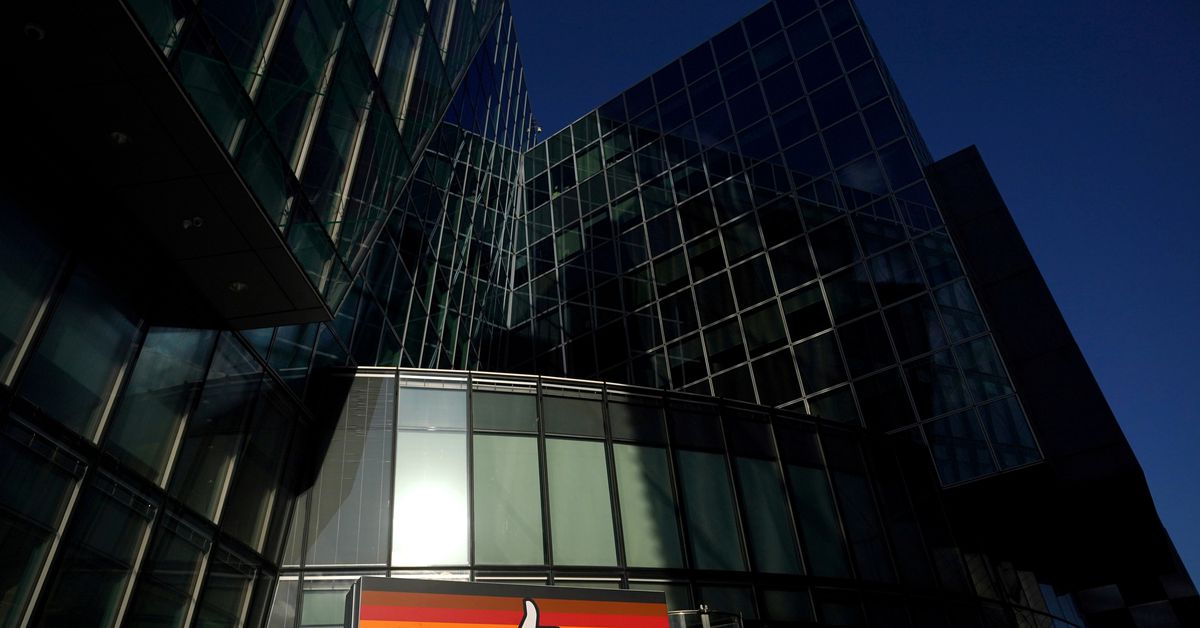 General view of the Facebook logo at its EMEA headquarters at Grand Canal Square in the Docklands in Dublin, Ireland, October 14, 2020. REUTERS/Clodagh Kilcoyne

DUBLIN, June 10 (Reuters) – The parts of Ireland’s economy that rely on the continued success of its multinational jobs machine are betting the deep roots some of the world’s biggest companies have laid down can see off the threat of a global corporate tax overhaul.

However a softening of Ireland’s decades-long tax advantage will show up deficiencies elsewhere when competing for foreign direct investment, most notably a persistent dearth of affordable housing.

In a major step toward a global deal, Group of Seven (G7) advanced economies agreed last weekend to squeeze more money out of multinational companies and reduce the allure of low-tax centres such as Ireland with its 12.5% corporate tax rate, backing a minimum global corporate tax rate of at least 15%. read more

Unlike in some other low-tax economies where companies also book large profits but have little presence, multinationals employ one in eight Irish workers. Some 10% of Facebook (FB.O)‘s 60,000 workforce are based in its European headquarters in Ireland.

For that reason Ireland’s finance minister said on Saturday he remained confident the country would continue to attract investment and jobs even if its low tax rate loses its lustre. read more

Executives routinely credit additional factors such as an English speaking, well educated workforce, membership of the European Union and a stable political environment in near weekly new job announcements in Ireland, a mantra that will be tested if the global tax deal is finalised.

“Some people throw their eyes to heaven a little bit when you mention the benefits of Ireland other than tax,” the Irish chief of Facebook, Gareth Lambe, told an American Chamber of Commerce Ireland event last month.

“Maybe each of those individually don’t compare to the tax benefit but combined they are huge and overwhelming,” said Lambe, currently the chamber’s president, describing Ireland as being in an “incredibly strong position”.

The finance ministry has forecast that corporate tax receipts are set to be around 20% or 2 billion euros lower than they otherwise would have been by 2025, due to the anticipated changes.

The sustainability of the number of multinational jobs that have almost doubled to 257,000 in the last decade is what is really at stake. The finance ministry has warned that Ireland’s attractiveness for inward investment could also be undermined. read more

Facebook is one of a number of large technology companies expanding their office space in Dublin having signed a 25-year lease in 2018 to construct a new 57,000 square metre campus.

Microsoft’s (MSFT.O) LinkedIn and Amazon are also expanding into campus-style sites while Google (GOOGL.O), which employs 8,000 people in Ireland, owns or leases nine buildings in the city.

Property consultants Knight Frank estimate Google, Facebook Microsoft and Amazon will occupy more space in Dublin by 2025 – 4.6 million square feet – than they currently do in London, even though the British capital has six times the population.

Ronan Group Real Estate, which is building Facebook’s campus as well as a new office for the 3,000 people that U.S. cloud software maker Salesforce (CRM.N) plans to employ in Ireland by 2023, remain “very bullish on the Dublin market” in the face of the tax challenge and the expected continuation of more working from home beyond the COVID-19 pandemic.

“When you talk to the executives, tax is a factor but it’s not the main factor. In terms of the demand for offices in Dublin, I don’t think it will have a significant impact,” Ronan Group Chief Executive Rory Williams told Reuters.

The Ronan Group is currently locked in a battle with local planners in a bid to build taller office and residential blocks in Dublin, just one part of Ireland’s myriad of housing problems that could scare off the next Facebook.

Ireland has fallen well short of meeting housing demand each year since an enormous property crash over a decade ago. The mismatch has made Dublin rents among the highest in Europe.

The country’s main business lobby group, Ibec, has said the impending weakening of the tax advantage means the government must invest in areas Ireland is “not as strong on,” namely university funding, research and development and housing.

“I think tax was possibly a bigger issue for a lot of these companies coming to Ireland 15 or 20 years ago,” Kevin Nowlan, the head of Ireland’s largest stock market-listed office landlord Hibernia REIT (HBRN.I), told Reuters.

“The biggest issue is the housing situation,” said Nowlan, whose tenants include Twitter (TWTR.N) and U.S. software company HubSpot Inc (HUBS.N). “We really need to get on top of resolving that.”