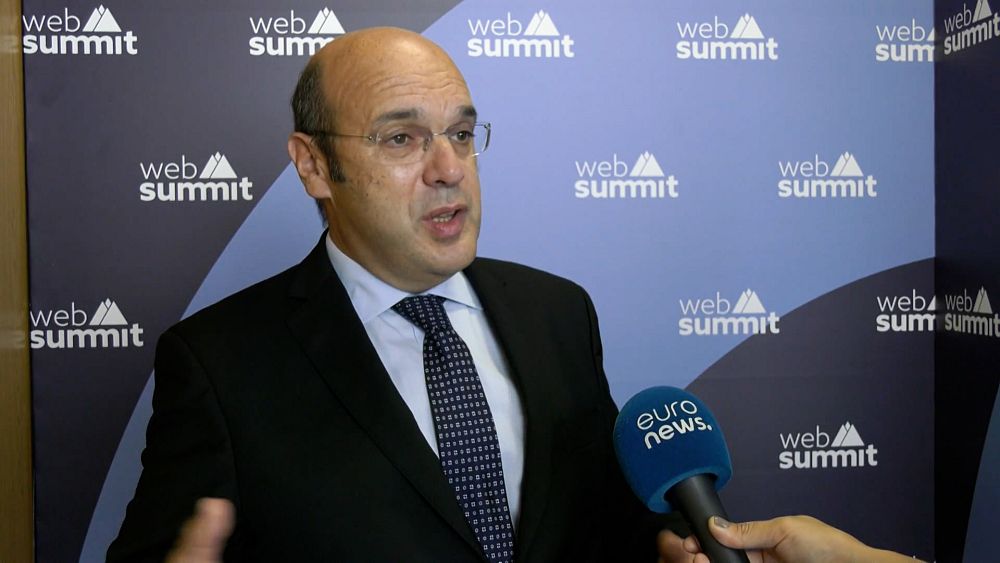 Having been the home of the global tech event Web Summit for the last five years, it seems only natural that Portugal would also be at the vanguard of Europe’s digital transformation.

But at a time when the climate crisis is the most pressing issue of the day, addressing environmental concerns has become key to how the country is using technology to meet those digital ambitions.

“The way to accelerate the green transition is, of course, by investing in digital technologies,” Portugal’s Minister of State for the Economy and the Digital Transition, Pedro Siza Vieira, told Euronews Next at Web Summit in Lisbon.

“They [digital technologies] help you to better manage resources, to better use your water and to manage complex networks of energy,” he said.

Since 2015, Portugal has invested heavily in renewable energy with new solar and floating wind plants. Currently, around 65 per cent of all the electricity consumed in the country comes from renewable sources.

“I think we have a very large penetration of renewable electricity, which has been instrumental not only to make sure that we meet our targets in terms of emissions but also that we reduce volatility on prices of electricity,” Siza Vieira said.

The minister added that electricity prices in Portugal will actually be lower next year as the country is much less dependent upon the costs of raw materials such as oil and gas.

New technologies are not only helping in the fight against climate change but also improving the running of the Portuguese government.

“I think that government has a lot of benefits by using digital technologies to become more transparent, effective and efficient,” Siza Vieira said, adding there is still more work to do.

“We realised that we needed to work on a number of topics, such as the infrastructure and 5G technology, to make sure that we have the artificial intelligence, data science, supercomputing capabilities developed in the country because that would catalyse the transformation”.

He said the government has been rolling out this technology and that the European Union’s next-generation fund has accelerated the country’s advancement.

The government has also been working to devise a so-called “European start-up nation standard” for the Portuguese presidency of the European Council.

“We came up with the commitment to align the standards, the basic framework, legal-wise, visa-wise, tax-wise, that countries which have a very vibrant start-up scene recognise and we devise this European start-up nation standard and we set up the European start-up alliance, which is based in Lisbon and we will try to use this to become a start-up continent across Europe,” Siza Vieira said.

He says Portugal has been successful on the digital front due to the spirit of its entrepreneurialism.

“We currently have five unicorns and I think we will get larger numbers in the next few weeks, which is way above the weight of Portugal in the European economy if you compare it with some 300 unicorns across Europe,” Siza Vieria added.

Another reason he says the country has flourished is that it has been successful in attracting investment from companies that want to take advantage of people’s skills in Portugal.

How is Portugal trying to lead the digital transition?

But Portugal is also focused on the older generation and those who are less tech-savvy.

The government published its Action Plan for the Digital Transition in April 2020, just before the effects of the pandemic fully hit Europe.

The plan centres on the digital empowerment of people, the digital transformation of companies and the digitisation of the State.

“I would say that the most critical topic is about skills and it’s about the people, not only because we still have a lack in terms of training, particularly for the older generations in comparison to the rest of Europe,” Siza Vieira said.

One of the ways the government is aiming to ensure all citizens can reap the rewards of technology is through training and the other is trying to teach basic digital skills such as paying bills online.

The government is aiming to reach one million people – roughly 10 per cent of Portugal’s population.

“We cannot have a digital economy if we do not have the people at large being able to use those technologies, but also because we must make sure that no one is left behind on this transformation,” he said.