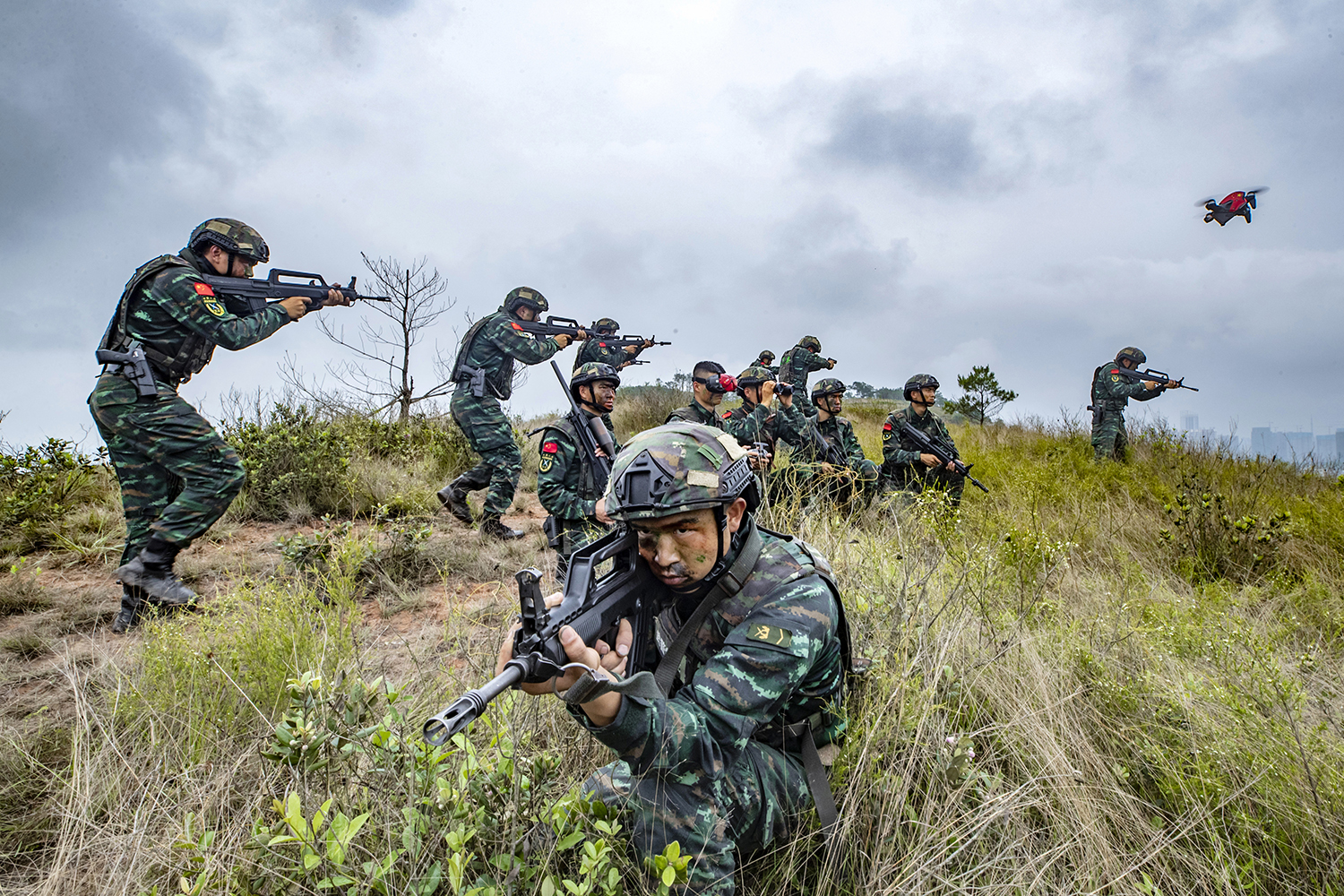 Chinese soldiers participate in a drill.

Realist IR theories focus on power, and for decades, they maintained that the bipolar world of the Cold War and the unipolar post-Cold War world dominated by the United States were relatively simple systems not prone to wars of miscalculation. They also held that nuclear weapons raised the cost of conflict and made war among the major powers unthinkable.

Meanwhile, liberal theorists argued that a triumvirate of causal variables (institutions, interdependence, and democracy) facilitated cooperation and mitigated conflict. The dense set of international institutions and agreements (the United Nations, the World Trade Organization, the Nuclear Non-Proliferation Treaty, etc.) established after World War II—and expanded and depended on since the end of the Cold War—provided forums for major powers to work out their differences peacefully.

Moreover, economic globalization made armed conflict too costly. Why quarrel when business is good and everyone is getting rich? Finally, according to this theory, democracies are less likely to fight and more likely to cooperate, and the major waves of democratization around the world over the past 70 years have made the globe a more peaceful place.

At the same time, constructivist scholars explained how new ideas, norms, and identities have transformed international politics in a more positive direction. In the past, piracy, slavery, torture, and wars of aggression were common practices. Over the years, however, strengthening human rights norms and taboos against the use of weapons of mass destruction placed guardrails on international conflict.

Unfortunately, nearly all of these pacifying forces appear to be unraveling before our eyes. The major driving forces of international politics, according to IR theory, suggest that the new Cold War among the United States, China, and Russia is unlikely to be peaceful. 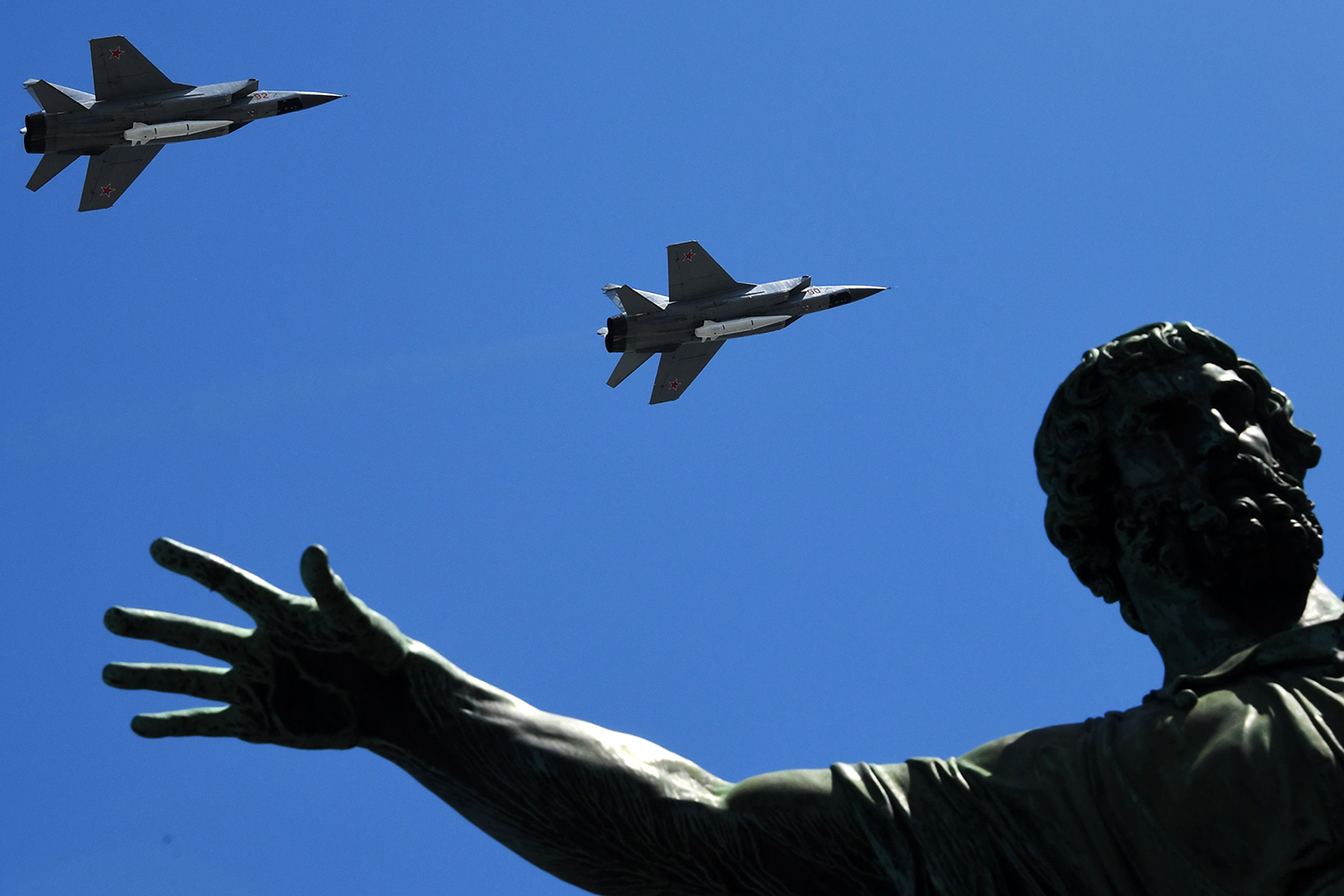 Let us begin with power politics. We are entering a more multipolar world. To be sure, the United States is still the world’s leading power, according to nearly all objective measures, but China has risen to occupy a strong second-place position in military and economic might. Europe is an economic and regulatory superpower in its own right. A more aggressive Russia maintains the largest nuclear weapons stockpile on Earth. And major powers in the developing world—such as India, Indonesia, South Africa, and Brazil—are choosing a nonaligned path.

Realists argue that multipolar systems are unstable and prone to major wars of miscalculation. World War I is a classic example.

Multipolar systems are unstable in part because each country must worry about multiple potential adversaries. Indeed, at present, the U.S. Defense Department frets about possible simultaneous conflicts with Russia in Europe and China in the Indo-Pacific. Moreover, U.S. President Joe Biden has stated that the use of military force remains on the table as a last resort to deal with Iran’s nuclear program. A three-front war is not out of the question.

Wars of miscalculation often result when states underestimate their adversary. States doubt their opponent’s power or resolve to fight, so they test them. Sometimes, the enemy is bluffing, and the challenge pays off. If the enemy is determined to defend its interests, however, major war can result. Russian President Vladimir Putin likely miscalculated in launching an invasion of Ukraine, incorrectly assuming that war would be easy. Some realist scholars warned for some time that a Russian invasion of Ukraine was coming, and there is still the possibility that the war in Ukraine could spill across NATO’s borders, turning this conflict into a direct U.S.-Russia conflagration.

In addition, there is the danger that Chinese President Xi Jinping might miscalculate over Taiwan. Washington’s confusing “strategic ambiguity” policy as to whether it would defend the island only adds to the instability. Biden has said he would defend Taiwan, but his own White House contradicted him. Many leaders are confused, including possibly Xi. He might mistakenly believe he could get away with an attack on Taiwan—only to have the United States intervene violently to stop him.

Moreover, after several U.S. presidents have threatened “all options on the table” for the Iranian nuclear program without backing it up, Tehran might assume that it can make a dash for the bomb without a U.S. response. If Iran is mistaken in doubting Biden’s resolve, war could result. 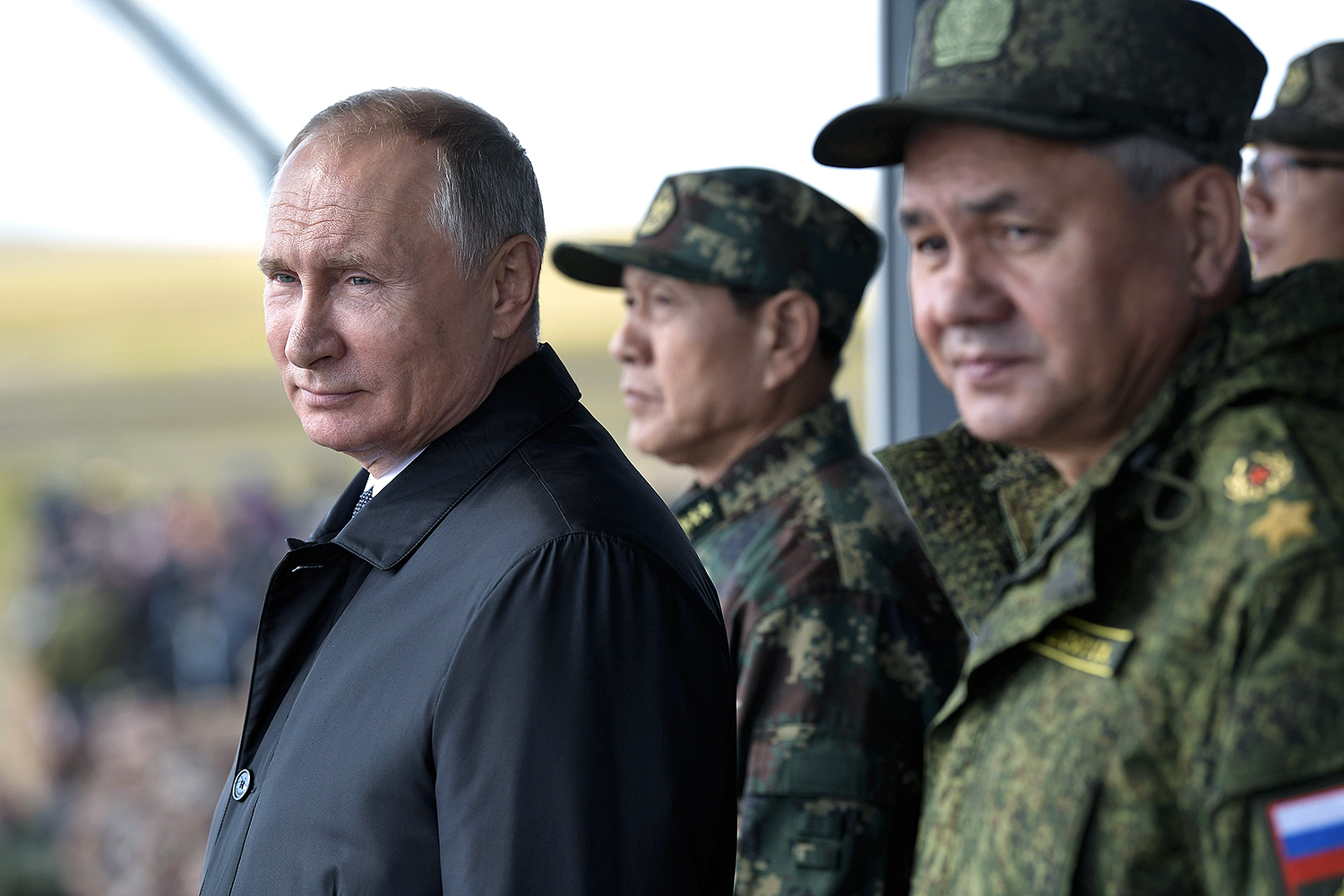 Realists also focus on shifts in the balance of power and worry about the rise of China and the relative decline of the United States. Power transition theory says that the fall of a dominant great power and the rise of an ascendant challenger often results in war. Some experts worry that Washington and Beijing may be falling into this “Thucydides Trap.”

Their dysfunctional autocratic systems make it unlikely that Beijing or Moscow will usurp global leadership from the United States anytime soon, but a closer look at the historical record shows that challengers sometimes start wars of aggression when their expansive ambitions are thwarted. Like Germany in World War I and Japan in World War II, Russia may be lashing out to reverse its decline, and China may also be weak and dangerous.

Some people might argue that nuclear deterrence will still work, but military technology is changing. The world is experiencing a “Fourth Industrial Revolution” as new technologies—such as artificial intelligence, quantum computing and communications, additive manufacturing, robotics, hypersonic missiles, directed energy, and others—promise to transform the global economy, societies, and the battlefield.

Many defense experts believe we are on the eve of a new revolution in military affairs. It is possible that these new technologies could, like tanks and aircraft on the eve of World War II, give an advantage to militaries that go on the offense, making war more likely. At a minimum, these new weapons systems could confuse assessments of the balance of power, contributing to the above risks of miscalculation.

China, for example, is leading in several of these technologies, including hypersonic missiles, certain applications for artificial intelligence, and quantum computing. These advantages—or even the false perception in Beijing that these advantages might exist—could tempt China to invade Taiwan. 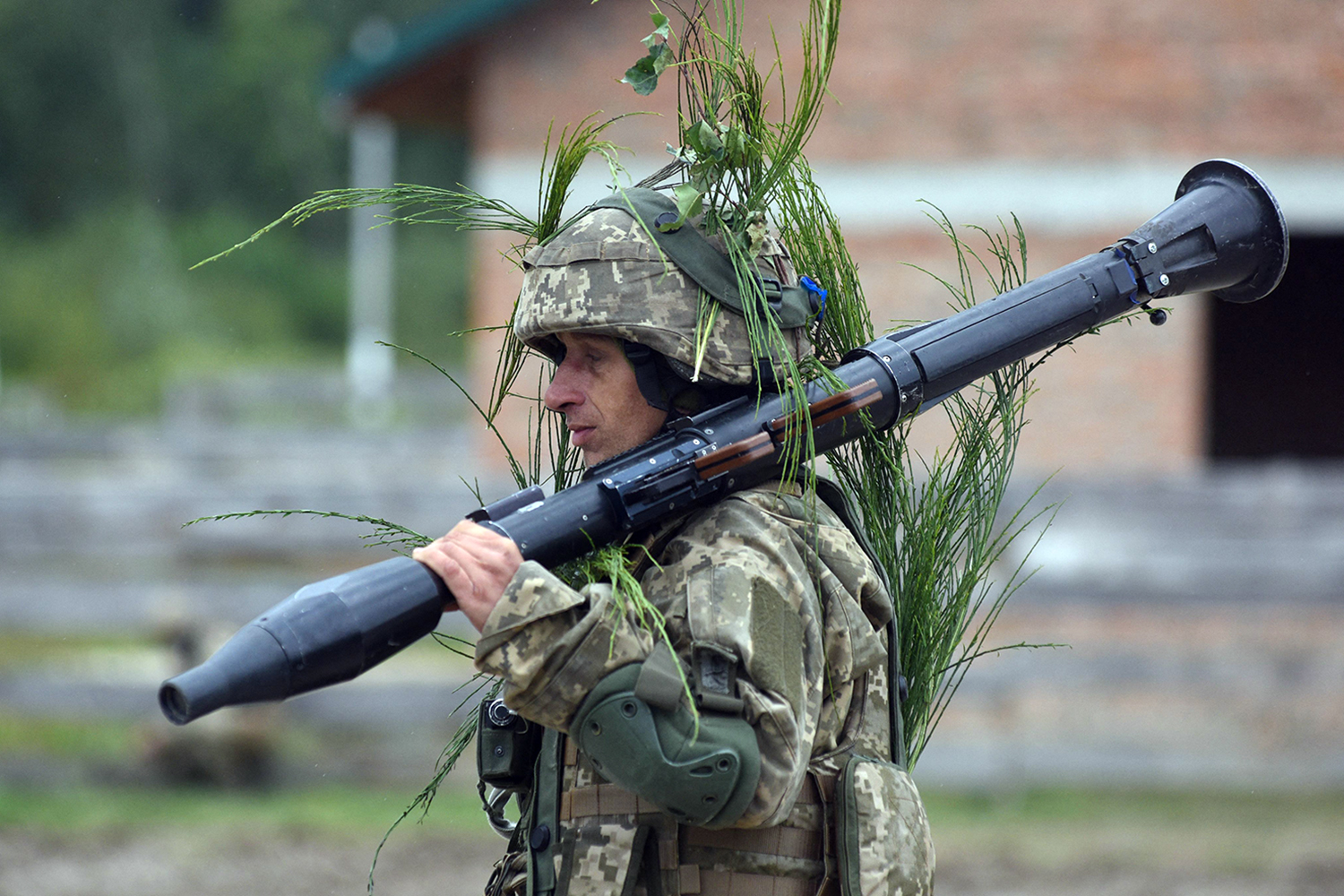 A Ukrainian serviceman holds a weapon.

A Ukrainian serviceman takes part in the joint Rapid Trident military exercise with the United States and other NATO countries not far from Lviv, Ukraine, on Sept. 24, 2021, as tensions with Russia remain high over the Kremlin-backed insurgency in the country’s east.YURIY DYACHYSHYN/AFP via Getty Images

Even liberalism, a more optimistic theory in general, provides a reason for pessimism. To be sure, liberals are right that institutions, economic interdependence, and democracy have facilitated cooperation within the liberal world order. The United States and its democratic allies in North America, Europe, and East Asia are more united than ever before. But these same factors are increasingly sparking conflict on the fault lines between the liberal and illiberal world orders.

In the new Cold War, international institutions have simply become new arenas for competition. Russia and China are infiltrating these institutions and turning them against their intended purposes. Who can forget Russia chairing a meeting of the United Nations Security Council as its armies invaded Ukraine in February? Similarly, China used its influence in the World Health Organization to stymie an effective investigation into COVID-19’s origins. And dictators vie for seats on the U.N. Human Rights Council to ensure their egregious human rights abuses escape scrutiny. Instead of facilitating cooperation, international institutions are increasingly exacerbating conflict.

Liberal scholars also argue that economic interdependence mitigates conflict. But this theory always had a chicken-and-egg problem. Is trade driving good relations, or are good relations driving trade? We are seeing the answer play out in real time.

The free world is recognizing that it is too economically dependent on its enemies in Moscow and Beijing, and it is decoupling as fast as it can. Western corporations pulled out of Russia overnight. New legislation and regulations in the United States, Europe, and Japan are restricting trade and investment in China. It is simply irrational for Wall Street to invest in Chinese technology companies that are working with China’s People’s Liberation Army to develop weapons intended to kill Americans.

But China is also decoupling from the free world. Xi is prohibiting Chinese tech firms from listing on Wall Street, for example, because he doesn’t want to share proprietary information with Western powers. The economic interdependence between the liberal and illiberal worlds that has served as a ballast against conflict is now eroding.

Democratic peace theory says democracies cooperate with other democracies. But the central fault line in the international system today, as Biden explains, is “the battle between democracy and autocracy.”

To be sure, the United States still maintains cordial relations with some nondemocracies, such as Saudi Arabia. But the world order is increasingly divided with the United States and its status quo-oriented democratic allies in NATO, Japan, South Korea, and Australia on one side and the revisionist autocracies of China, Russia, and Iran on the other. One does not need a stethoscope to detect the echoes of the free world’s conflict against Nazi Germany, fascist Italy, and imperial Japan. 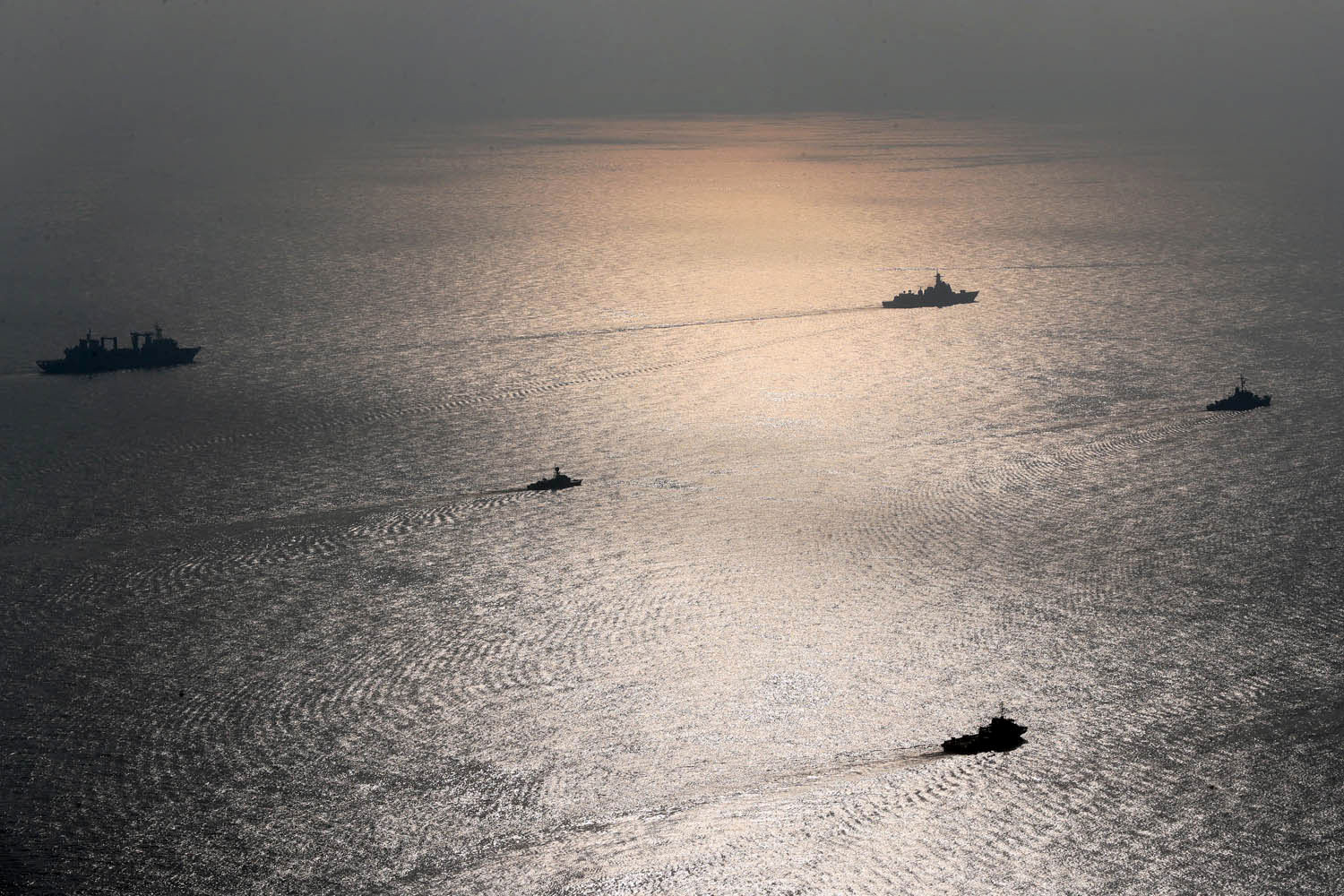 Iranian, Russian, and Chinese warships participate in a joint military drill in the Indian Ocean on Jan. 21.Iranian Army Office/AFP via Getty Images

Finally, constructivist arguments about the pacifying effects of global norms were always plagued with doubts about whether these norms were truly universal. As China engages in genocide in Xinjiang and Russia issues bloodcurdling nuclear threats and castrates prisoners of war in Ukraine, we now have our gruesome answer.

Moreover, constructivists might note that the democracy versus autocracy cleavage in international politics is not simply an issue of governance but of ways of life. The speeches and writings of Xi and Putin are often ideological rants about the superiority of autocratic systems and the failings of democracy. Like it or not—we are back in a 20th-century contest over whether democratic or autocratic governments can better deliver for their people, adding a more dangerous ideological element to this competition.

Fortunately, there is some good news. The best understanding of international politics may be found in a combination of theories. Much of humanity prefers a liberal international order, and this order is only made possible by the realist military power of the United States and its democratic allies. Moreover, 2,500 years of theory and history suggest that democracies tend to win these hard-power competitions and autocracies flame out disastrously in the end.

Unfortunately, the clarifying moments that bend history in an arc toward justice often only emerge after major-power wars.

Let’s hope that today’s incoming students are not reminiscing at their graduation ceremonies about where they were when World War III began. But IR theory gives us plenty of reasons to be concerned.